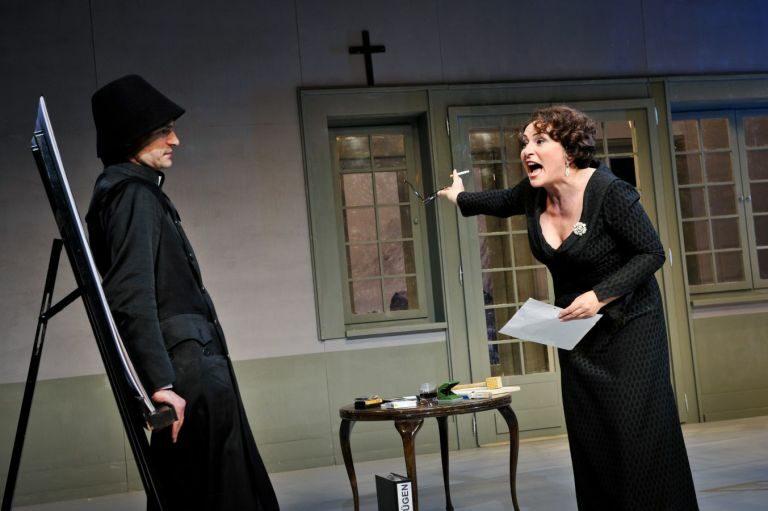 I’ve complained a lot in previous reviews about directors staging tragedies as comedies. But Sebastian Kreyer’s staging of Ibsen’s Ghosts was much funnier than I expected, and I didn’t mind at all. I suspect this is because it was structured opposite of many of the stagings I dislike. Those often begin seriously and then degenerate. This is silly at the beginning but eases up on the gags as the truth about Captian Alving’s dissolute lifestyle and Oswald’s deadly disease becomes more and more apparent. This is both more respectful of the play’s serious themes and better for the show’s pacing. (It isn’t slowed down by gags in key dramatic moments.) 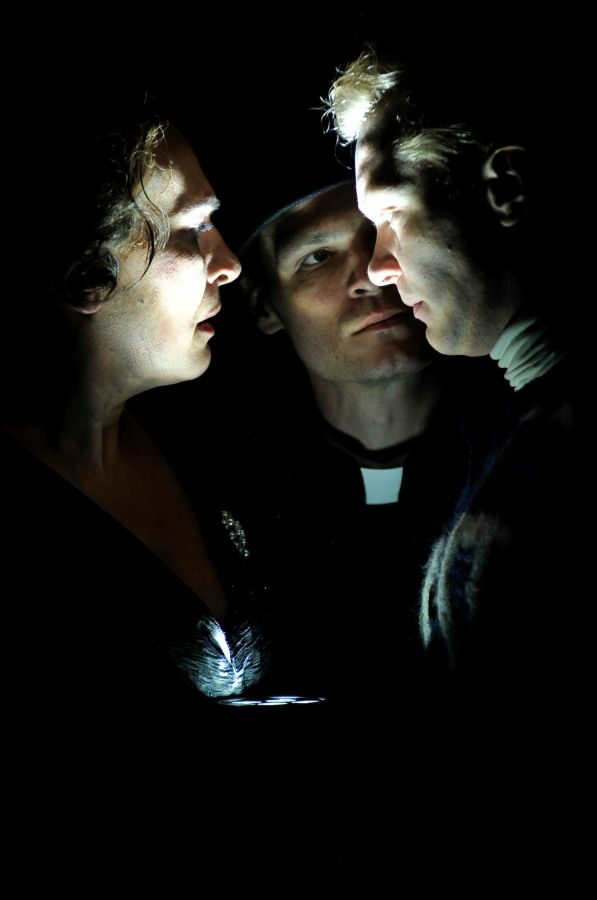 Oh, Kreyer’s choices aren’t always perfect. The pastor’s constant falls aren’t funny (though his malapropisms are), and showing young Oswald and Oswald’s father (in a silly manner—as a miniature twin of current Oswald and a grey-bearded current Oswald, respectively) as they are discussed seems cheap, given the seriousness of what is being talked about.

But a lot of decisions I would have scoffed at on paperwork really well. Everyone sings, and the songs are well-chosen and inserted at appropriate moments. (And oh my goodness Max Wagner’s voice is glorious.) (But why Mara Widmann seems to be plugging The Three-penny Opera is anyone’s guess.) The metatheatrical moments—the pastor’s apology to the audience for his harshness towards Helene; the maid’s informing Helene of her visitor by announcing “Ursula Burkhart to the stage, please”; and Helene’s comments about “what [her doctor] Ibsen thinks” cause laughs without being overly distracting. Helene’s fishing trip is a riot. (Why is she putting on a yellow rain jacket and hat? It only makes sense when she comes back with the fish Oswald requested.) And Oswald’s deteriorating health and frustration with his artistic impotence are beautifully represented by his interactions with a bucket of paint. He partially strips, paints on himself, sticks paper onto his paint-covered body, and smears paint on the walls—destroying his mother’s orderly house and doing everything but actually painting with his materials. 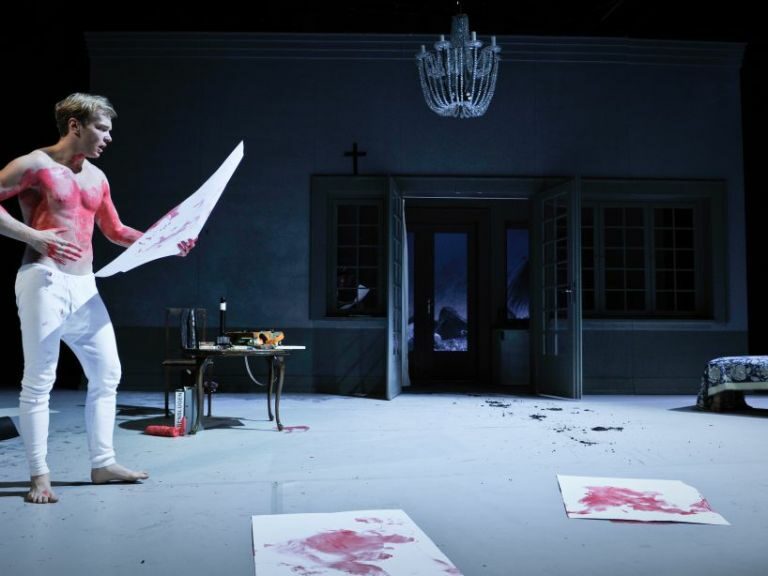 And the ending! We’re deprived of Helene’s iconic scream, but it’s okay because we got a scream at the beginning. (I was initially upset about the starting-at-the-end cliche, but it wasn’t that. Regina was screaming in the dark because she was startled by Engstrand. The resemblance to the play’s usual ending is just an in-joke for Ibsen cognoscenti.) Instead, Oswald stands at the microphone and runs through all his lines for the play, with longer pauses, more difficulty remembering them, and more tears as he goes on. It’s a quiet ending, but a very moving one. To me, it makes Oswald’s pain more immediate, as his mental deterioration seems to extend to the actor who plays him.

Even in utterly absurd stagings, the Volkstheater has the best ensemble in Munich. Not the best individual actors—the Residenztheater has definitely snapped up many of those. But the actors at the Volkstheater play off each other so well. This is definitely true of Ghosts. Ursula Burkhart (Helene), Max Wagner (Oswald), Oliver Möller (the pastor), and Mara Widmann (Regine) are locked in a death-dance, and no one misses a beat. Burkhart and Wagner are the stand-out stars—inevitable thanks to the intensity of their roles—but Möller also makes an especially good showing as the naive pastor (who is apparently a chosen hearer of God’s voice, which emerges from speakers above the stage).

This is the Volkstheater, so by the end of the play, the stage was covered in water, champagne, pink paint, mud, and (apparently real) fish guts. (Side note: At some point, I need to write something more extensive about German directors’ obsession with messiness and disgust. I feel like those don’t get much play on U.S. stages, and so many stagings use them here.) But the descent into chaos matched the rhythm of the play, so for once it didn’t bother me. I was too busy crying for Oswald.

This review originally appeared in My German Season on February 4, 2015, and has been reposted with permission.