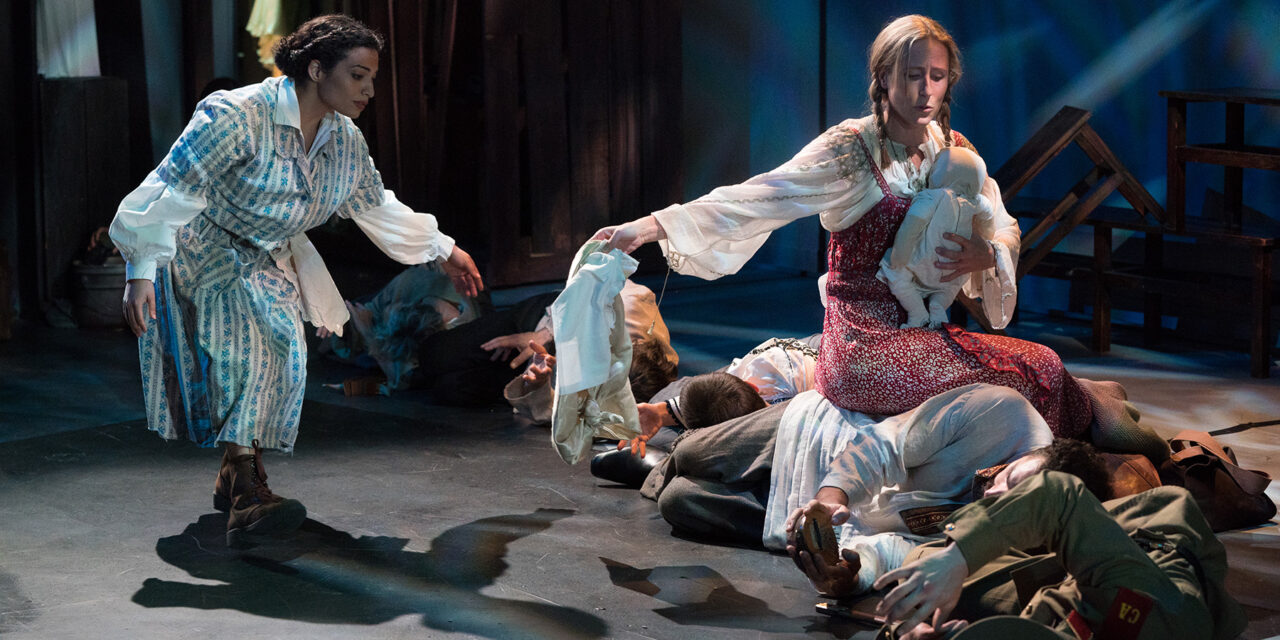 Bertholt Brecht and his theories of alienation and Epic Theater can turn some theater-goers off at the very mention of his name but the wisest of those will overcome whatever assumptions they have to see The Caucasian Chalk Circle at Antaeus Theatre Company.  Director Stephanie Shroyer has taken masterful hold of Alistair Beaton’s translation of the play with a diverse Ensemble that feel quite comfortable in their many changing roles while never letting us escape the emotional experience nor forget what is at stake.  While war breaks out and a regime is usurped via beheading and revolt, a baby is abandoned and a young woman named Grusha Vachnadze (Liza Seneca) is unable to leave it behind even though it means she must run from soldiers and hide the child Michael, risking her own love and future happiness with soldier Simon Chachava (Michael Khachanov). 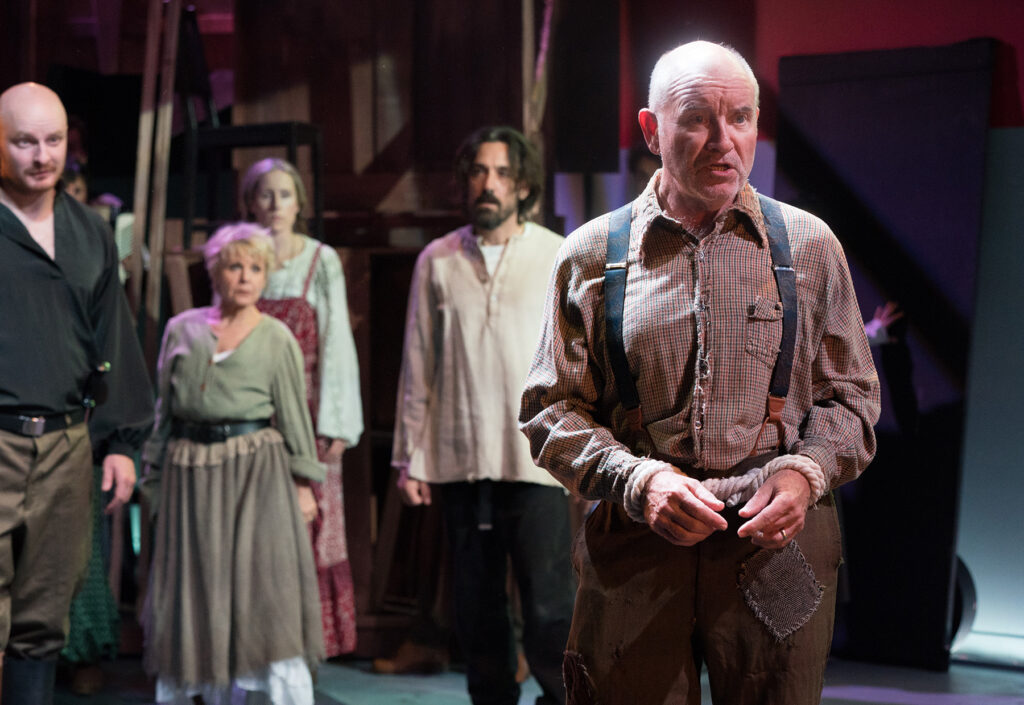 The show begins in the lobby so be sure to avoid the temptation of the company’s lovely library adjacent to it and opt for a spot closer to the doors to avoid missing anything.  After a brief public meeting regarding land use, Arkady Chaidze (Steve Hofvendahl) arrives and the Ensemble invites us into the theatre to watch his performance.  Without too much effort, we have been turned into townspeople and fellow citizens of the actors in a way that makes us feel we are a part of something now.  As might be expected, the playing space is stripped of flats and curtains to become an open arena with no place for the actors to hide.  When they are not on stage playing their various roles, they can be spotted playing a musical instrument for their fellow actors or openly changing their costume to morph from one role into another.  What looks like a door to the dressing rooms is also open upstage left.  Once we are inside, we are all in on the illusion of camaraderie that is slightly broken at intermission when stagehands dressed in black appear to set up for the second act.

The moment the cast is back we can easily slip back into their world that is full of beautiful physical work in every scene.  Ensemble members lie on their sides in a row, their head on their fellow actors’ feet, their hands moving each in their own particular way with some making sound effects to complete the image of a flowing river or stream.  Scene changes meld into the action without a hitch as benches, suitcases and one moving set piece that glides past and around to become several small houses, a carriage and one hotel without a single change to its appearance.  In the moment when Grusha stands on a bench and comes to a dangerous footbridge in winter at night with everyone around her promising she can only fall, she puts the child in her backpack as her fellow actors surround her, taking her arms – and then taking her feet as she steps off the bench, one foot at a time, and she crosses the bridge, suspended in mid-air.  It’s one of the most exciting choices I’ve seen in quite a while. 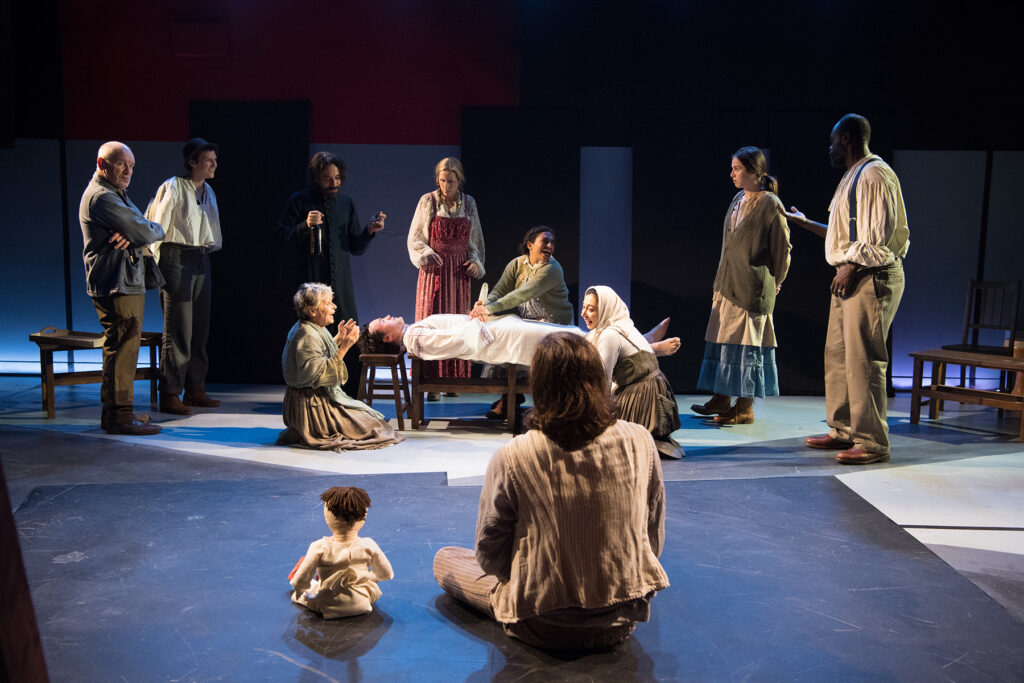 The child is a beautifully crafted and seemingly articulated doll with at least two versions – one baby and then a toddler.  Gabriela Bonet (she also plays The Singer, Jussup’s Mother, and others) brings the toddler to life in several moments but two are mesmerizing.  The first is when Grusha’s brother Lavrenti Vachnadze (Alex Knox) comes to meekly inform her that she must prepare to leave for his wife Aniko (Claudia Elmore, who also plays the peasant woman’s polar opposite as The Governor’s Wife) is not happy.  Gabriela sits behind the toddler and animates his arms to play with Grusha’s shawl while every so often looking up at the adults in the room and reacting to what is being said.   The second is in the courtroom when Azdak orders the child to be placed in the middle of the circle drawn in chalk and then orders the two women vying for the role of mother to pull the child out of the circle; whoever does it first, wins. Using her feet to move the doll’s feet forward, she brings the boy to life and makes us gasp when The Governor’s Wife and Grusha are ordered to pull.

The translation sounds modern and does not shy away from profanity.  It makes Grusha’s situation feel all the more dangerous when the Sergeant (Troy Guthrie) threatens her and calls her a bitch.  It makes the judge Azdak (Hovfendahl) frankly sound a bit too familiar perhaps as he asks for donations, talks about Grusha in terms of her being an attractive person and fines others for the same bad language he employs freely.  Justice is only just in the end because it dissembles – Azdak is no more qualified to be a judge than Grusha might be and he uses that lack of qualification to grant her custody of Michael.  He then follows it up by ‘mistakenly’ annulling Grusha’s marriage to Jussup (Guthrie), thereby ensuring she can finally be with her love Simon Chachava.  Her dreams come true… even though the elderly couple who were begging for their divorce are denied their own.  The Ensemble comes together in one final song where we are reminded of the “wisdom of the ages:  That everything belongs by right to those who care for it:”.  It’s a reminder we all can use.  It’s wisdom we should not forget. 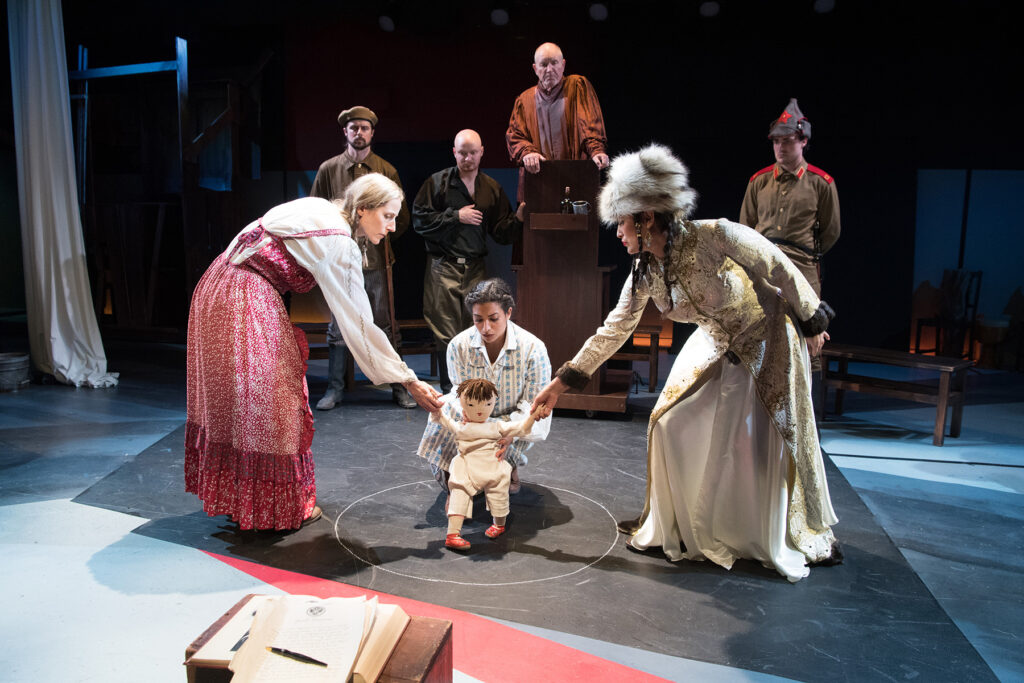