Fun Home, the multi-Tony award winning musical is making its Boston début at SpeakEasy and a fine show it is. Adapted from Alison Bechdel’s popular graphic chronicle of the same name, the musical whose book and lyrics were written by Lisa Kron and the music composed by Jeanine Tesori tells the story in an unusual and nonlinear way.

The character of Alison is played by three different actresses at three different stages of her life. First, we meet the adult 43-year-old Alison (Amy Jo Jackson) who is in the throes of writing her autobiography and recalling the events of her life that made her the person she is today. It is those events that create the story. In the opening scene Small Alison (Marissa Simeqi), a girl about eight, sings of her need for her daddy Bruce introducing a life-long frustration. Bruce (Todd Yard), a closeted gay man, spends much of his time restoring houses, particularly his own, to their initial beauty. Alison and her two younger brothers John (Luke Gold) and Christian (Cameron Levesque) are expected to help their father who is often brusque with them. Todd Yard captures Bruce’s narcissism in the song Not Too Bad.

Bruce, a bibliophile, teaches English at the local high school in the small Pennsylvania town where the family lives. He is also in charge of a funeral parlor the family business he has inherited, the fun home of the title. In an extremely funny scene, the kids perform their pseudo commercial Come To The Fun Home dancing on top of a casket.

The other member of the family is Helen (Laura Marie Duncan) Bruce’s unhappy wife, also a teacher, who finds pleasure in acting with the local amateur group. Duncan is excellent, but unfortunately, the role is not as long as she deserves. However, towards the end of the show, she sings the powerful Days And Days in which she describes her experience as a wife and mother. Although she thought Bruce loved her at the beginning of their marriage, she soon found out that he was using her to cover up his affairs with young men. Bruce is chronically angry with Helen, frequently calling her a bitch.

When Medium Alison goes off to college, she discovers she is a lesbian in a bookstore where she comes upon a book that explains her feelings. Throughout her life, she has rebelled against society’s expectations of girls. This manifested itself particularly in her dislike of feminine clothing, which led to quarrels with her father who wanted her to wear girly outfits. Not long after her realization, she meets Joan (Desiré Graham) and the two fall in love. Alison writes to her parents about the relationship. At first neither answers, but eventually, Bruce calls her and is uninformative and condescending. Helen takes the phone and tells Medium Alison about her father’s affairs.

The adult Alison relives the last time she saw her father and they took a ride together. She thought that during the drive they would confide in each other, but Bruce’s interest as always remained himself. She sings Telephone Wire which expresses her disappointment. Not long after the incident, he died, but not before sending her letters saying he is jealous of the “new freedom” of gay people at college and also expressing his fear of “falling into nothingness.” According to Alison, he committed suicide by stepping in front of a truck. It is a very gripping work both funny and sad.

The cast is composed of triple threats who act, dance and sing with skill. Special kudos go to Amy Jo Jackson for her sterling performance. Cristina Todesco’s set is in the round with the orchestra stage right in full view of the audience. It is a very flexible set that changes places with ease. The family’s ornately decorated home with its enormous bookcase makes it easy to imagine Bruce planning the renovations.

This article was originally published in Captial Critic’s Circle on October 29, 2018, and has been reposted with permission. 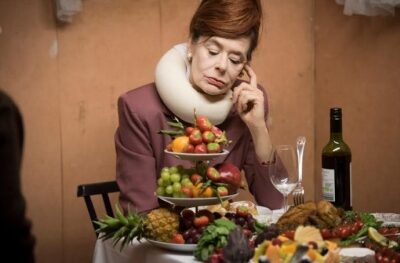