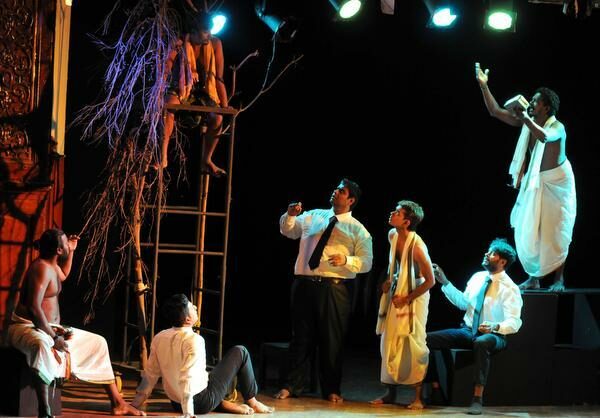 Vandichodai by Koothuppattarai is all about deep philosophy and questioning societal norms.

The conflicting realities of the past, present and future can be intriguing. Is history someone’s interpretation of truth or purely his/her imagination? Hard work vs. smart work. Intellectuals/scholars vs. strategists/businessmen. Class division and suppression in society across centuries… These were some of the existential realities dealt with in Vandichodai, the concluding play of The Hindu Theatre Fest.

Be it medical practitioners of the past who were trained in the guru-sishya tradition clad in traditional garments or the new-age strategists and businessmen wearing western outfits and educated in premier institutions, the conflicts continue. What rules? Bookish knowledge or lessons taught by experience? Will the teacher teach everything that one needs to know? Can one practice a profession with mere bookish knowledge? Where do professional ethics come in?

These issues are juxtaposed with the road-layer who toils hard in the sweltering sun. Not just for one day or week or month, but for generations. Why is he not emancipated? What stops him from evolving? And, why is his truth brushed off as false? Should one only continue the family profession? Is the road digger/layer blessed to be a chiranjeevi (one who is immortal) only so that he can procreate labourers, agricultural workers and party cadres? The irony of an immortal being who cannot evolve!

In the play, the group of scholars/intellectuals from the past and the present has the ability to interpret anything in the manner it thinks right for the situation. The uneducated, hardworking labourer, on the other hand, always speaks the truth. The scene where the two groups persuade the shepherd on the tree to climb down is an example. The upper class dictates terms, and tells him what to do; rather, what he’s worthy of doing.

The metaphor of the lone goat that escapes the butcher’s knife was portrayed beautifully. Rarely can a labourer access education; it is an exception.

That goat evolves into a human being and then becomes a scholar. But, ironically, a road-layer who can even dig through a mountain and play a significant role in human emancipation, cannot himself traverse that road to evolution.

Koothu-p-Pattarai, known for its stylised performances with song and dance and movements, failed to connect with the audience in Vandichodai. The dialogues were inaudible, at times. And, a play that had some poignant moments failed to make a wholesome impact.

The Title Sponsor of the event is YES BANK. The Associate Sponsors are Kauvery Hospital, Hindustan International School and Telangana Tourism. The Hospitality Partner is Taj Coromandel. The Mall Partner is Phoenix Market City (Chennai). The Mobility Partner is Ola. The gift partner is Terra Earthfood. The Radio Partner is Radio City 91.1. The Merchandise Partner is Focus Art Gallery and the Event Manager is evam. 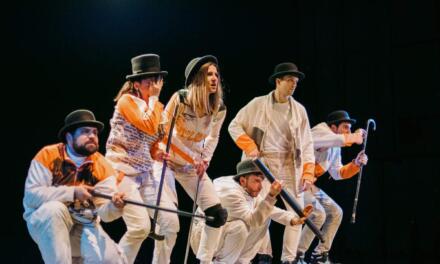