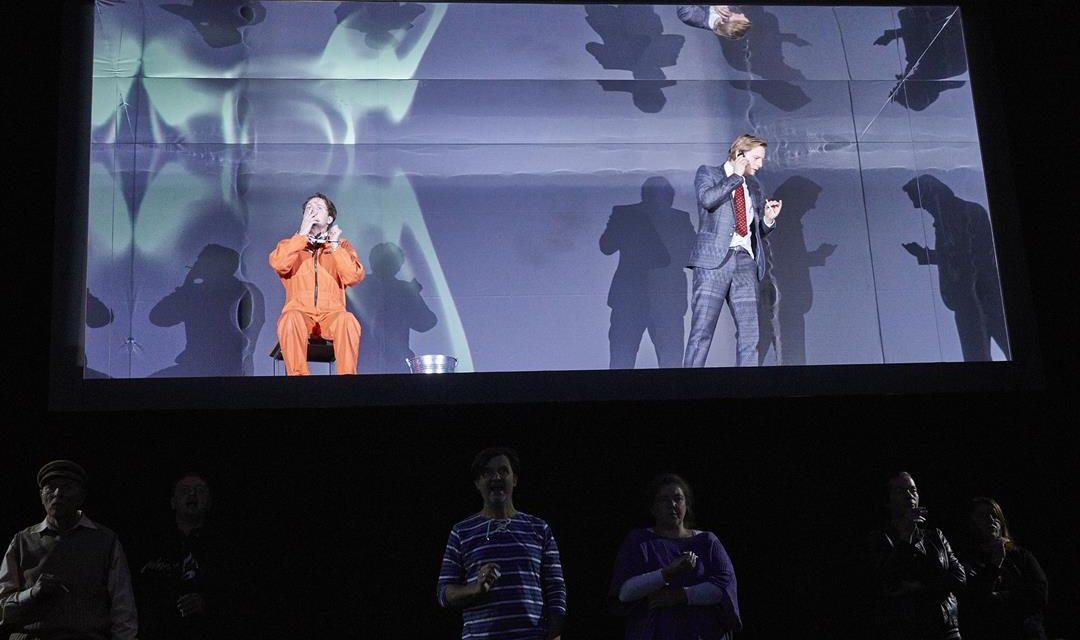 The German theatre has responded to the swing to the right in society. It has thereby proceeded to treat the subject in different ways aesthetically and thematically. Some plays have addressed directly the xenophobic Pergida movement and the right-wing populist Alternative for Germany (AfD). Others point up historical parallels and analyse right-wing patterns of thought worldwide.

“I’m no Nazi. I simply see Germany in danger,” calls a stage chorus into the audience in Volker Lösch’s production Graf Öderland / Wir sind das Volk (i.e. Count Öderland / We Are the People) at the Dresden Staatsschauspiel. The play is about a typical argument of the xenophobic Pergida movement, which since the end of 2014 marches every Monday evening through the Dresden city centre to demonstrate against a by the Pegida alleged “Islamization of the West.” On the stage the chorus consisting of amateur actors, which, as always in Lösch’s productions, complements the professional ensemble, takes up the Pergida slogans and thought patterns in order to show them up. The chorus texts, which intend to convey a comprehensive picture and so also include voices contrary to Pegida, cite statements by residents of Dresden. Lösch fades these into Max Frisch’s play Graf Öderland (Count Öderland) from 1951, which describes the violent rebellion of a public prosecutor. First, he shows understanding for the apparently unprovoked murder of a caretaker by a meticulous bank employee. Later he himself, emulating the legend of Graf Öderland, goes murderously marauding through the country with an axe, gathering many followers. 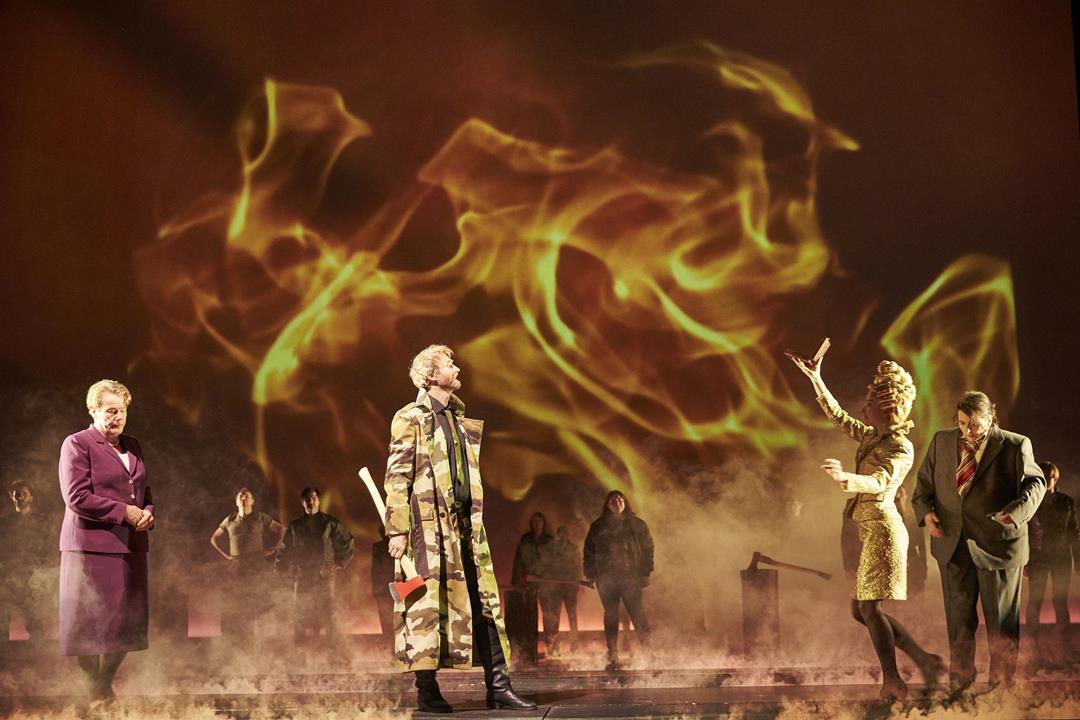 WHAT GOOD IS IT TO PRESENT STREET SLOGANS IN THE THEATRE?

Lösch’s play, which was premiered in November 2015, is one of the most media-effective attempts to deal with the widely diagnosed rightwards shift in society, but by no means the only one. Theatres all over Germany have been busy with the statements of Pegida adherents and AfD politicians and their sympathisers. However, according to one central point of criticism, this is usually done in a purely descriptive and documentary fashion. The phenomenon is presented on stage, often by satirical means, but too little analysed. Do we need such a theatrical reiteration of Pegida street slogans? asked rhetorically not only the Süddeutsche Zeitung with regard to Lösch’s Dresden production.

Falk Richter too has sometimes seen himself exposed to this criticism on account of his play Fear, staged by him at the Berlin Schaubühne. In this production, he likewise works with documentary material, with video images and quotations from Pegida demonstrators and AfD politicians. The content of the play is “transferred almost unfiltered from the news,” judged the theatre portal nachtkritik.de, and added: “No analysis whatever.”

IN THE BERLIN COURT OF APPEALS: THE AFD VERSUS THE THEATRE

Nevertheless, Fear stirred up more the average furore. The AfD politician Beatrix von Storch and the spokeswoman of the AfD-supported conservative family policy movement “Demo for All,” Hedwig von Beverfoerde, took the production to court, appealing to their personal rights. In addition to many other portraits, theirs too were shown in Richter’s play as the spawn of zombies, and thereby placed in the context of right-wing traditions of thought along with rightist politicians and terrorists. In December 2015 the Schaubühne won the case before the Berlin Court of Appeals. Thus, in spite of charges of lacking analysis, plays such as this one can be very relevant to the (city) public. Lösch’s Dresden production of Graf Öderland / Wir sind das Volk, for example, was perceived by many observers as an important event of self-understanding for the local counter public opposing Pegida.

Apart from these productions, there is another group of plays that diagnoses the swing to the right in a society which takes a comprehensive view of right-wing patterns of thought. Dirk Laucke’s play Furcht und Ekel – Das Privatleben glücklicher Leute (i.e. Fear and Disgust – The Private Life of Happy People), for example, which was premiered in November 2014 by Jan Gehler at the Stuttgart Schauspiel and invited to the Mülheimer Theatre Festival, alludes in its title to Bertolt Brecht’s scene collage Furcht und Elend des Dritten Reiches (Fear and Misery of the Third Reich) about everyday events in Nazi Germany. Cutting across various regions, sociotopes, backgrounds and age groups, Laucke lays bare right-wing figures of thought and patterns of language, and above all those of which the users are unaware. His minutely researched scene collage jumps from the more or less avowed neo-Nazi meeting in Halle to a teachers’ common room in Hunsrück, where the content of right-wing rock music is misunderstood, and a supposedly politically hyper-correct dramaturgy session in a fictional city theatre, in which on second glance we can recognise the residual jingoism of the actors.

Konstantin Küspert’s play Rechtes Denken (i.e. Right Thinking), which was premiered by the director Julia Wissert at the E.T.A. Hoffmann Theater in Bamberg in October 2015, also studies the phenomenon at different levels. On the one hand Küspert describes the structures of university fraternities and the rightist radicalization of a young man from a good middle-class home more or less at the family dinner table; on the other hand he integrates into his production a kind of philosophical superstructure by forging a bridge to Thomas Hobbes’s theory of the state in Leviathan (1651) and letting “concerned citizens” formulate their thoughts on the “strong state.”

Hans-Werner Kroesinger’s and Regine Dura’s documentary project Stolpersteine Staatstheater (i.e. City Theatre Stumbling Stones) at the Karlsruhe Staatstheater, which was invited as one of the ten most notable productions of the season to the 2016 Berlin Theatre Meeting, also takes a historical approach. It is based on the personnel files of the Karlsruhe Staatstheater from the Nazi period and documents with painstaking precision the discrediting, discrimination and dismissal of Jewish and Communist ensemble members after 1933 – and especially its purported justification. In the end, the play arrives in the present: the actors reflect not only on their own relation to the subject but also briefly perform a Pegida chorus: “If you don’t love Germany, get out of Germany.” Thus, Kroesinger and Dura, among many others, pose the perennial question about the role of the theatre, an entity that likes to see itself as a moral institution and an instance of critical questioning in society. 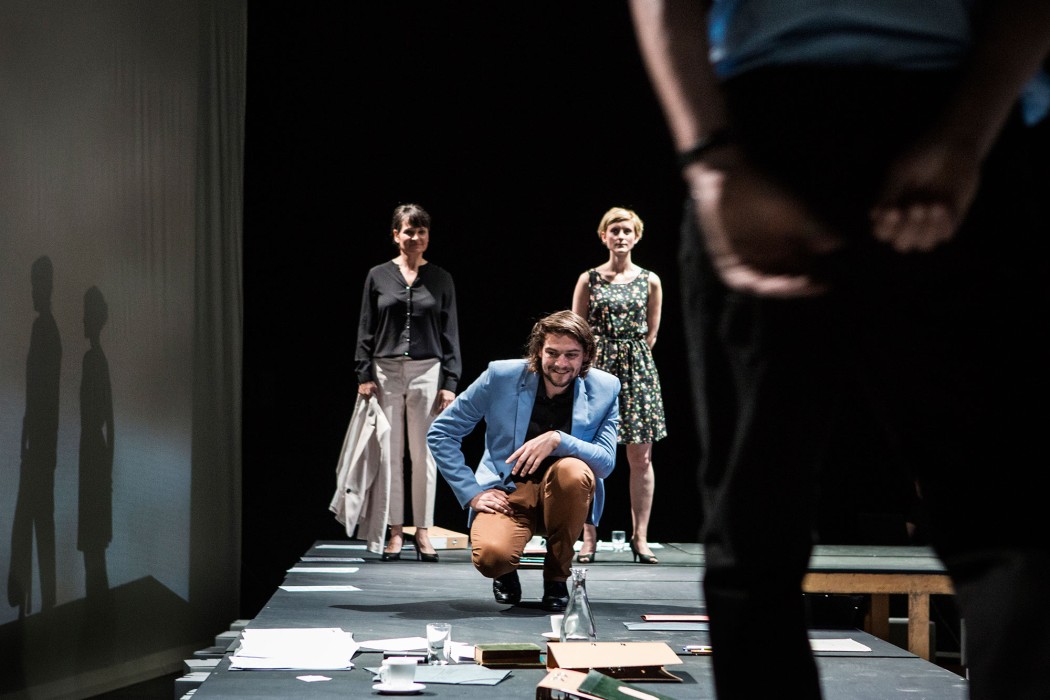 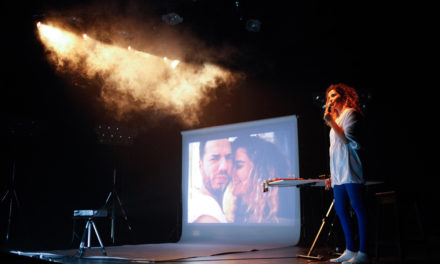