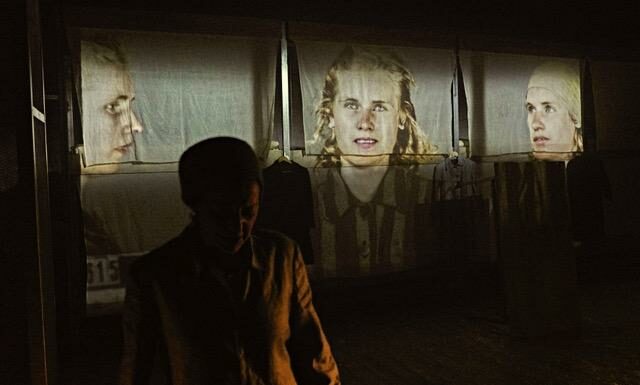 Carme Portacelli’s current season at the Español theatre has focused on stories about women by women. Portacelli’s new production of Mrs Dalloway opens at the Español’s main stage on March 28th, a valuable companion piece to Amaranta Osorio and Itziar Pascual’s Mi niña, niña mía (English title My Girl, My Little Girl) which is currently enjoying a month-long run theatre’s studio space, the Sala Margarita Xirgu. The play opens with awards already under its belt: winner of the VII Prize of Theatre Texts Jesús Domínguez from Huelva’s regional council in 2016, it has subsequently been published in Primer Acto, Spain’s leading theatre journal, and been translated into English, French, and German, with rehearsed readings at Avignon’s Artephile Theatre and Munich’s Villa Waldberta. The Madrid staging is assuredly directed by Natalia Menéndez, who proved such an impressive artistic director of Almagro’s Classical Theatre Festival, as a tale of survival and connectivity that draws parallels with the conditions of displacement and exile suffered by refugees today.

The play centers on two women—both unnamed. The elder (played by Goizalde Núñez) is a Jewish actress sent to Terezin concentration camp in the early 1940s as the piece opens. The younger (Ángela Cremonte) is an ethnologist involved in the study of fireflies. Two parallel timelines: The Second World War and the present. Both women emerge at the opening from the layers of light tulle fabric that are draped over the floor of the stage.  The actress is elevated on a table, the tulle wrapped around her as she moves in time with the rhythm of the moving train on which she travels, in cramped inhumane conditions with her sister and niece. The tulle both constrains her—pre-empting the conditions in which she will be held at Terezin, a camp north of Prague in what was then Czechoslovakia, now the Czech Republic—and accords her a luminosity that makes her appear as if she is flying. This is part of a number of associations made to see the two women as fireflies shining in the darkness around them. (At one point the ethnologist resembles one of the insects she studies, her ski-goggles adorned with tiny lights that shine brightly on the dark stage). The women’s monologues are accompanied by a lyrical soundtrack that evokes the tone of an elegy, a lament for a lost past—or a past that not yet been grappled with.

Inspired in part by the story of Czech actress Nava Schaan (1919-2001), better known as Vava Schoenova, a leading light of the Prague theatre scene who was deported to Terezin in 1942, this is very much a play about memory—how and what we remember and why. The actress is a doer, a woman who seeks to improve the conditions in the camp by working with children to make theatre, to offer an alternative vision of the possible—of Terezin’s 150,000 prisoners, 15,000 were children.  She rarely keeps still: cleaning, tidying, nurturing, aiding. Images of the camp’s iron gates, adorned with the words “arbeit macht free” are later juxtaposed projected footage of a Red Cross visit to Terezin, with the Nazis stage-managing an image of humane prison conditions to try and hide the realities of the Holocaust that the actress narrates. Projections on to the floor of the Spanish translation of “work makes you free” reinforce the irony of the message with an overwhelming and deadly sense of familiarity.

The ethnologist is a less attractive character: self-absorbed, timid, insecure and happier surrounded by insects than people. The play maps her journey to self-knowledge as the familial relationship between the two characters is gradually revealed. Ángela Cremonte plays her as reticent and inward-looking. Even when she embarks on some yoga-inflected poses, the impression is one of self-obsession. She is almost floating through her existence like the glorious green insects projected on the fabric screen. Goizalde Núñez moves from the darting, restless actress seeking to keep an eye on her fragile niece to the frailer senior citizen visited by the ethnologist in the play’s final scene. Her body shapeshifts, her feet appear less steady as the ravages of age come upon her. Something of her sprightly step remains as she dances across the room in a celebration of life that she repeats on numerous occasions.

Elisa Sanz’s set, with endless tulle that occults, camouflages and disguises, looks beautiful but perhaps over-aestheticizes a piece that is discomforting in its subject matter. The video projections by Alvaro Luna—of falling snow, fireflies shining in the darkness, and the cages in which the insects are held by the ethnologist are never less than sumptuous. The ethnologist’s less than confident skiing—her plunging towards the audience unsteadily as a metaphor for the journey she embarks on—is beautifully conjured. The table is enterprisingly deployed, as a second screen in which the ethnologist’s tale of tearing off the legs of a centipede as a child is partially illustrated, as a hiding place, as a lever to move the actresses along, as a cramped train compartment where the actress attempts to keep an eye on her teenage niece Aviva. At one moment, the ethnologist merges to become the new head of the centipede. It’s the image of a woman seeking wholeness, trying to discover parts of herself that she has never been able to understand. Luis Miguel Cobo’s busy soundscape is similarly impressive—wind, the moving train, soldiers on the march, activities in the bustling kitchen in Terezin.

My Girl, My Little Girl evidently has a revisionist angle—its focus on women’s stories is laudable and the production has at its core a women-centered creative team. At a time when the extreme right-wing—configured as a new party Vox which is expected to have a parliamentary presence following April’s general elections—is acquiring a prominence and worrying legitimacy in Spain, My Girl, My Little Girl also has a particular resonance in the Spanish context. This may be a play about two Europes—east and west meet when the ethnologist travels from Paris to Prague to meet the actress—but it is also, by association, a way of looking at Spain’s problematic past. Spain had its own concentration camps—director Natalia Menéndez’s grandfather was imprisoned in one—and over 100,000 disappeared persons are thought to lie in mass graves across the country. The projections of those held at Terezin give visibility to those who perished and survived, framing Vera’s story within the unknown tales of many others. The play’s concerns around a need to come to terms with the past resonate in a country where its former dictator still lies buried in the Valley of the Fallen and where attempts to engage with a more nuanced history of the Franco era have remained so contentious.

The sound of the train transporting the actress to Terezin also brings the play into the present: with echoes of la bestia, the freight train on which migrants from Central America come together to make the 20-day journey to the US border and the packed trains carrying Syrian refugees through Turkey to Western Europe. Watching the piece, I am repeatedly struck by Primo Levi’s comments on the unrepresentability of the Holocaust as articulated in Survival in Auschwitz: “our language lacks words to express this offense.”

Osorio and Pascual deploy the device of a letter—the reliable dramatic mechanism of both melodrama and Ibsen’s naturalism—to unlock the key to the ethnologist’s past and bring the two women together. And the encounter the ethnologist has with the actress, revealed to be her great-aunt, provides her with some degree of understanding of a past that can never be entirely knowable.  At the end, the ethnologist may hear from her great-aunt that her mother was a Holocaust survivor, born in Terezin and smuggled out of the camp by a cook in the camp—but she will never know who her grandfather was or what the atrocity may have been that rendered her grandmother pregnant. The actresses physically come together in the closing moments of the play, holding a bunch of luminous berries as if they were cuddling a newborn baby while they watch the fireflies on the screen behind them. This image of togetherness may, on one level, aspire to the redemptive but the Holocaust ultimately defies the possibility of eloquent order. It resists the clean look that the production opts for. That the play ends with silence is telling. Indeed, My Girl, My Little Girl reminds us of the need to provide responsible histories; it also acknowledges that histories can only ever be partial and incomplete.

My Girl, My Little Girl runs as the Teatro Español until April 7.