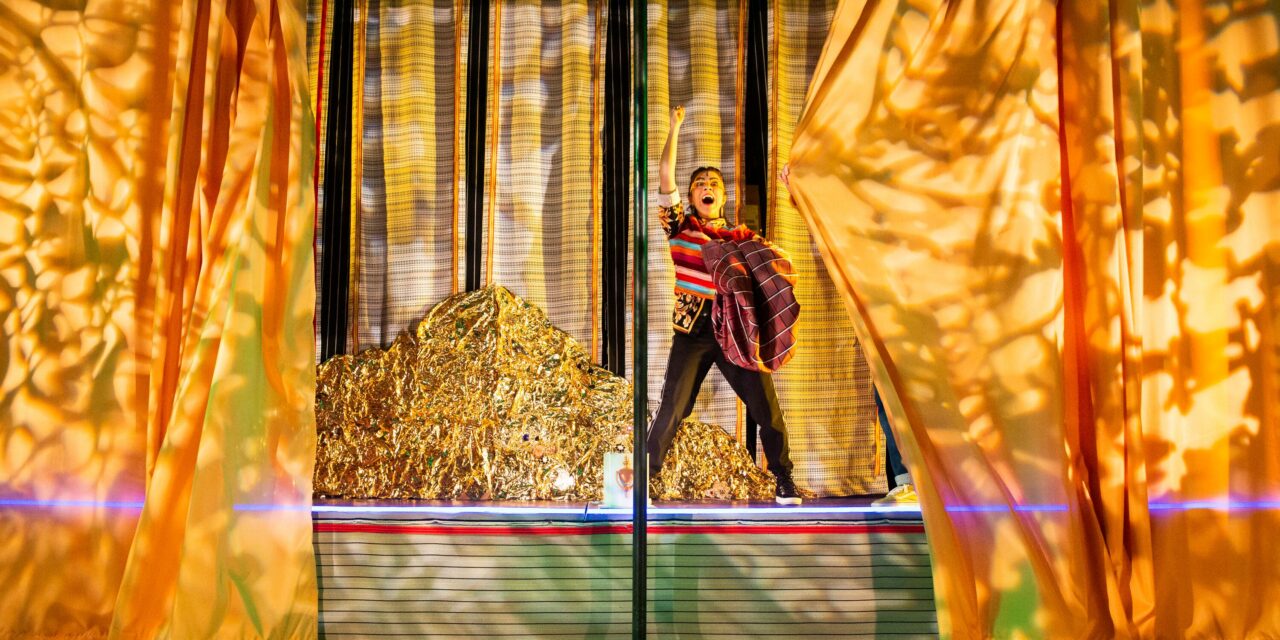 Caitlin Nasema Cassidy in "Marjana And The Forty Thieves." Photo by Gaia Squarci.

You know The Thousand And One Nights both better and worse than you realize. You may know it by a different name, like 1,001 Tales or Arabian Nights, and you may have read the latter to the tune of the opening song from Disney’s Aladdin. Aladdin is part of it, so is the phrase “Open Sesame!” and the captivatingly musical name Scheherazade. What you might not know is that it is as wildly erotic and shockingly violent as anything you’ve seen on Game Of Thrones or read in the Old Testament. But what is it, actually, and what is doing in a converted warehouse in the Sunset Park neighborhood of Brooklyn at Target Margin Theater?

The Thousand And One Nights is a medieval Arabic collection of stories, drawn from many sources. Like The Decameron and The Canterbury Tales, the stories are united under a compelling framing narrative. (Check out Pasolini’s Trilogy Of Life to see how all three can work as a set.) In The Thousand And One Nights, a cuckolded king, Shahryar, decides he will marry a new woman every night, take his pleasure, and have her executed in the morning. The brave Scheherazade, daughter of his vizier, cooks up a bold plan: on their wedding night, she will tell him a story so riveting, he will be obliged to keep her alive until he hears the conclusion. But, like any profitable franchise, she drags it out, one cliffhanger of a sequel after another. After approximately a thousand nightly installments, the king realizes he’s fallen in love with this cunning story-teller and, as the story goes, they live happily ever after. 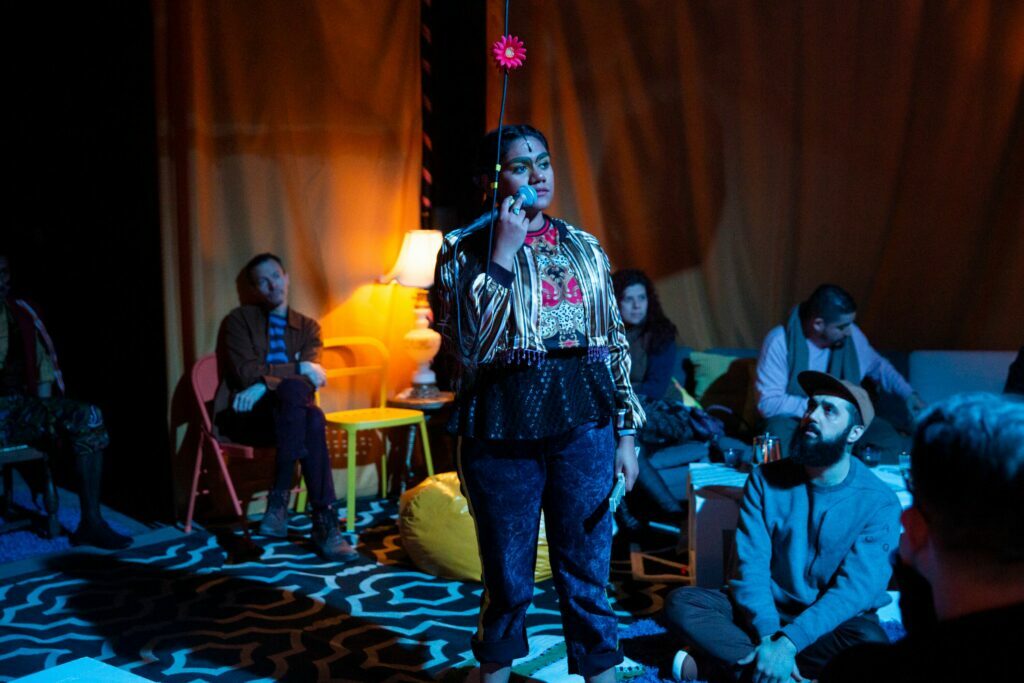 So even at its most basic level, it’s a story about stories. Stories are told within stories and about stories; Shahryar’s back-story unfolds along multiple story-lines, characters within Scheherazade’s stories tell stories, even when they hatch plans, they’re essentially telling stories in the future tense. And the story of how The Thousand And One Nights came to exist in the Arab literary tradition and beyond is a fascinating case-study of multi-authored texts and cross-cultural translation. In other words, it’s perfect source material for a director like David Herskovits

Marjana And The Forty Thieves was created and is performed collaboratively. There is no stable casting; each member of the ensemble, which is composed of Caitlin Nasema Cassidy, Sophie Laruelle, Anthony Vaughn Merchant, Anish Roy, and Isuri Wijesundara, performs as all the characters, including the narrator, who is not to be mistaken with Scheherazade. The entire cast was solid, but a couple of performers really stood out. Anish Roy is a genius of physicality; at one point he rode a horse across the stage, being somehow both the horse and its rider. And Isuri Wijesundara was simultaneously seductive and approachable, a real Scheherazade. 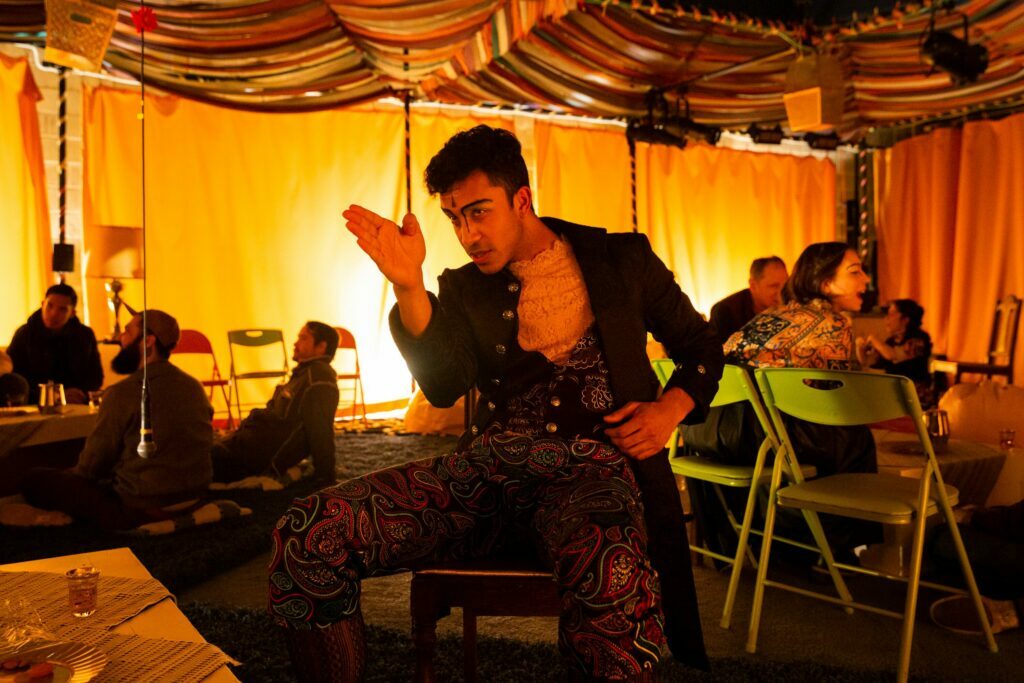 One thing that wasn’t completely successful was the weaving together of different dictions and dialects. Sometimes the actors used grandiloquent language with medieval and/or Arabian inflection, sometimes they “broke it down” and talked to us like it was 2019 in Brooklyn. The problem was only some of the performers moved between these registers without difficulty. For some members of the cast, the code-switching amounted to breaking character, which broke the spell.

The fact that the show is called Marjana And The Forty Thieves clues you into two important creative decisions. First, that they’re not trying to do the entire Thousand And One Nights in 90 minutes. Second, that, while taking the work seriously as an example of medieval literature, the company gives it a gentle feminist spin. The story of Marjana is better known as Ali Baba And The Forty Thieves, but Marjana is the real hero, and Ali Baba is kind of a dumb-ass. There’s also an incident of domestic violence in one story, which the show preserves for narrative’s sake, but allows the temporary narrator to comment on and condemn. 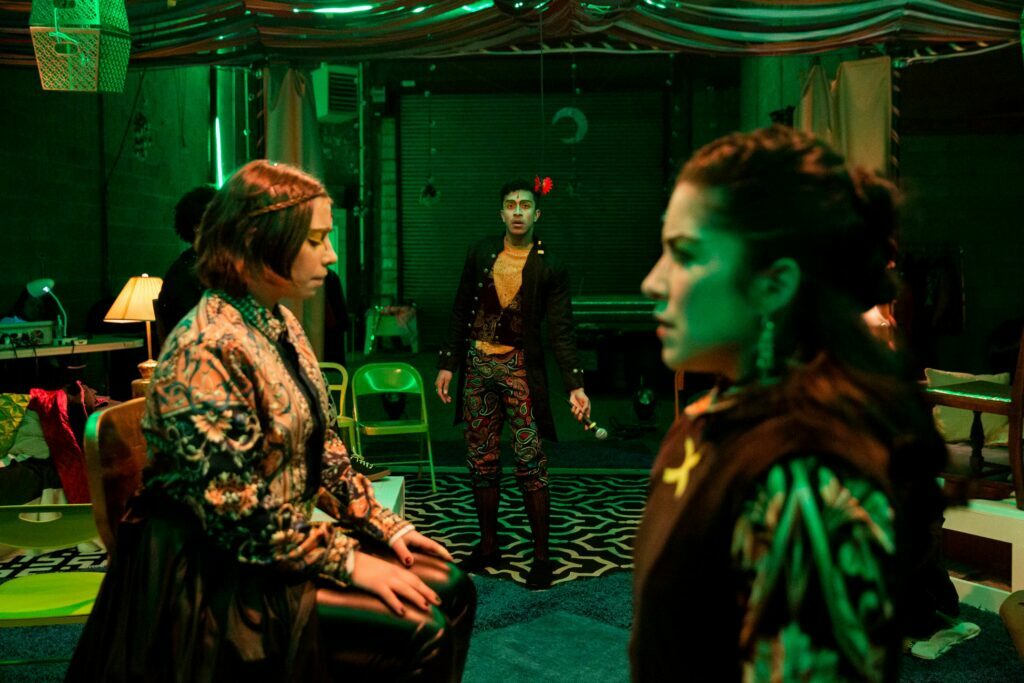 These gestures are no doubt the result of the collaborative and inclusive process through which the show was created. The company worked with multiple translations, criticism, and historical materials both to get at what The Thousand And One Nights has been, and what it could be. This deep knowledge is directed translated into the performance. The show is structured in three parts: the exposition in the beginning, the tale of Marjana at the end, and in the middle, the cast breaks the audience into groups, serves us a snack and tells us the backstory of the text. At least, my group got the backstory. Who knows what the other clusters were hearing over their mint tea and sesame candies–a thousand different stories could have been told. In this way, the company demystifies the material and demolishes the fourth wall.

Outside the theater, “the power of stories” has become a meaningless cliché. Out here in late capitalism, brands and abusers and scandalmonger are all desperately concerned with narrative. But inside the theater, and the library, stories are as potent as ever. I learned a lot from Marjana And The Forty Thieves, and I laughed a lot, and I cried at the end.