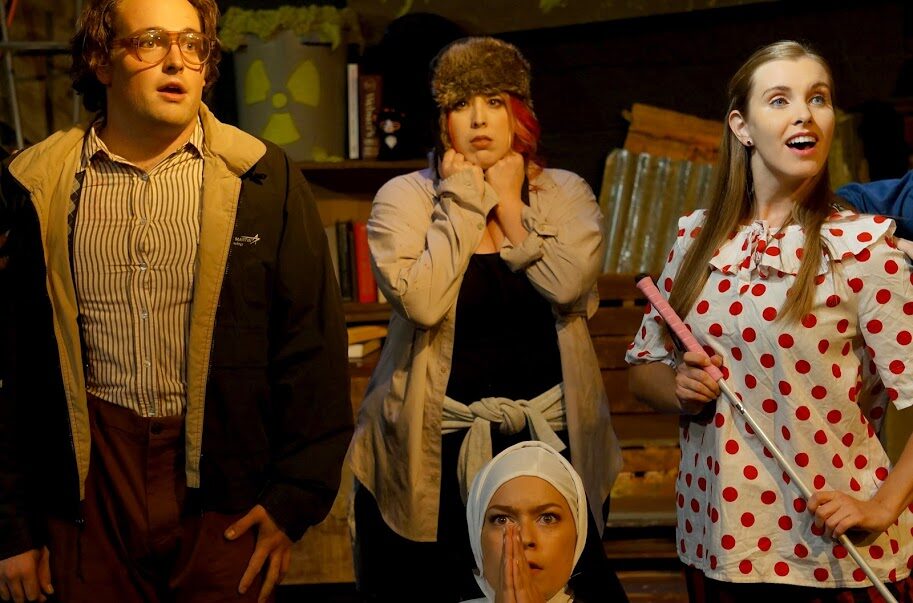 Founded in 2018, BoomStick Theater has focused its mission statement on providing a platform for lesser-known works from within the community and diverse storytelling in theatre, and their choice to produce The Toxic Avenger: The Musical at the Zephyr Theatre on Melrose seems to fit that description well.  Written by Joe De Pietro (Book & Lyrics) & David Bryan (Music & Lyrics) and based on Lloyd Kauffman’s Troma 1984 film The Toxic Avenger, the musical was first produced at George Street Playhouse in New Brunswick, NJ in 2008, then had its New York City premiere at New World Stages in 2009.  The show toured the United States, was produced in Toronto, Houston, Oahu, Coral Gables, Melbourne, and London.  There is a soundtrack available, and a film of the musical that was released in 2018, but if you want the live experience on an indie theatre budget, you have to check out this production. 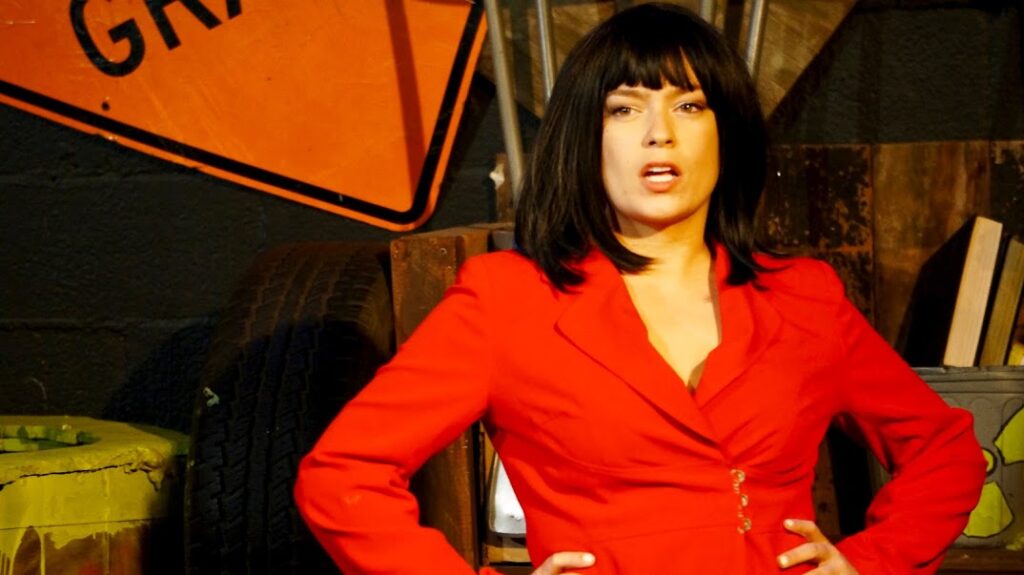 Rachel Rios as Mayor Babs Belgoody in The Toxic Avenger: The Musical. Photo by Joy Tenenberg.

If you are a fan of the original cult movie, you will find a significant number of things have been changed (there’s still some gore, just not as intense an amount and it has been morphed into something that is a lot more comical than might have originally been intended).  The setting is Tromaville – a town in New Jersey (of course) – where the citizens greet us with the first song “Who Will Save New Jersey?”.  The set designed by Lauren Sperling, Lachlan McKinney and Bryan Forrest makes wonderful use of the rectangular playing space and illustrates right away just how bad things have gotten.  Loic Suberville is Melvin Ferd the Third, a sweet young man who lives with his mother, wants to fight to clean up his state and is in love with the town’s blind librarian Sarah (played by Lennon Hobson, who is also the choreographer).  Sarah directs Melvin to the town records where he discovers their corrupt Mayor Babs Belgoody (played by Rachel Rios, who also tackles the roles of Ma Fred and a Nun) has been getting kickbacks while allowing companies to dump their toxic waste.  Mayor Babs tricks him into not revealing this news by making Melvin her Deputy then sends two Goons out to end him. 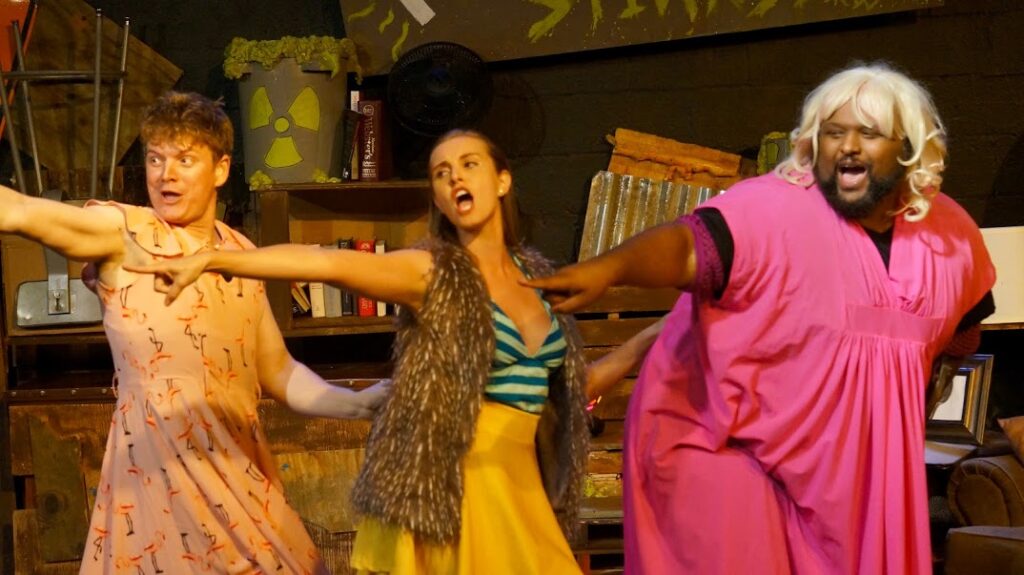 Those Goons are played by Huck Walton (who is listed in the program as ‘White Guy’) and Quinton Guyton (who is listed in the program as ‘Black Guy’) – both of which are apt if not simple descriptions for both take on many roles over the course of the play:  bullies, assassins, doctors, hippies, best girlfriends to Sarah (those are some of the funniest segments) they essentially do anything the play needs to move the story forward and they are delightful each time without stealing the show (at least not completely).  The Goons corner Melvin and dump him into a drum of toxic waste, then they spot Sarah walking home and try to assault her.  A roar stops the Goons in their tracks as Melvin climbs out of the drum, greatly changed.  The roar is an audio cue that is mostly (somewhat) effective but the makeup (by Katie Lynn Mapel, who is also Female Ensemble) and costume pieces (by Linda Muggeridge) transform Melvin into The Toxic Avenger who rips the Goons apart to save Sarah.  Sarah decides to call him Toxie, feeling he must be French, given the name.  Toxie won’t let Sarah touch his face, but she does feel his chest and his muscles prompt her to invite him to brunch the next day. 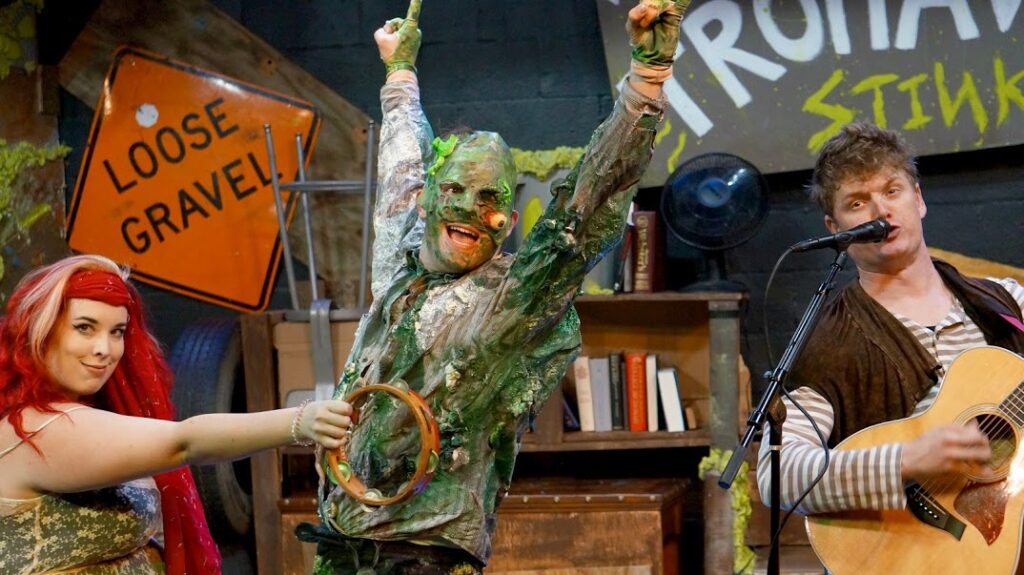 Toxie visits a doctor who tells him his only weakness is bleach.  The Mayor learns about Toxie when he starts defending the city from polluters and criminals.  She becomes determined to end him as Sarah grows more interested in her French boyfriend.  As things get tense with the Mayor, Toxie tries to leave, Sarah asks to touch his face and does so, leading her to break up with him, in horror (“is that an eye?”).  Toxie goes on a rampage, kills a senior citizen, while Ma Ferd finds Sarah crying and convinces her that all men are freaks.  In a face-off with the Mayor, Toxie gets hit with bleach and dies.  Ma Ferd rushes in with the one thing that can bring him back to life – water from the Hudson River.  Sarah is ready to forgive Toxie for all the death he has caused – especially the senior citizen, who was the head of a crime ring.  Toxie drinks the Hudson water (horrifying to imagine), is revived and vows to kill all polluters and end global warming.  A year later, Toxie is governor with his wife Sarah and mutant baby, Toxie, Jr. ready to face “A Brand New Day In New Jersey”. 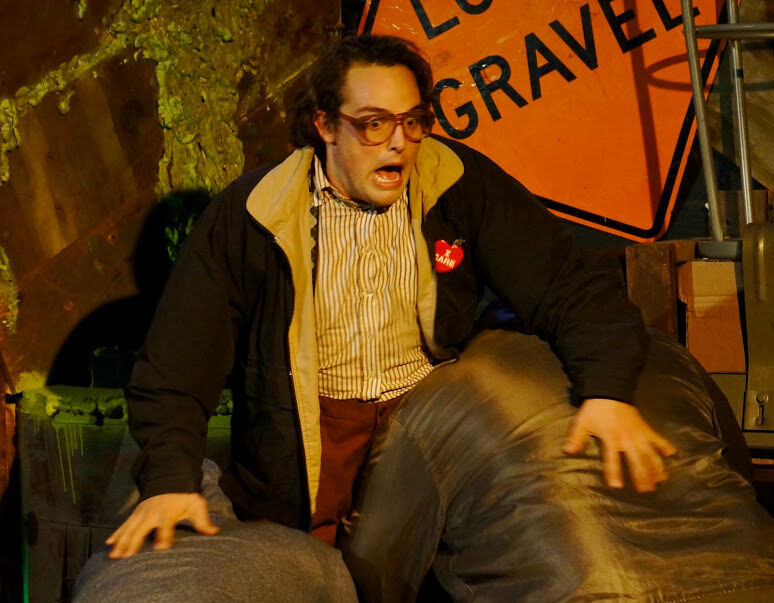 Loic Suberville as Melvin Ferd the Third being dumped into the toxic waste by Huck Walton and Quinton Guyton (obscured) in The Toxic Avenger: The Musical. Photo by Joy Tenenberg.

A couple of performances really stand out, the first being Suberville’s depictions of both Melville and Toxie.  He has a beautiful voice and the ability to use it to illustrate his emotional state quite well.  His performance of “You Tore My Heart Out” has the potential to bring tears to your eyes while “Kick Your Ass” shows off his rock vocals potential and he doesn’t shy away from the steam factor in “Hot Toxic Love”.  His physical work is specific and strong and he had the presence of mind to pick up his left eye when it fell off after his entrance (it’s live theatre, friends) and take it offstage with him so all around he not only delivers good work he is also present while doing so.  Rachel Rios has a belt that can blow the hair back on your head and a range that is put to the test as she juggles three characters (the Nun is only in the opening sequence, however).  Her “Evil is Hot” duet with Quinton Guyton (in the guise of a doctor who knows Toxie’s bleach secret) is a study in bravado and commitment and she has the charisma and presence to be anyone’s main villain.  Things get a little weird when we learn that Ma Ferd (Rios delivers strong physical work to differentiate Melvin’s mother from the mayor) is Mayor Babs’ childhood enemy and we watch Rios step in and out of a ‘closet’ to change clothes, keeping her character banter up (each time she entered the closet, we saw other actors back there – maybe intentional?  if so, it was a distracting choice) as Ma then Mayor stepped out in cycles until finally, Rios stepped out in an outfit straight out of vaudeville and Jekyll & Hyde – one half Ma, the other Mayor.  It looked more exhausting than funny.

Another solid performance was delivered by Musical Director Andrew Heath and his band of maybe eight musicians who he shared a tiny corner of the set with.  The musicians are not listed in the program so we cannot don our hats to them for the efforts they made to make that look easy but the music was performed well and it is such a delight to see a band that size.  One other unnamed female crew member appears at different moments to place and then strikes a fan, a disco light and a microphone with a stand.  Not being familiar with the musical myself, I’m not sure whether this was added by director Kevin Wetmore or something the script called for.  Overall, there were some rough edges, some questions regarding the use of space and direction and some moments where choices felt random but the choreography by Hobson is very fun to watch and guys – it’s a musical about a toxic mutant who wants to save the planet.  What could be more timely than that?

For more information about the company:  https://www.boomsticktheater.com/ 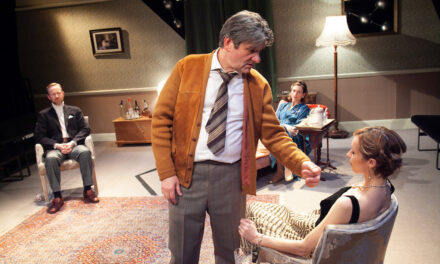 “Bodies” at The Southwark Playhouse