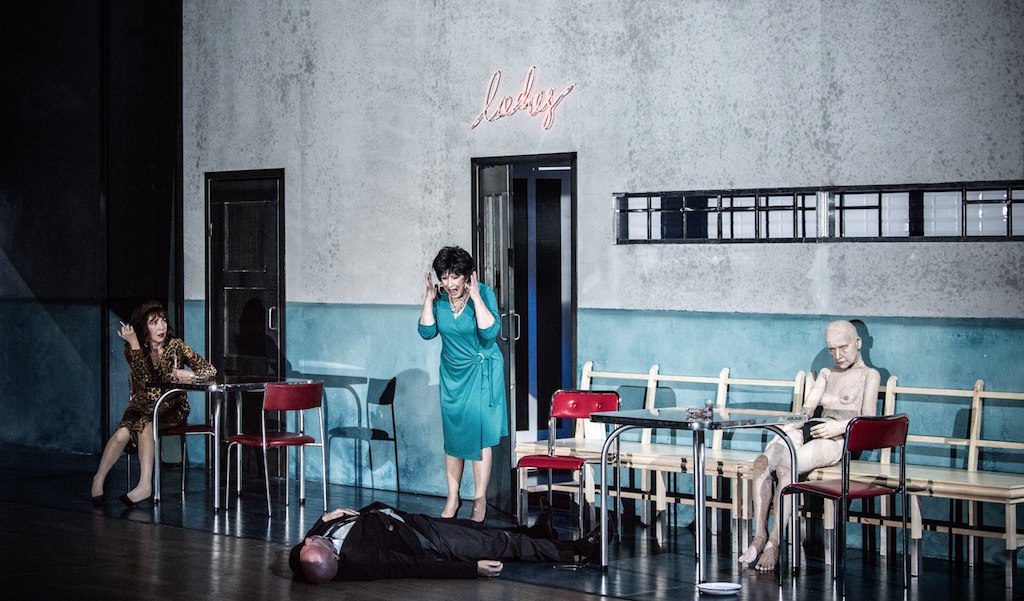 Wyjeżdżamy [We are Leaving], directed by Krzysztof Warlikowski.  Presented at Teatr Łaźnia Nowa—Duża Scena for the 2018 Boska Komedia Festival. Produced by Nowy Teatr.

We are Leaving, the new theatrical epic by renowned director, Krzysztof Warlikowski is packed to the brim with people who bustle and contemplate amongst bus stations, nightclubs, and bridge games. The longest play in the Boska Komedia festival at 3.5 hours, We are Leaving is loosely based on Israeli playwright Hanoch Levin’s (whose parents were Polish emigrants) The Suitcase Packers while also drawing from Tadeusz Kantor’s I Shall Never Return. There is not one overall plot; instead, Warlikowski presents several subplots for these drifting characters to bump into and interact with each other. Ever present however is the recognizable, slightly tacky, funeral parlor, in which each character in We are Leaving eventually finds rest.

The world is strange, open, and cheesy; the Łaźnia Nowa theater suits the play well with its near empty playing space surrounded by kitsch. The upstage funeral parol is overlooked by an ever-present Jesus; sometime this Jesus is a moving video. Contrasting on stage left are the bathrooms over which neon signs of “ladies” and “gents” hang. Almost every character visits these two locations several times. The funeral parlor to pay homage – which becomes more difficult when the funeral speaker himself dies – the bathrooms to fornicate. Małgorzata Szczęśniak designed this set, and also added to the world of the play with chintzy costumes. Leopard print, full red suits, tank tops. Szczęśniak won awards for best costumes and best set design for her work. 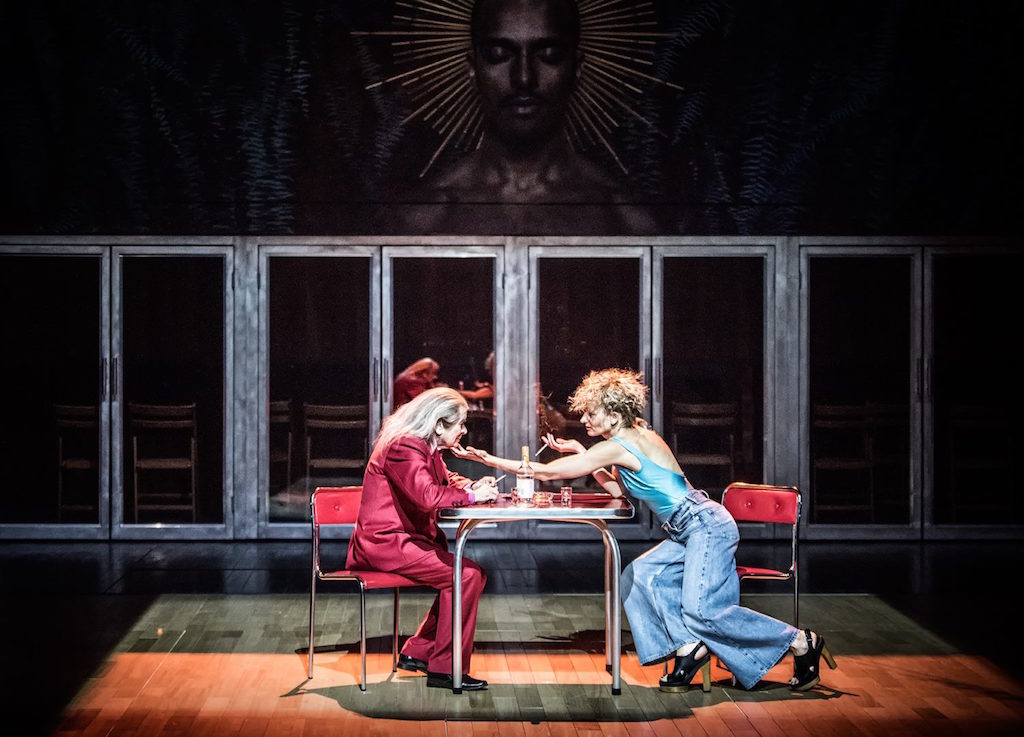 Rounding out the design was Paweł Mykietyn’s music (winner of best sound design) and Felice Ross’s lights. Both the soft jazz that at times drifted into elevator music and the fluorescent-like lights shaped the tired purgatory in which these characters live and suck air. The play itself takes place in Israel, but the world is also undeniably colored by a Polish perspective. Personally, I found the world to be very American; Len Jenkin would be very much at home in this play.

Speaking of which, a standout member of these eclectic group of characters was Angela the American played by Magdalena Cielecka in an entirely different role from when I last saw her in TR Warszawa’s 2010 4.48 Psychosis. In We are Leaving Cielecka speaks entirely in English (albeit with a THICK Slavic accent) wonderfully obnoxiously documenting her visit to Israel/Poland, selfie stick ever-present. One of the few characters to succeed in traveling, though we discover later that she is actually returning home to Poland/Israel to seek out her Jewish roots. 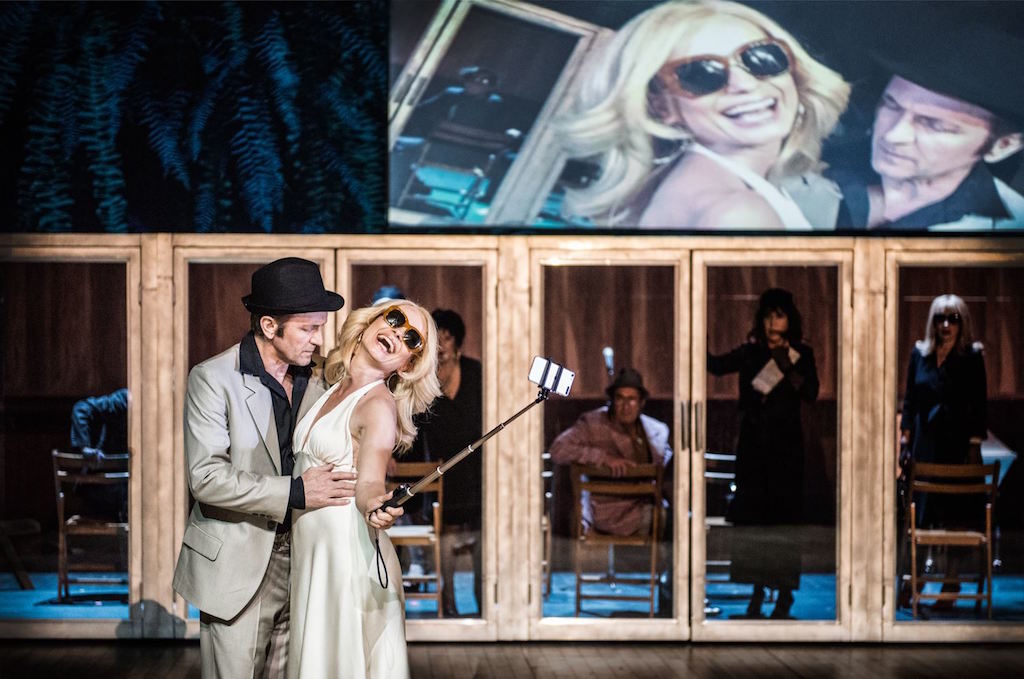 Each character Warlikowski introduces us to eventually dies and receives a funeral. This near constant parade of death+funeral quickly becomes funny, particularly as the living characters struggle to remember whose funeral they are attending as the deaths become more farcical and more frequent. However, as Warlikowski allows the audience to spend time with these characters, you begin to know them, and the humor is absolutely colored with sadness and empathy.

There is a sense of inescapability. One character wishes to travel to Switzerland but spends all of his money on a prostitute. Grandma (played by best-supporting actress, Jadwiga Jankowska-Cieślak) keeps on escaping her clinic but is always sent back. Her grandson is able to run away from his abusive father, lose his stammer, and embrace his sexuality, but he too eventually returns, alone and stuttering.

As such, the title We Are Leaving becomes ironic, as truly the only way these characters CAN leave is through inevitable death.

The play is ripe for interpretation. A colleague of mine found a resonance with the Holocaust and saw this play as a means for indirectly addressing the tragedy of the countless unnecessary deaths. The program notes compare the insertion of coffins into the walls of the funeral parlor to Charon’s ferry across the river Styx. Another reviewer of this piece sees Angela as a spin on the Angel from Angels in America (Warlikowski himself directed a production of Angels in 2007).

Near the end, the one character who is able to escape recounts to the audience her various travels in Europe. Her story is rapid-fire and non-stop, and it turns out she is unable to fully remember her adventure in this eager anti-climax. After all, who can remember which European church was in which European town? In the background, all of the characters return in a line, dancing a simple two-step. The remaining living characters slowly ‘die’ as their names are presented as a projection above the funeral parlor with birth and eventual death dates. 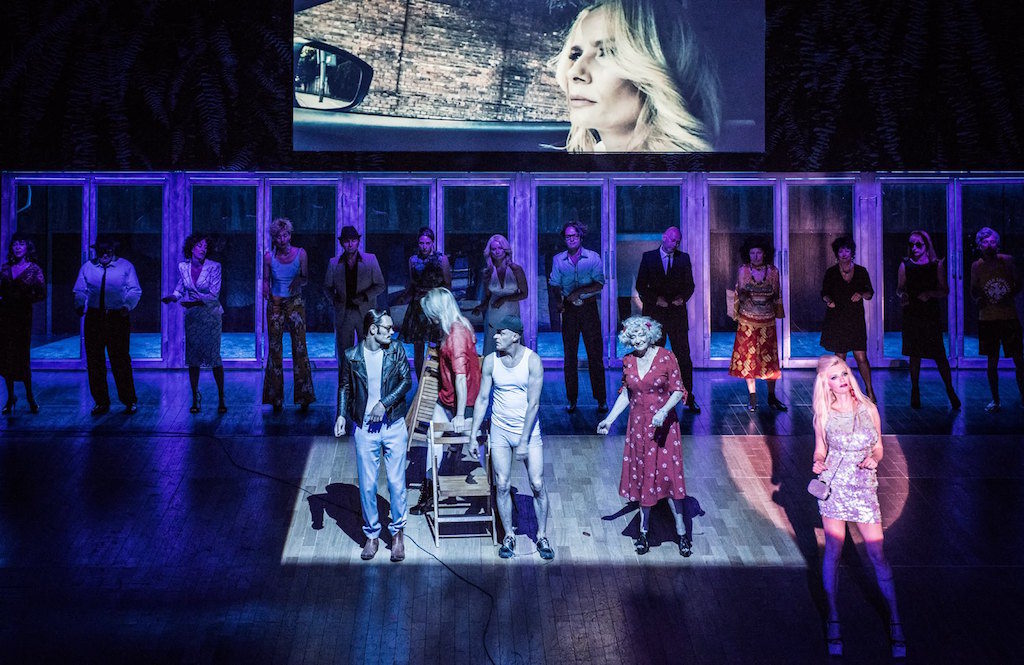 The program to We Are Leaving describes the absence of promised land. Even if we are able to emigrate, there is no way that we can emigrate from ourselves. However, Warlikowski does not present a wholly nihilistic interpretation of the impossibility of true change or movement. Rather, his play embraces and celebrates the simple pleasures. Listening to a soccer game, dancing at a nightclub, singing, making light conversation with friends. 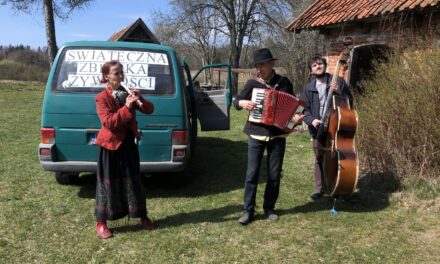