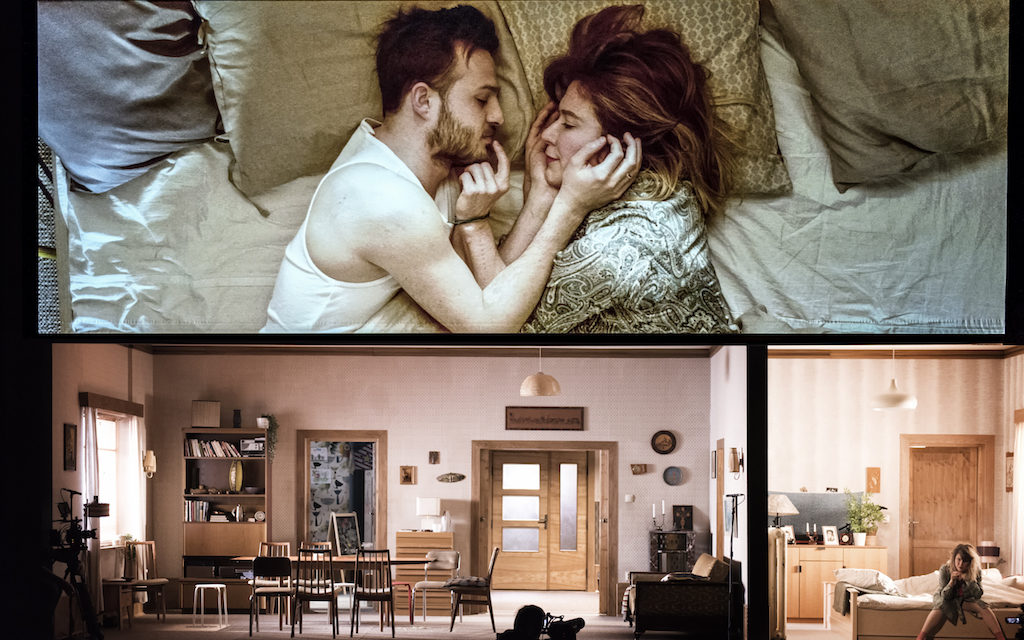 Under The Influence, directed by Maja Kleczewska is, simply put, a beautiful piece of theatre. It tells the story of Mabel (played by the stunning Sandra Korzeniak who won Best Actress for the festival), her middle-class family home life, and her mental struggle to cope.

Based on the award-winning American film, A Woman Under the Influence, directed by John Cassavetes, this play continuously surprised me throughout its 100-minute runtime.

As the curtain slowly rises in the ICE Kraków auditorium, we see a meticulously arranged contemporary apartment, designed by Marcel Sławiński and Katarzyna Sobańska (known for her work in Oscar-winning Ida). The visual design, notably the lighting of Kacper Fertacz and the costumes of Konrad Parol also help to create a soft brown world enhancing the coziness of Mabel’s home life, later contrasting with its insidious undercurrent.

However, the curtain continues to rise and above the set is a congruently sized high definition film of the apartment, captured live by camera operators Kamil Małecki and Andrzej Sepioł, as well as a third stationary camera placed far downstage center. Throughout the play, Małecki and Sepioł infiltrate the action, capturing close-ups of the actors and scenes off stage: the kitchen and bathroom are only visible via film. A climax of the play, in which Mabel is forcibly removed from her house, was particularly effective as you could only see what was happening on the screen, adding to the powerlessness infecting the play. 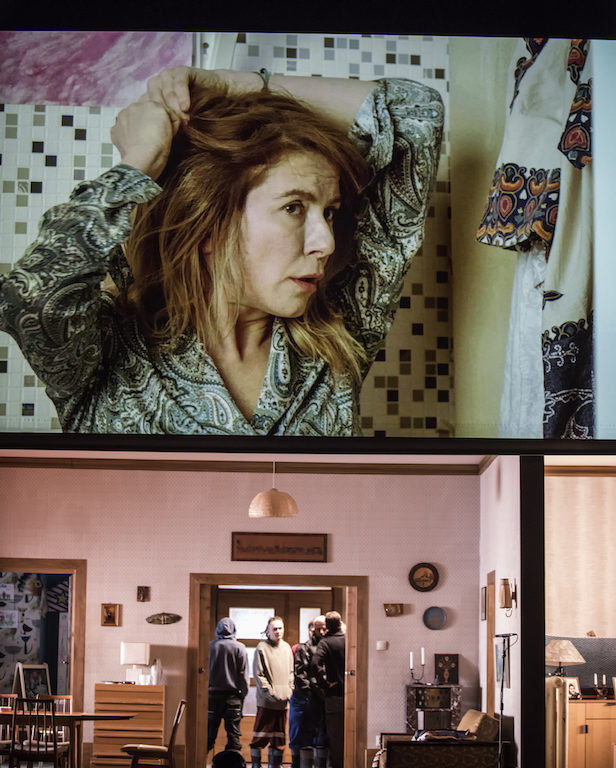 Magically, just a few minutes into watching the play, I realized I was no longer watching a live film. Mabel on stage crosses in one direction, Mabel on film stays put. I did not know for how long I was watching a pre-recorded track. Now that I think about it, I’m not even quite sure the film was ever live (though I’m pretty sure it was), which wonderfully adds to embodying Mabel’s disassociation. Theatrical moments like these were embedded throughout the piece, in which it was never truly evident if the film was live or not. One effective use of this technique occurred after an argument with Mabel and her steadfast but emotionally obtuse husband, played by Piotr Bułka. The actors separated with frigidity on stage but lovingly embraced on film.

Additionally, although the set, acting, and world were hyper-realistic, Maja Kleczewska continuously snuck in moments of oddity and surprise that built and escalated. Moving chairs to make room for guests turned into Mabel throwing chairs against a wall to make space. The guests arrive for dinner and eventually one breaks out with an impressive Nessun Dorma. A film of a loving father and his young children at the beach ending with the children and father sharing a beer and beating a dead bird with a stick. Shortly after Mabel is removed by the doctors, the Hans Zimmer like tones created by music designer Cezary Duchnowski increase in volume as the stage suddenly is filled with blacklight and a giant bunny appears in the master bedroom before walking away and never returning.

Time moves strangely and inconsistently in this world. Sometimes at a real pace, sometimes in slow motion, sometimes days pass without warning.

These moments never became boring or trite; I was always eagerly awaiting to see how I would be surprised next (the bunny moment caused me to shout out loud). However, the joy I had with each moment also effectively opened a new window in Mabel’s world of smooth realistic hallucinations. You felt for Mabel and her semi-awareness that things were not quite right. 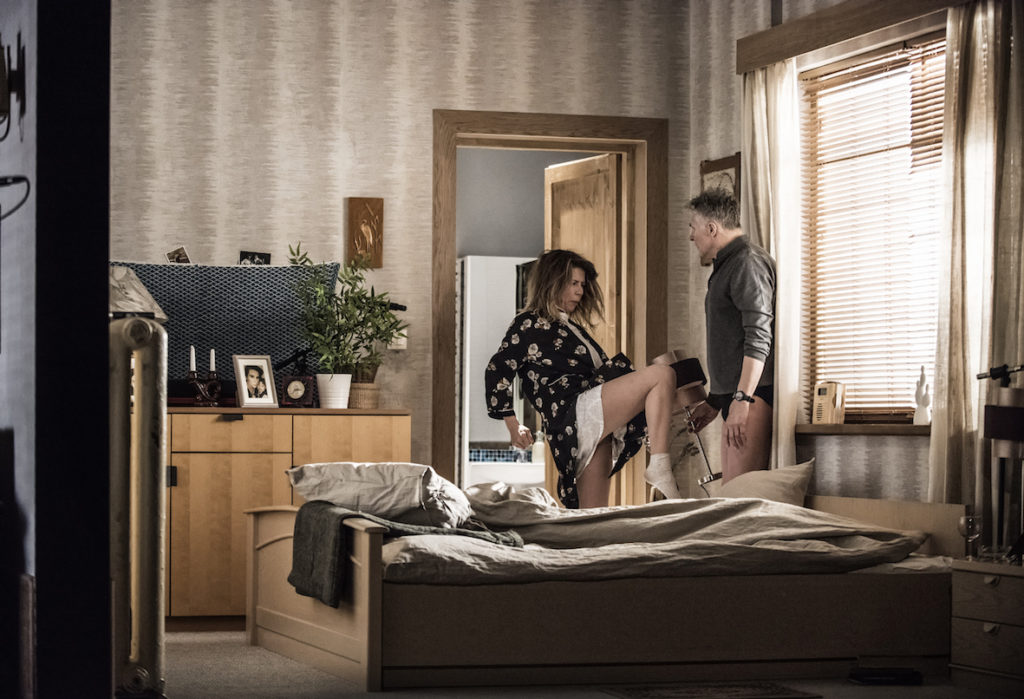 Under the Influence features an incredibly large cast – over 30 actors – yet Sandra Korzeniak as Mabel stands alone. Fully in command of her role throughout the piece, Korzeniak effectively embodies the despair, love, fear, confusion, and pain of Mabel as well as her experience as a passive figure struggling to maintain control. Initially, I believed the title to be a reference to drugs or a mental state. Indeed, we see Mabel self medicate with copious amounts of alcohol in the first half of the play. Additionally, while it is thankfully kept as ambiguous as the rest of the play, it is implied that Mabel has a borderline personality disorder. However, I now believe the title refers to Mabel’s inability to own her life and escape the pressure of her husband, crowds, and the day-to-day. Interestingly the Polish translation of the title is Pod presją, which more closely translates back to “Under Pressure.”

Sandra Korzeniak’s standout moment is a truly frightening scene in which she is forcibly removed from her apartment by two male doctors. The camera is locked on Korzeniak as we see her desperately fail to fight and fail to convince her husband to let her stay. Nearly as powerful is Korzeniak’s return after 6 months in hospital; now a quiet shell of her former self. Throughout the entire play, Korzeniak makes particularly effective use of her voice, at times adopting an oddly scratchy high voice when conversing with others. 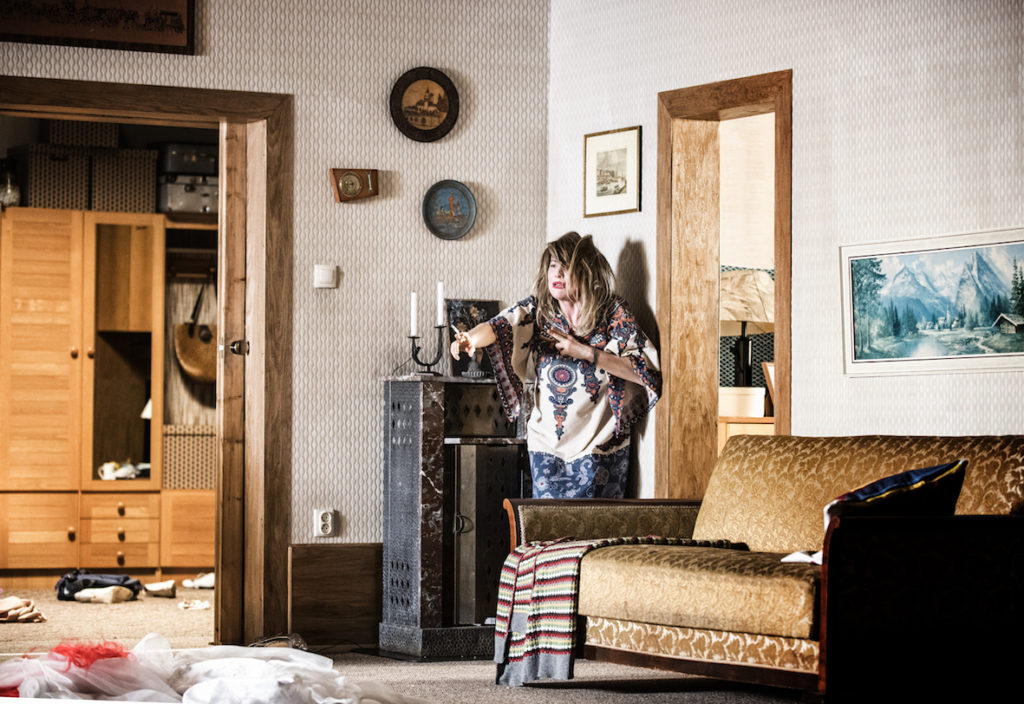 At the very end of the play, Mabel breaks the already loose 4th wall by stepping out of her rectangular prism apartment, moving downstage, and facing the film her audience has been watching for the past 100 minutes. Is she further dissociating? Is she painfully transcending the bullshit of the banal? Is she escaping?

Under the Influence is a success. The love and care Maja Kleczewska, Sandra Korzeniak, and the rest of the team brought is evident and it is absolutely deserving of the Best Play Award it achieved for the Boska Komedia festival. 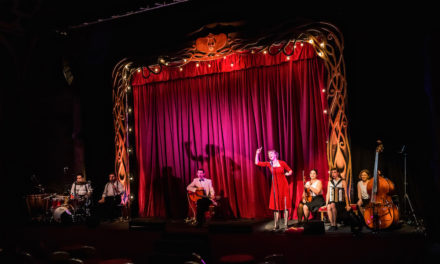