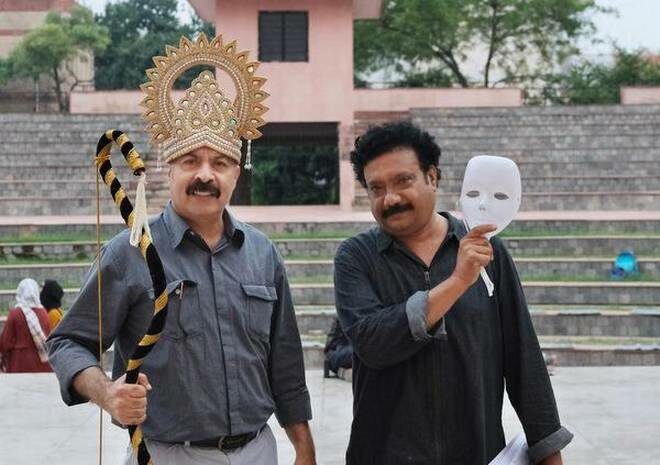 Ahead of the première of Dastaan-e-Ram, writer Danish Iqbal discusses the joys and challenges of re-imagining the epic as an Urdu play.

(India is proud of the existence of Ram. Spiritual people consider him prelate of India).

To some, Ramayana in Urdu may sound like an oxymoron, but those who understand the syncretic tradition of the country would know that over the years, the epic and its episodes have inspired Urdu poets and writers alike. Right from Munshi Jagannath Lal Khushtar’s translation that was published in 1860, we have a rich collection of translations of Ramayana and its episodes in Urdu. Now, noted playwright Danish Iqbal has come up with a stage play Dastaan-e-Ram that uses dastangoi, shadow puppetry, and physical theatre to tell the epic in a lyrical fashion. 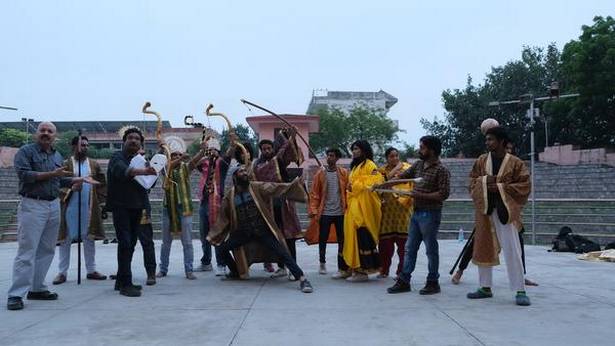 Language No Bar: The cast and crew of Daastan-e-Ram during a rehearsal session.

Of late, Iqbal has emerged as one of the creative forces who are using the medieval art of storytelling to tell the mythical stories of India. He already has Dastaan-e-Mahabharat up his sleeve while Mahmood Farooqui’s Dastaan-e-Karn is equally evocative.

“I don’t think many people relate to tales of aiyyars (shifters) anymore. It’s shape time to tell stories of our culture, our heroes,” says Iqbal. He feels Urdu poetry not only provides a novelty but also brings out subtle nuances of these stories.

Iqbal has drawn from the works of Betab Barelvi, Maharaj Bahadur Barq, Brij Narayan Chakbast, and Saghar Nizami to create a long poem, a “mahakavya”, as he describes it.

“There is plenty of archival material available on Ramayana in Urdu. Most of it is almost 100 years old and is classic in its form and content. Here, I have used only a few dialogues and have relied on poetry to carry the narrative forward,” explains Iqbal, whose Dastaan-e-Gandhi is also creating waves.

Iqbal says the dastaan starts from the Shravan Kumar episode wherein Dashrath inadvertently kills him thereby earning the wrath of his parents.

“In Ramlilas, we generally avoid the ironies that define Ramayana but as a dramatist, I thrive on ironies and the epic is full of them,” he avers.

The episodes unravel in a cavern in the medieval period where storytellers get together and one of them tells the tale of Imam-e-Hind, a title given to Lord Ram by poet Allama Iqbal. “It brings in the element of dastangoi, and as the story unravels, we use Kathak, Bharatanatyam, Chhau and martial arts to add heft to the form.”

Another novel element, adds Iqbal, is the use of life-size shadow puppets from Karnataka from togalu gomebeyaata tradition. “We have used the works of master puppeteer Gundu Raju to create the war scenes on stage.”

Iqbal has enough material to put across the personalities of different characters to ensure nobody comes across as cardboard. Ravan often meets this fate, but Iqbal is quick to cite a conversation between Ravan and his wife Mandodari taken from Betab Barelvi’s poetry to put his point across.

When Mandodari requests her husband to make peace with Ram, Ravan brings out the injustice meted out to his sister.

Iqbal also promises to bring out the humane and vulnerable side of Ram before his heroic qualities overwhelm the viewers. He recites a few evocative couplets of Chakbast that poignantly capture the mother-son bond between Ram and Kaushalya after Dashrath’s demise. Kaushalya says:

Iqbal underlines the poetry fits the characters because both work on a multiplicity of emotions. “Here Ram is not behaving like a god and is talking about surrendering to His will.”

It is Chakbast at his best, beautifully weaving Islamic symbolism in a verse meant to describe the mental state of a Hindu icon in the midst of an emotional crisis.

But what is it that makes people turn to listen to their myths in Urdu? “Perhaps, it is the aesthetics and elegance of the language. For some, the dense poetry brings alive the complex thoughts that are ingrained in these texts, something that the simplistic Ramlilas are not being able to achieve these days,” analyses Iqbal.

Iqbal agrees that there are many who don’t get the meaning of words. “They assume the context by the expression,” he laughs. That’s why, he adds, writing such dastaans is difficult. “The first line is used for identification and the next should have the ‘wow’ factor.”

For Iqbal, it is an endeavor aimed at creating a more inclusive space, not just at the literary but also at a cultural level. He said that during rehearsals he met an old man who came to Delhi as a refugee after Partition. “Moved by what he saw, he said it reminded him of what his father used to perform in Attock before Partition,” says Iqbal. He promises to turn the play into dastangoi format as well. “Apart from the charm of the charm of the form, it will allow acknowledgment of individual poets during the performance which is not possible in a play.”

He informs a leading publisher has offered to publish the play in Hindi and Urdu.

Iqbal admits that at times he is accused of majority appeasement, but he feels it is important to reach out to the “other” in times we live in. “It is a two-way process. When Chakbast was writing about Kaushlaya-Ram conversation after Dashrath’s death with Islamic jargons that reminded of marsiya, was he reaching out to Muslim readership,” he wonders. “When Akbar circulated a coin with images of Ram and Sita embossed on it, which we have used on the poster, was he looking to win an election,” he asks.

Iqbal says when he informed Rakesh Vaid, a leading exporter with a taste for Urdu poetry that he was writing Dastaan-e-Mahabharat, he suggested that Iqbal should try something on Prophet Mohammad’s teachings as well. “I said he should give it a try. I guess that is the way forward.”

While growing up in Aligarh, director Mustajab Malik would often watch Ramleela with his father who taught at the Aligarh Muslim University. “I would always tell myself that one day when I will direct Ramleela, I would use Amir Khusrau’s bidai song after Sita’s swyamvar. Here I got an opportunity, so we are using ‘Kahe Biyahi Bise’. We have recorded it in two voices but I am not happy,” says Malik, who already has invitations from Ayodhya and Dubai to stage the play.

A big-budget production, Malik describes it as an amazing combination of dastaangoi and physical theatre. “It became possible only because Danish bhai could bring different elements together. My aim is to take it to more and more Muslim audiences and present Ram as a cultural icon. We have used marsiya and soz (elegiac songs of lament) as well as Wajid Ali Shah’s thumri to portray the pathos and joys that dot the narrative,” gushes Malik, who has brought shadow puppetry and cutting-edge projection to draw the millennials.

This article originally appeared in TheHindu on October 10, 2019, and has been reposted with permission.