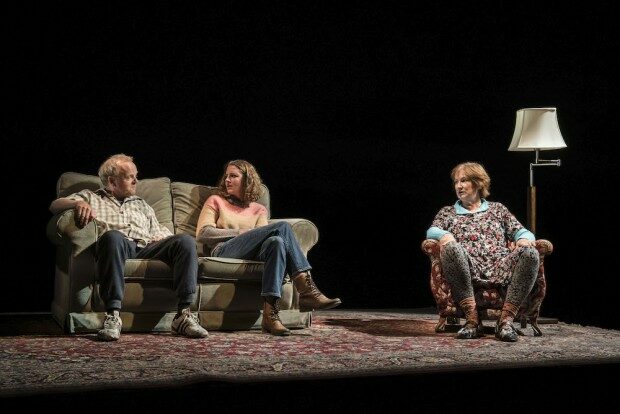 At the age of 81, Caryl Churchill, Britain’s greatest living playwright, is still going strong. Her latest is a typically imaginative quartet of short plays. Each of them is vividly distinct, being linguistically agile, theatrically pleasurable and emotionally dark, yet all are also united by the common theme of folk tales and strongly archetypal stories. As one of the Royal Court’s most characteristic writers, it is fitting that her newest work enjoys a superbly high-definition production, complete with actors of the caliber of Toby Jones, Deborah Findlay and Tom Mothersdale. It’s as if Angela Carter has decided to have a bubbling champagne party with a little pack of rebel girls and naughty boys. You can almost sniff the glee.

The first playlet, Glass, is about a little girl, who is “made of glass”, so she’s metaphorically transparent and fragile, especially when she is bullied in a story that also features the painful issue of abuse. As she exists among household items such as a talking clock, a happy red plastic dog and a vase, the atmosphere of a toy story contrasts with the disturbing sense that everyday violence often goes unseen. This short piece has a bright comic flavour, although the colourful nature of the toys and the stereotypical humans is left largely to our imagination. As the playtext says, “There should be no attempt to make the glass girl look as if she is made of glass”. Whatever is taking place is happening inside our heads.

In Kill, Churchill reminds us that the roots of domestic violence go back to ancient myths, as her Gods retell the stories of the Trojan War and the House of Atreus in a breathless monologue which is punctuated by the interjections of the People, played by a single small boy (Caelan Edie on press night). In fact, the plural “Gods” is deliberately playful since they are also all played by one actor (Mothersdale) as a cheerful almighty, who smokes and underlines the fictionality of all myths by opening saying that Gods don’t exist and are random in their reactions. The deeper point is that if the barbarity of ancient Greek revenge killings and brutal deities are at the heart of Western civilization then it’s hardly surprising that today’s murderous psychos can “be so charming”.

Which is the theme of Bluebeard’s Friends, in which the legendary serial killer of some nine wives is treated as a suburban Ripper who was never suspected by his neighbours and whose collection of bloodstained dresses, all that remain of his victims, can be monetized for profit. As can his tourist-ready castle. His friends meet to eat and drink together, while remembering their complicity in his killings. The result is oddly mundane and nightmarish, both gloriously gothic and slightly sickening. As these ordinary individuals — convincingly played by Jones, Findlay, Sarah Niles and Sule Rimi — chat about the violence that has been meted out to Bluebeard himself, in revenge for his murders, a strain of black comedy pulses though their exchanges. They even comment on how this whole story is “quite noir”.

The most developed piece is the hour-long Imp, in which Jimmy and Dot, a pair of aging cousins, make friends with the younger Niamh and Rob, whose growing affection for each other takes place against a series of references to Oedipus, Hamlet, King Lear and Romeo and Juliet. As the chair-bound Dot contemplates releasing her Genie-like imp from its old wine bottle, other stories of savagery circle this domestic scene. While Jimmy is a manic jogger, keeping his own personal dark stuff at bay by increasing doses of physical exercise, Dot talks to and comments on Niamh and Rob, occasionally losing control and giving vent to the boiling anger within. It comes as no surprise that she has herself been involved in homicidal rage.

It has to be said that it’s hard to convey the subtlety of Churchill’s conception of theatre in a shortish review. For this is an evening of memorable little moments, like twinges of unease rather than great bellowing hurts. In Glass, the rejection of naturalism means that the feelings of abuse are just whispers which are just audible behind the comedy of grown actors being household objects. In Kill, the overt statements by the Gods that they didn’t like some kinds of human behaviour, while then punishing it in a seeming random way says more about existential angst than the simple surface of the monologue. In this production, the little boy who represents the People draws and scribbles in a book, while the deity sits on a ridiculous-looking cloud, both being a reminder about the imaginative contract with the audience common to most avant-garde theatre.

In Bluebeard’s Friends, the lightness, banality even, of some of the exchanges suggests that we not only ignore the realities of domestic violence, but — more disturbingly — we do so willingly and maybe even maliciously. As we smile at the actors, we might like to question our own complacent complicity in various acts of atrocity. Or we might not. Either way, Churchill makes her point. In Imp, Jimmy’s depression and the older couple’s willingness to pass judgement on Roy and Niamh once again implies that there is always so much more going on in every domestic situation than first meets the eye. You don’t have to be a psychoanalyst to agree.

These four pieces are beautifully directed by James Macdonald, whose cast — especially Jones, Findlay, Mothersdale and Louisa Harland — all give precise performances, making this an evening in which imaginative experiments with theatre form co-exist with an atmosphere of suggestion, fear and dread. Behind each family, Churchill suggests, lurk dark shadows. The other cast members, Kwabena Ansah, Patrick McNamee and Rebekah Murrell, are likewise impressive and the design by Miriam Buether stresses the theatrical nature of the show. During the brief pauses between the short plays, there are some fun juggling and acrobatic acts. And although the tone is emotionally cool at all times, the spectres of anger and violence brood in the background of even the most banal tales. Yes, this is how it is.

This review first appeared on The Arts Desk . It was reposted with permission from Aleks Sierz’s blog.

Glass. Kill. Bluebeard. Imp. are at the Royal Court until 12 October.