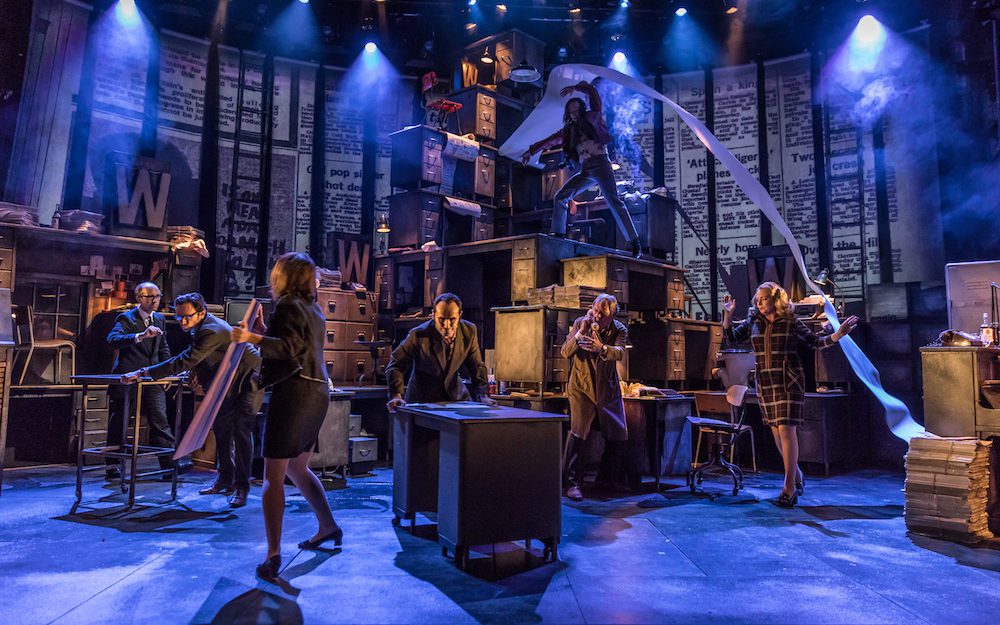 The recent general election result proves that the power of the rightwing press has diminished considerably in the digital age, but there was a time when media magnate Rupert Murdoch could make grown-up politicians quake in their socks. James Graham, whose This House, his National Theatre play about the 1970s hung parliament, was a big success in the West End recently, now looks at the origins of the Sun, and its Frankenstein-like rejuvenation in 1969, when Murdoch was a young Australian tyro whom few took seriously. He is played by the ever-likeable Bertie Carvel in a theatrically confident production from the director of the big hit Enron.

In Ink, now at the Almeida Theatre, Graham tells the eye-opening story of how Murdoch bought the ailing Sun newspaper and turned it into Britain’s most popular tabloid by focusing on the tycoon’s relationship with Larry Lamb, the paper’s new editor, and the rivalry between Lamb and his former boss, the Mirror editor Hugh Cudlipp. At the start, Murdoch has to snap Lamb out of his traditional Fleet Street somnolent habits, inspiring him to break the rules and become more populist. Gradually, the pupil begins to outstrip (especially as regards Page Three) the master as he learns the dark art of giving people what they didn’t even know they wanted: sex, fun and humor.

In the process, Lamb clashes with Cudlipp, a kind of father figure, who represents patrician conscience rather than popular commerce. Murdoch gives his man a year to make the Sun a better-selling paper than the Mirror. Schematically, Cudlipp’s definition of journalistic values — worthy, responsible and politically articulate — is a thing of the past; Lamb is the man of the future, who redefines the nature of working-class journalism. But Graham also has another agenda: this is also a play about storytelling, both in newspapers and in the theatre. His elaborate first scene focuses on the five Ws of journalism — who, what, where, when, and why — with a neat little twist.

The main problem with the play, however, is that it talks too much about stories, but shows too few of them. For example, the most dramatic thing to happen to the Sun in its first year under Murdoch was the kidnap of Mrs Muriel McKay, the wife of Sir Alick McKay, the deputy chairman. The cynical way in which Lamb exploits this terrible event is not only full of drama, but also points forward to the Sun’s later outrageous behavior and flouting of journalistic ethics. It was the first step on the road to The News of the World phone-hacking. But it is not until way into the second half of this three-hour evening that we get to this story.

Before then, we get a long introduction to the Sun’s new staff, a lecture on tabloid design and another on hot-metal printing. There are also episodes about archaic trade union practices (remember them?) and emerging feminism. Murdoch gives the cosy British Establishment frequent tongue-lashings. These are fascinating topics, but their inclusion does slow down the play, sucking out its dramatic life. Graham has clearly done a lot of reading, but he should know by now that good writers have to cut their research and concentrate on the main game. Of course, all of this material is presented in a lively, colorful and engaging way by director Rupert Goold, who turns circulation wars into a horse race, but all this is mostly extraneous to the crucial core of the narrative. The detail is great for journalism buffs, but its inclusion feels like unnecessary padding. The song-and-dance ensemble scenes, designed by Bunny Christie on a pyramid of desks, look great but add little to the tale.

Still, Carvel has plenty of attractively silky charm and gives Murdoch — who like the Devil gets most of the best tunes — a fair dollop of youthful energy, while Richard Coyle’s increasingly desperate and savage Lamb grows in stature as he discovers the thrills of populism. By contrast, David Schofield as Cudlipp conveys the anguish of an avuncular man whose time is past, and Justin Salinger and Sophie Stanton give individual life to a couple of the staffers. The female point of view is briefly articulated by Pearl Chanda, who plays the model Stephanie. Despite a large and hardworking ensemble, this does feel like a documentary in search of a stronger story.

This review was reposted with permission from Aleks Sierz.