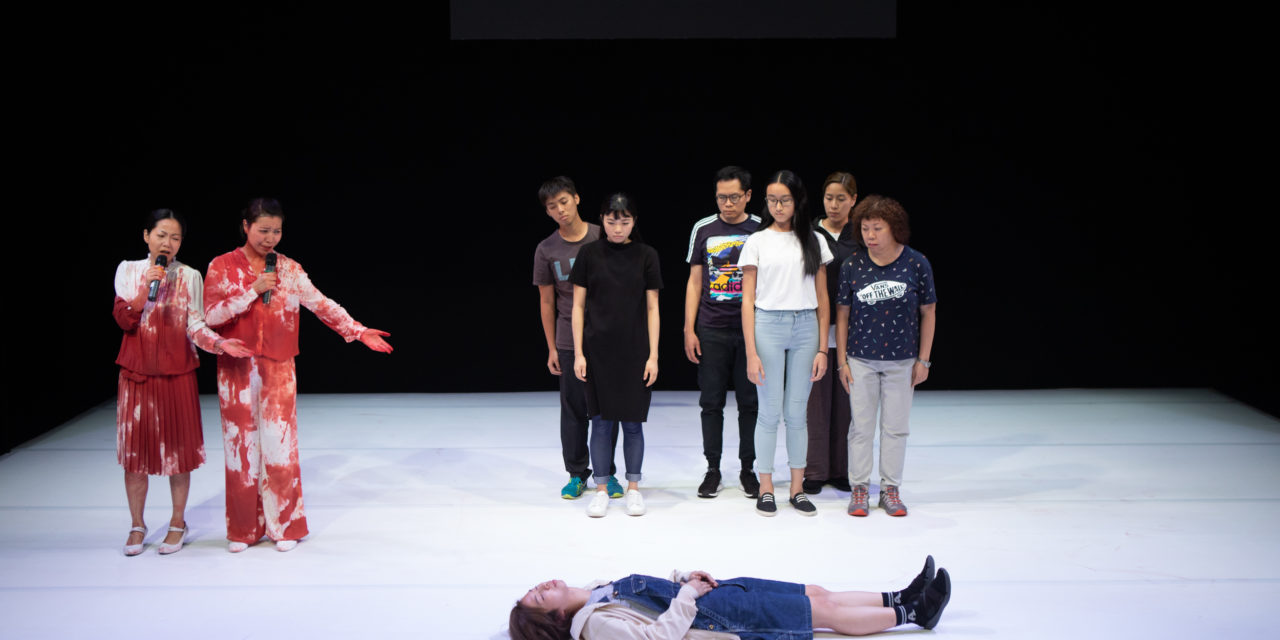 Hong Kong Repertory Theatre (HKREP) has been presenting the biannual International Black Box Festival since 2014, and this year, co-curating with West Kowloon Cultural District (WKCD) for the very first time, the Festival is renamed as the Hong Kong International Black Box Festival (HKIBBF). The Festival presented four international productions which all are surrounded by the theme of ‘Becoming Real.’ Interestingly, all four productions included non-trained ‘actors’ to become performers of the shows.

In the curatorial statement, co-curators Wai-Hang Fung, Assistant Artistic Director of HKREP, and Kee-Hong Low, Head of Theatre of WKCD, emphasises that the ‘projects that we have curated for this festival invite us, the audience, to be aware of our agency.’ Using non-trained ‘actors’ is a device to extract the realness of a situation or a narrative by departing from the artifice of the suspend of disbelief. Not saying that regular theatrical productions will not give out the same impact of catharsis, the audience’s real emotional experience of witnessing a made-up situation, but using non-trained ‘actors’ does give the opportunity to break down the ‘fourth wall’ between the performers and the audience.

One of the projects HKIBBF curated for this year is Oedipus Schmoedipus by post of Intimate Spectacle. Produced in 2014 by company members Mish Grigor, Natalie Rose, and Zoë Coombs Marr, Oedipus Schmoedipus uses the theme of death in all theatrical classics, from Greek plays to Shakespeare to Ibsen, to take a deeper look on the topic and how it connects to the contemporary society.

The thesis is clear: ‘Why do we still need to read these classics?’ According to the ‘Message from Directors,’ Grigor, Rose, and Marr think that the ‘western theatrical canon has a pretty intimate relationship with death, after all.’ Thus they try to use this theme to retrace the reason why these classics are still revived after so many years. What is the ‘spell,’ or ‘curse,’ that these classics, almost all of them written by western white men, that makes the world ‘succumb’ to their authority? 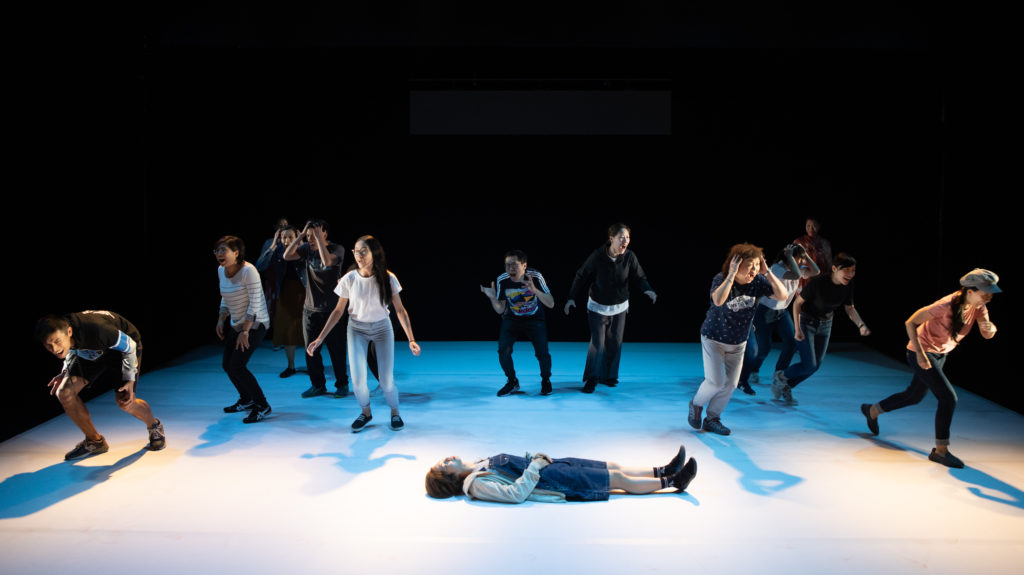 Oedipus Schmoedipus is not just a toured show by actually a Hong Kong revival with all Cantonese-speaking performers. Originally, for the previous English productions around the world, the leading duo, with 25 local volunteers per performance performing as the ‘chorus,’ was performed by Grigor and Marr themselves. This production, however, the leading duo was performed by HKREP resident actors ManMan Kwok and Sui-Hing Man, with a brand new Cantonese version translated and adapted by acclaimed Hong Kong playwright Pat-To Yan.

I have not seen any original English productions, thus I came in to view the production as fresh as a new one, and the result is intimately moving.

Oedipus Schmoedipus opens with Kwok and Man reenacting all the moments of death in the classics (nearly all of them are murders), but to ‘exaggerate’ them with blood and gore, thus the outcome becomes comical. As an academic who is familiar with most of the classics mentioned in the piece, I was pleased for myself to know which moment of death is from which play, but more importantly, the opening sequence gives me a reconsideration that it can also be seen as a massive nonsensical gorefest that basically identifies those moments back in the classics. They are that violent and unromantic. The piece declares right at the beginning that we might have a fall on the ‘beauty’ of those classics when in reality, they can be as ‘ugly’ as street commerce.

After that, we have three stage managers becoming out to clean up the bloody stage. The duration of it is not short, but very effective, as, in the end, the stage is spotlessly clean. It basically suggests the audience that this is still theatre, a place of fakery. Then the question arises: ‘Why theatre and death?’

With this setup, the following hour of Kwok and Man’s comic-duo-esque presentation has a reliable foundation for the audience to think the relationship between the two. This is not the reenactment of the classics but a meta-explanation or meta-exploration on the classics. The language is simple and strong, and the presentation gives the affections towards the audience. Some of us laughed so hard at some of the jokes that one as an academic or a theatre practitioner can relate to, while they also suggest the nonsense of the everyday life. Yan’s brilliant version of the piece gets so close to the temperament of Hong Kong that even a non-theatre-related person can have a doorway to connect with the classics mentioned.

Every now and then, the 25-people chorus will come out in different amount or form to recreate the moment where death is mentioned in the classics. One can say that it is the cliché application of Brechtian theatre where the audience will alienate themselves to question the purpose of the deaths. However, I think to use these non-trained performers, let alone they were only called and to prepare their performances for only three hours before the show starts, gives a larger texture for the piece. As they are just ordinary people, their delivery on these classic moments are very spontaneous (though of course, as volunteers who have an interest in theatre, some of them might already have amateur experiences already), and turns out, these moments really give weight to these lines. 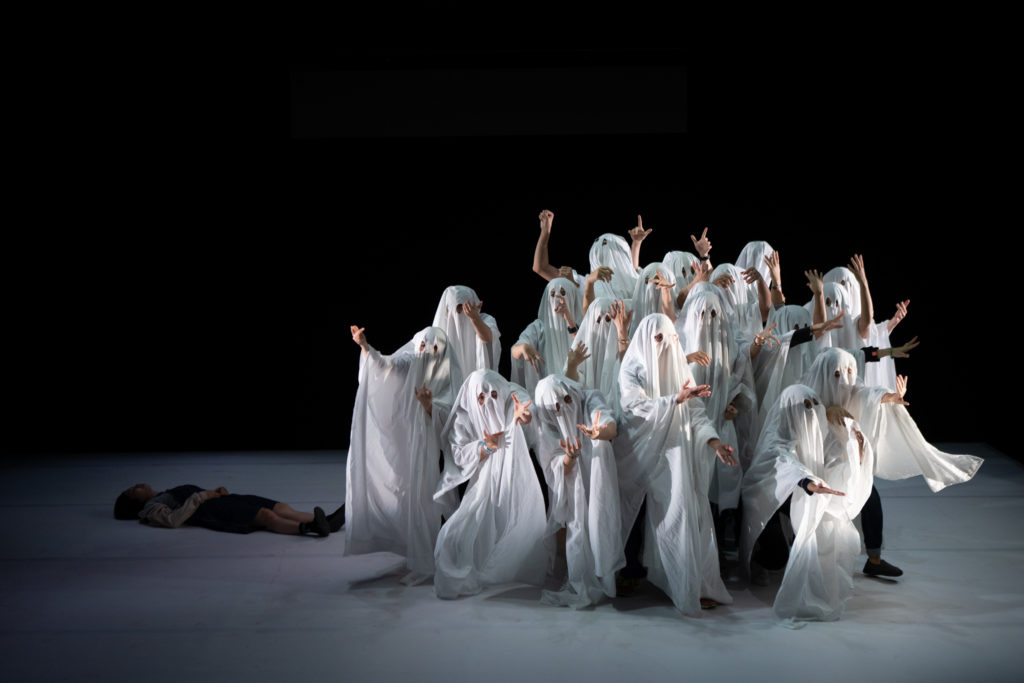 It is the structure Grigor, Rose and Marr established for the piece that drives these moments to magic. The writing-trio never hides their sharp, witty criticism on the western classical canon that it is a white-male-dominated narrative. However, personally, I feel that the cynicism they profess in the piece, with Yan’s similar cynical reinvention, and Man and Kwok’s grounded leadership and delivery, actually unmask the precious core of why these classics are still performed in the world both in period costumes and by having a contemporary remake.

Deconstruction is a method to ask questions and tackle the themes underneath the realistic façade in theatre, and I can totally see that in Oedipus Schmoedipus. To deconstruct, they let non-trained spontaneous performers performing in a bare white stage, designed with thought by Robert Cousins, and gives the audience back to new findings of the purpose to see deaths on stage. When an old woman utters the line ‘I’m going to die’ without any artificial agenda, it strikes me really hard to feel emotions, to empathise not just the ‘character’ she is playing but herself.

And isn’t this the purpose to go to the theatre, to experience the real through unrealness? One, similar to Vicky Frost from The Guardian who ‘still really not sure what [she is] meant to take from [the performers’] appearances,’ might think this is a no-brainer, so why should I spend one hour and 15 minutes to see something he/she knows. I, however, think it is not about knowing the purpose, but to relive and reestablish the purpose, that theatre is not something that is high above. The theatre is something that is responsive to a community of ordinary, and if we can see past this, even an uneducated person can relate to ‘classics,’ something that will still be generated for the following decades or centuries, because human emotions appeared in the theatre is universal.

By the end of the piece, the performers celebrate death by dancing in spontaneous movements, yet simultaneously, the whole theatre is celebrating life as we the audience recollect our living moments through the dance. A young woman delivers a monologue at the very end, and her last words are, to paraphrase, our co-existence right now in this theatre is the most important thing. Yes, it is, and thus I could not help but cheer for what I had witnessed, and what I always believe. 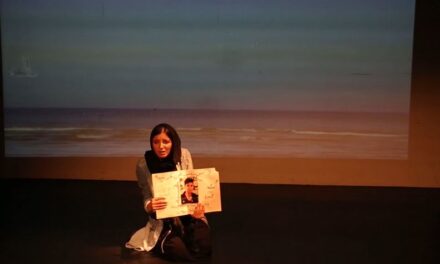