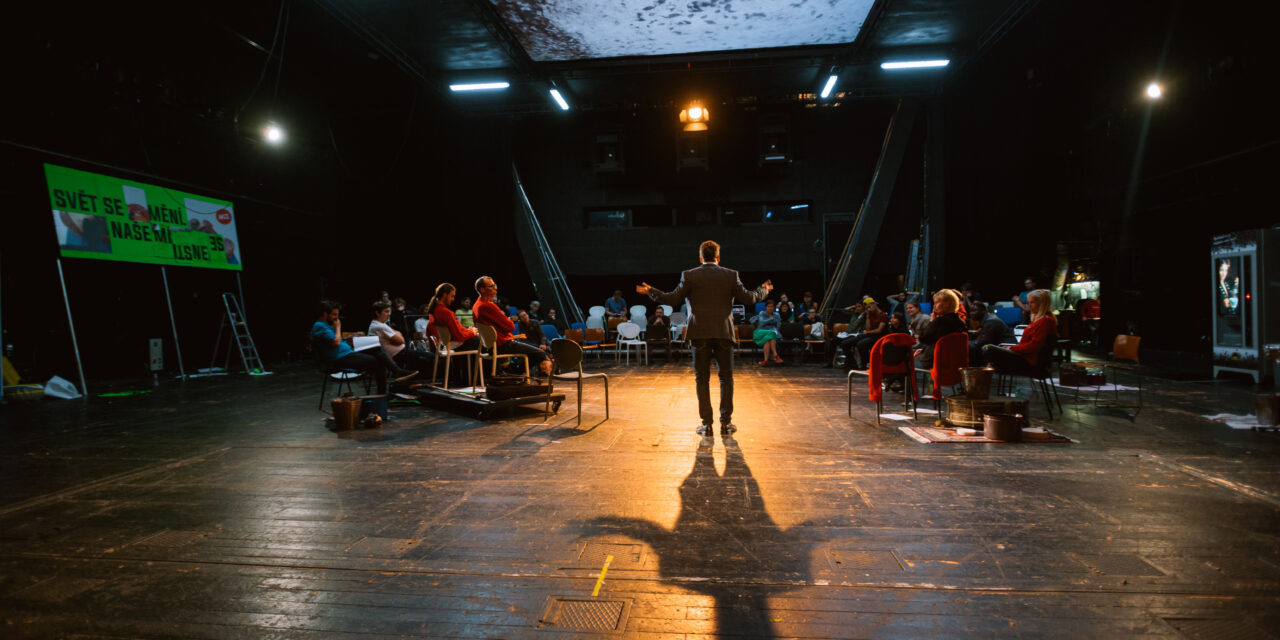 When a work of art has the word “nation” in its title, it invites you to look for the “essential” characteristics of that nation. When it’s performed in the National Theater, in the capital city of a country you’ve adopted as your spiritual home, that temptation becomes even stronger. It is with an attempt at great restraint, then, that I discuss “Proslov k národu,” or “Address to the Nation,” performed on the New Stage of the National Theater as part of the Prague Quadrennial. 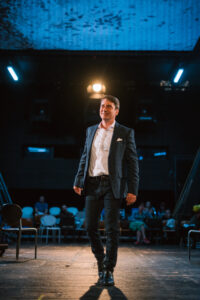 Now one thing stops me dead in my essentializing tracks: it’s not a Czech text. It’s Tereza Sieglová’s Czech translation of texts by the Italian actor Ascanio Celestini. This premiere, directed by Petra Tejnorová, features an ensemble cast of six sensational actors: Lucie Juřičková, Tereza Vilišová, Jindřiška Dudziaková, Filip Kaňkovský, Petr Vančura, and my personal crush, Saša Rašilov. There’s also a small band, and throughout the audience, more plants than a botanic garden. And like a botanic garden, the plants are *diverse.*

Two surprises greet you when you enter the theater. First, it’s in disrepair, with water leaking in through the ceiling, collecting in buckets on the floor. Some of the seats are covered with tarps. Come on, National Theater!, you think. Second, the audience is directed up to the stage, to sit in a folding chair with which more buckets are interspersed. The musicians and some actors enter wearing bright red sweaters on which the show’s title is knitted in white, but don’t be fooled – these red herrings are there to distract you from the cast member you may be sitting next to. 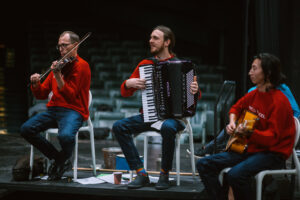 The show is a series of vignettes. Some of them are painfully real and relatable, like Dudziaková’s breathless story of getting her ass regularly grabbed on public transportation, and Kaňkovský’s anxiety-producing explication of suffering from anxiety. Some deal with the assumptions that silently structure our behavior and interactions. Vilišová explains that, despite the moral system you’ve been taught to respect, stolen bread tastes just as good as the bread you paid for. And Juřičková, dripping with smug satisfaction, reasons that if a person like her, who has an umbrella, gives it to some poor schmuck who doesn’t have one, well, nothing changes. The world still has one person with an umbrella, and one without.

In one of the most powerful vignettes, Vančura describes the internal transformation that takes place when you know you’re carrying a gun. You don’t take it out, you don’t look at it, you don’t talk about it, but you think about it constantly, and you know it gives you an alternative to dealing with life’s daily, endless indignities. The nation being addressed may be Czech or Italian, but damn if that doesn’t speak to the American epidemic of gun violence.

This desire for an alternative, for any kind of choice, comes up in many of the pieces. Meanwhile, hanging on the wall behind the stage is a billboard in the process of transformation. A picture of a chlebíček, a traditional Czech open-faced sandwich (and my favorite snack) is being plastered over with the beginning of a sentence that will, presumably, come to form some meaning, but right now the words that are there read: “Svět se nemění,” which means, “The world doesn’t change.” 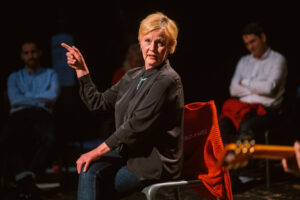 The other thing that keeps coming up is rain. The first vignette takes place in a world that never stops raining, where people are at constant war with the rain but even war is something you get used to. The last one too, finds Rašilov alone, staring into the leaky ceiling in his top-floor apartment, faced with only two alternatives: keep watching powerlessly as the drops of water accumulate, or turn around, look away, and calmly drown. That last vignette reminded me of one of Václav Havel’s lesser-known plays, “The Butterfly on the Antenna,” in which a pseudo-intellectual playwright, his wife, and her mother sit around a table planning a play in which an apartment floods, while their apartment floods. The former, and some others too (namely one about a schoolteacher instructing in the art of standing in a line) reminded me of Kafka: stories of games you’re forced to play, but you don’t know the rules, so you can’t possibly win. 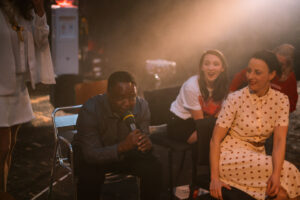 Well, there I am, essentializing again. So while I’m at it, I’ll throw in another characteristic of the Czech nation: first-rate acting. The cast was stellar and featured multiple generations of talented stage and screen actors. Dudziaková, born after the internet, more than held her own against the veteran Juřičková, while the latter’s understated power also gives us all something to aspire to. And Rašilov’s grandfather, who shared his name, played the good soldier Švejk in an early adaptation of the classic modernist novel, but that’s my own personal fetish. The hidden cast in the audience presented a new image of this national tradition, as African-Czech and Asian-Czech performers were brought into the show, seemingly out of nowhere but in fact, they’d been there all along. 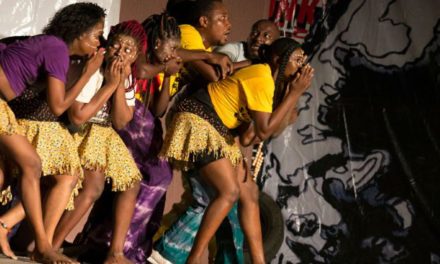