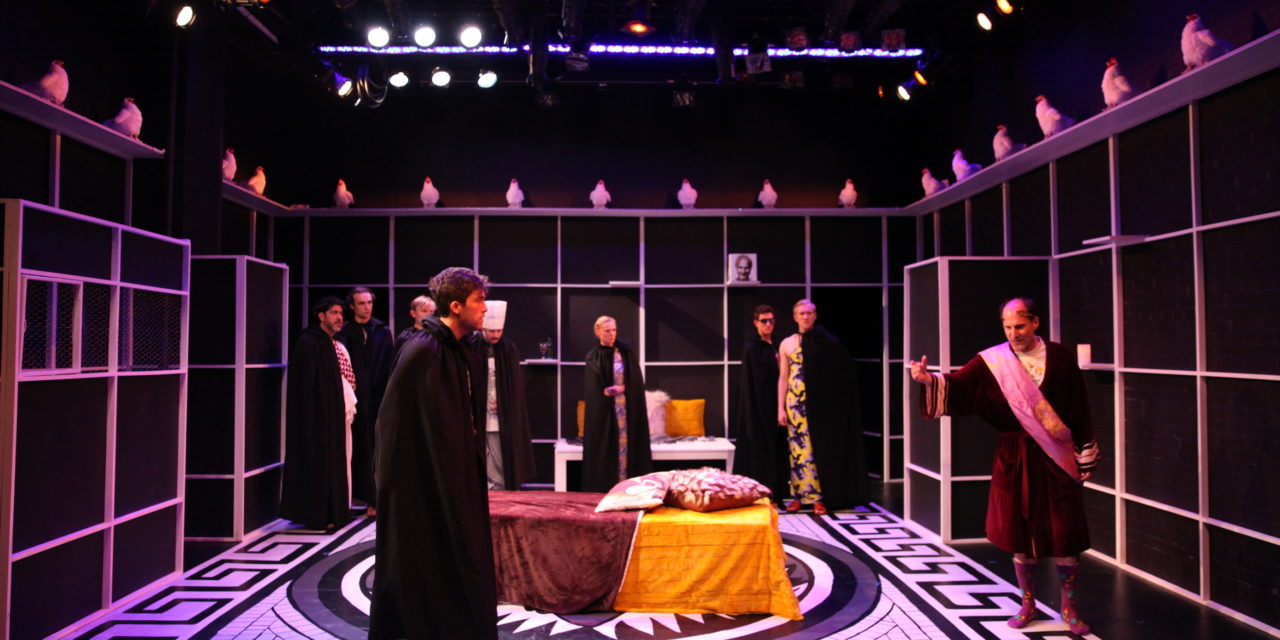 The Roman empire is under threat and is falling apart. Romulus is emperor and cares more about which of his chickens—mostly named for prominent emperors—have lain eggs than what is happening to his territories, conquered and besieged by “Teutons.” The spirit on stage, where Chika Shimizu’s geometrically spare set incorporates palace and chicken coop with a feel for pop-art imperium, is farcical and more than a little absurdist. Especially with that opening dance routine in which beaked, robed actors bounce about merrily. Welcome to Swiss author Friedrich Dürrenmatt’s Romulus The Great, directed by Chongren Fan, Artistic Director of the Yangtze Repertory Theatre, in Manhattan.

Originally produced in 1950, the play, perhaps, invites immediate analogy to whatever conditions it is produced under. Dürrenmatt, a resident of a country neutral in the Second World War and a writer with socialist leanings, might be considered to be looking askance at what would follow the de facto dissolution of the British Empire. The fact that the invaders of Rome and the chief Axis power were both Germanic is just one of those great ironies of history. Dürrenmatt wrote in German and no doubt had his eye on the division of the Reich into East, or socialist, and West, or capitalist territories. The Yangtze production uses the English translation by Gerhard Nellhaus, which can feel a bit talky rather than succinct at times, making some actors spit out lines too quickly for good diction.

Empire is a big concept and here it stands for a status quo that, however indefensible, will have its defenders. Gore Vidal, defending his rather less than acclaimed 1962 Broadway adaptation in 2008, quoted Voltaire:

“True comedy is the speaking picture of the follies and foibles of a nation.”

Today, in the U.S. of Donald J. Trump, the aptness of Fan’s production comes from the fact that Romulus sees the empire as hopelessly corrupt and played out. For Romulus, we learn, being conquered is the best thing that could happen, and the Germanic hordes are just what Rome deserves. 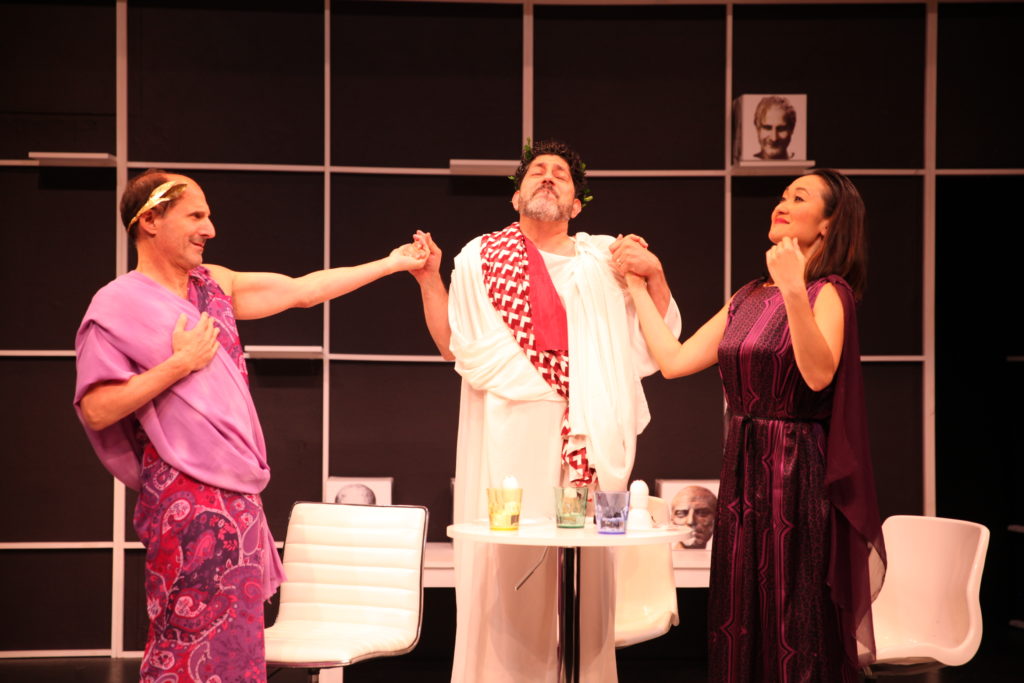 Romulus reveals his views while entertaining various visitors in the course of the day—the Ides of March!—as he ponders staying his course of stoical inertia. Played by Jim Shankman with a kind of dreamy indifference laced with weary authority, Romulus is either a thorough cynic or a wise man with no illusions. The play leaves it to us—the audience of the moment—to make the call. He’s ably supported by his patient attendants, Achilles (Sheilagh Weymouth) and Pyramus (Elisa de la Roche), and by the steady bureaucrat Tullius Rotundus (Annemarie Hagenaars), capable of burning the imperial archive in order to save it.

The play begins with the huge disconnect between military urgency and civilian sang-froid, as soldier and athlete Spurius Titus Mamma (Ryan Egar) arrives breathless and wounded to tell of what has befallen his beloved Pavia only to be met with a court where cracking jokes and eggs and taking drama lessons is the order of the day. Rea (Dana Kreitz), Romulus’ daughter, does a comic invocation of Antigone as acted by someone tone-deaf to the classics, abetted by Marcus Crawford Guy as her coach.

In the early going, Romulus seems mostly the straight man to some campy types—such as Zeno, the Isaurian (Mark J. Quiles), a collegial potentate beleaguered by his attendants and looking for asylum, and Apollonius (Byron Clohessy), an art dealer willing to take the moldering busts of previous Roman greats off Romulus’ hands. Later, when Emilian (Colin Ascercion), Rea’s wounded and MIA betrothed, turns up and chastises all for the lost glory that was Rome we hear the kind of patriotism that will never concede its idols have clay feet. Romantic and stirring, Ascercion’s Emilian is also savvy enough to see that not all sacrifices are military. He’s willing to forego personal happiness for the sake of his country.

Romulus emerges as the fly in the ointment to whatever scheme his family—queen-wife Julia (Michiko Sasaki) and Rea—would cook up to continue as a royal family. Watching the play in a theater on 36th street, less than two miles from Trump Tower, it’s hard not to think about our own “first family” and what they might be willing to do to keep hold of their power. Sasaki’s Julia is not a very sympathetic First Lady, but she does make her position clear: she didn’t become a royal to give it all over to the barbarians. The favored solution, it seems, is the possible marriage of Rea to Caesar Rupf (Christopher McIntyre), a capitalist with a gift for converting toga-wearers to trousers, played with unctuous self-importance in a world where the only values are commercial values. He’ll simply buy off the Teutons. 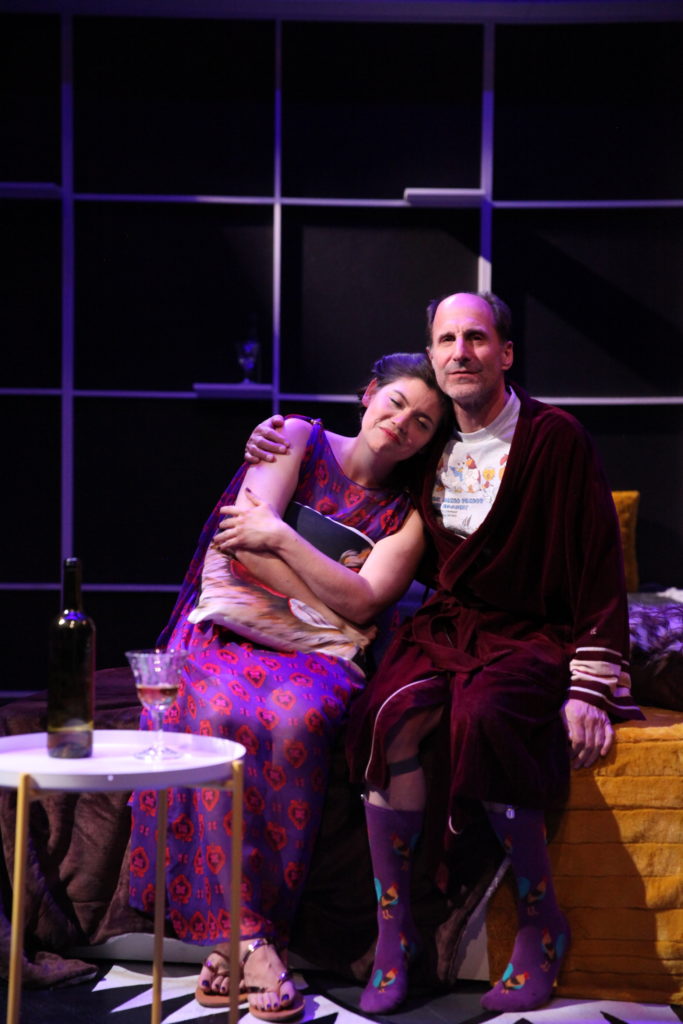 In the second act, Romulus truly finds his voice, no longer simply chiding or ribbing his interlocutors but stating a position. His scenes with both wife and daughter have surprising nobility, and his interactions with his attendants, faithful until Rupf gives them a better offer, become almost tender.

The emperor’s audience with Emilian and the other would-be assassins displays a viewpoint that only a man who embodies an empire he hopes will die with him can hold. His final meeting is with Odoaker, leader of the Teutons, a man full of anxiety at what it means to rule in such a world. Soon, he suspects, his ambitious and martial nephew Theodoric (Neil Redfield) will do away with him as easily as, together, they have defeated Romulus. Après il, le deluge, and Odoaker doesn’t want to drown. 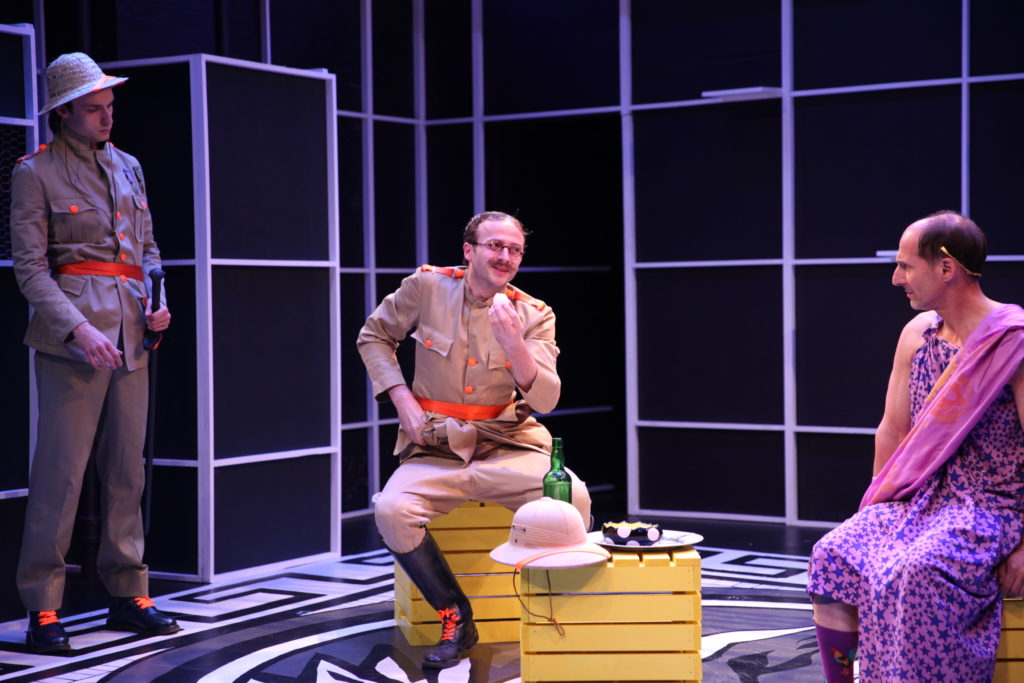 The ending gives us leaders facing the fact that they are the fools of history, that the times have a will of their own, leading Romulus to a wise glimpse at how phantasmal are both the past and any better future we dream of. The present, friends, is what we’re stuck with and, it seems, there’s nobody here but us chickens.