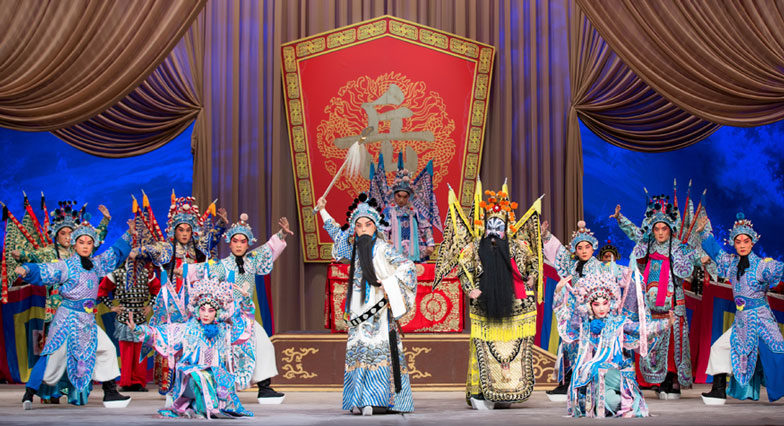 Founded in 1955 by the renowned Chinese theatre star Mei Lanfang, the China National Peking Opera Company (Guojia jingju yuan)–currently the top of its kind in the People’s Republic of China– has recently returned to the London stage to perform for the third consecutive time at Sadler’s Wells Theatre. This year’s playbill featured two productions–A River All Red and The Phoenix Returns Home. These are two diametrically opposed plays, which a Western audience might easily classify as a tragedy and a comedy, respectively.

Jingju (Peking Opera) is a 200-year-old style of indigenous Chinese theatre and a true specimen of a Gesamtkunstwerk. It combines several forms of artistic expression, namely song (chang), speech (nian), dance-acting (zuo), and combat (da). These are complemented by an apparently non-naturalistic acting style made up of stylised gestures and facial expressions, a range of extremely colorful costumes, and color-coded face paint. Still, jingju is also a lot more than the sum of its external features, which might appear “strange” to a non-initiated viewer. With a rich repertoire of plays based on ancient stories, legends, and also historical events, Jingju can serve both as a window onto China’s cultural heritage and a prism against which easy exotic depictions of the Chinese “Other” can be deconstructed.

Focusing on the quasi-legendary figure of General Yue Fei of the Song dynasty (960-1279 AD), played by Yu Kuizhi, A River All Red is a military drama (wuxi) in eight scenes. It follows the protagonist’s descending parable terminating in his unjust imprisonment and subsequent martyrdom. A range of potentially transcultural themes can be identified, such as the conflict between good and evil, the acceptance of sacrifice and the fact that misfortune may come from human iniquity rather than being ascribable to blind fate or to other forms of transcendence.

Overall, this is a male-dominated play, featuring spectacular scenes of combat, which enabled the majority of the actors to make full use of their physical dexterity to perform a range of gravity-defying acrobatics; these left the audience awe-struck, generating repeated rounds of applauses and shouts of appreciation (hao!). The usage of high-pitched singing and poetic language was particularly appropriate to convey the solemnity and pathos of some crucial scenes such as the lamentations of Yue Fei’s wife (played by Li Shengsu), his public dismissal where we see him stripped of his scholarly cap and robe, and the final tableau in which–after pronouncing one last patriotic speech–he faces his imminent death with remarkable courage and stoicism. Furthermore, I found particularly impressive the heated debate between Yue Fei and the treacherous Prime Minister (whose white-painted face visually conveyed his nastiness) in scene 3, in which they argue their respective cases in the Emperor’s presence while performing a frenzy dialogue that reminded me of the agon in Greek tragedy. Finally, despite the traditional paucity of stage props, which were limited to a table with a few chairs and a painted backdrop that changed according to the story’s progress, modern technologies were occasionally employed. Dark-blue lighting was used to convey an atmosphere of secret plotting, whereas a digital projection of a video of the Prime Minister’s wife onto a wall was used to erase the spatial limits of the stage allowing the portrayal of two simultaneous scenes: one in the projected video, the other on the stage. But the icing on the cake of special effects came a few moments before the curtain fell when snowflakes came down from the ceiling to romantically highlight Yue Fei’s farewell words before the execution. 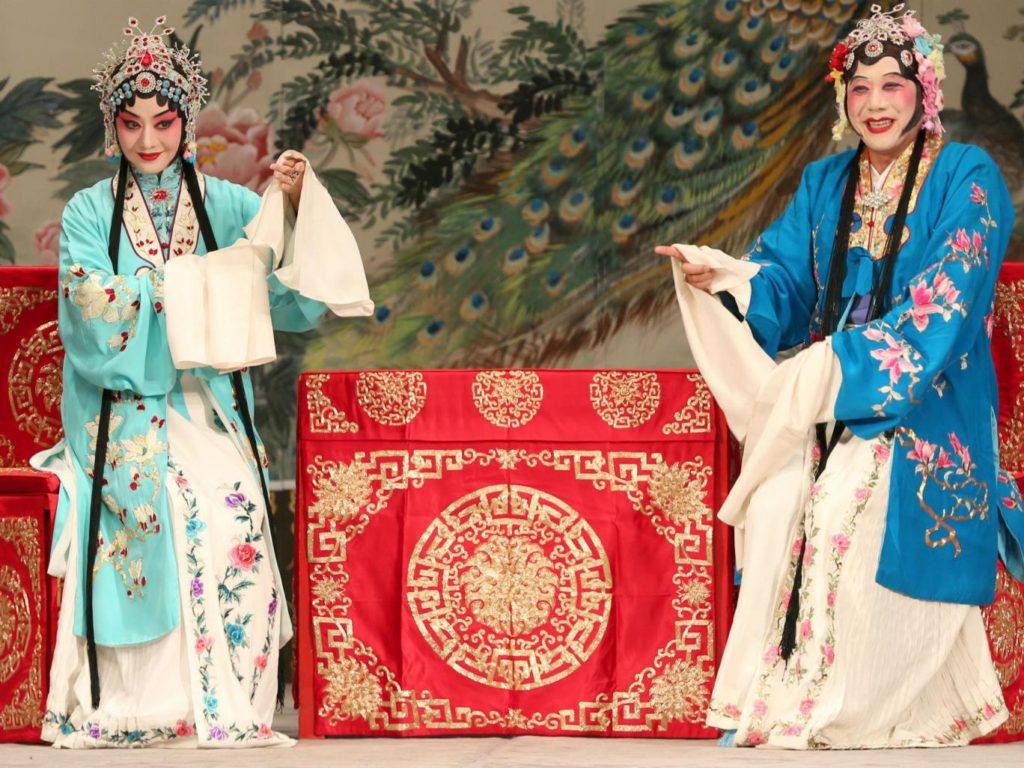 Conversely, an atmosphere of joyful liveliness and playfulness characterizes the two-act play The Phoenix Returns Home, which is set in the Ming dynasty (138-1644). Right at the very outset, a servant, played by a chou (clown role), appears on stage. Breaking the fourth wall, the character introduces the story, anticipating that a plot full of twist and turns will culminate with a happy ending, or a “great reunion” (da tuanyuan), as it is known in Chinese. Therefore, the audience can just relax and enjoy the many comic elements of this family drama, which centers around Minister Cheng’s and his wife’s separate plans to marry their daughters–the charming and demure Xue’e, and the homely and unruly Xueyuan–off to the young and handsome Mr. Mu. Meanwhile, the wealthy but unattractive Prince Zhu has also got his eye on the beautiful Xue’e and is determined to use trickery to marry her himself. However, as it often happens in this type of comic plots, treachery and maliciousness backfire while ambiguity, the unsaid, and accidental miscommunication delay the accomplishment of Heaven’s (and Mr. Cheng’s) rightful plans, that is, the marriage of the beautiful betrothed.

The Phoenix Returns Home starts as a fast-paced play, slowing down during the second act in which the comic tension remains high until the very end, and one wonders whether or not the happy ending that was promised at the beginning–namely, the marriage of Xue’e and Mr. Mu – will actually come true. Combining a wealth of humorous metaphors, paradoxical situations, witty dialogue, and amusing contrasts, this play abounds in dramatic irony and can be placed alongside the European genre of the comedy of errors, given that its comic force mainly arises from the game of mistaken identities and thwarted schemes. Despite a tendency to side with the good-looking couple, it is the less attractive sister, Xueyuan, who often takes center stage, capturing the audience’s gaze and ears with her pranks, coarse manners, and masculine voice. Her “monstrous” appearance, whereby she is considered a “chicken” as opposed to her sister who is the titular “phoenix”) is enhanced through cross-dressing as this character was played by an amusing and talented male actor. Conversely, the character of the beautiful Xue’e is played by Li Shengsu, whose clear voice and thrilling singing style both compensate for a less powerful stage presence due to her role of a shy and self-composed young lady (qingyi).

To conclude, both productions were successful in making traditional Chinese theatre accessible to a wider audience and it is hoped that these international tours can further contribute to the inclusion of China’s national performing arts into the realm of world theatre.

Letizia Fusini is Associate Lecturer in Chinese Theatre in the Department of Theatre and Performance at Goldsmiths, University of London.