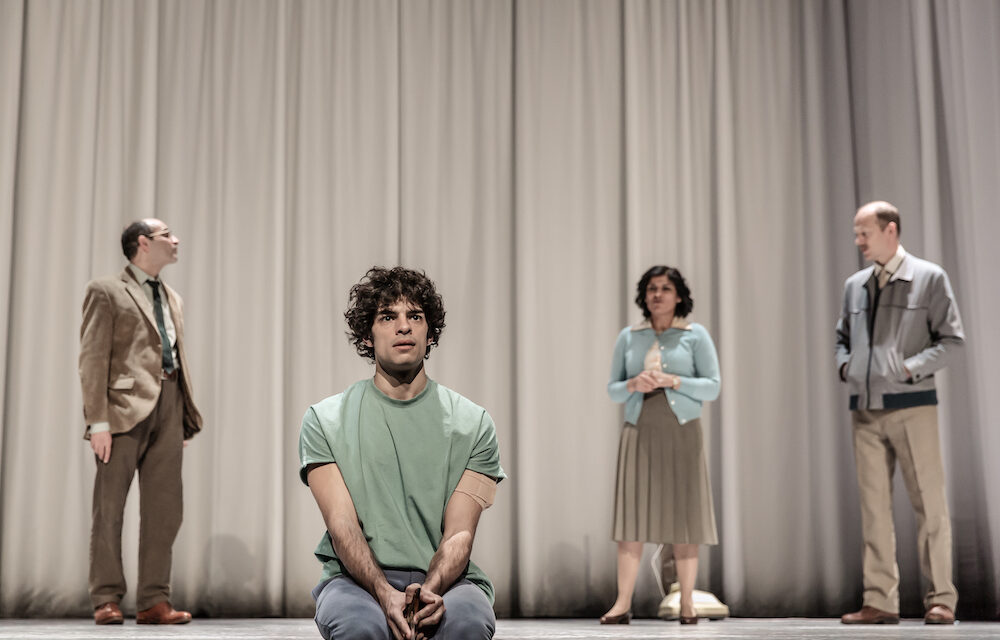 There is no doubt that Peter Shaffer’s Equus is a modern classic. But does that justify reviving this 1973 hit play in our current social circumstances? And what can it say to us today? The good news is that up-and-coming director Ned Bennett is at the helm of this version, and that he brings not only his individual vision to the piece, but also plenty of guts and balls and feeling: this is much more than a simple retread of John Dexter’s legendary original, with its platform-hooved man-horses and starry casts here and in New York (Alec McCowen, Anthony Hopkins and Tom Hulce). Nor is there any echo of Thea Sharrock’s 2007 West End version which starred Daniel Harry Potter Radcliffe. In fact, Bennett’s revival victoriously banishes all these memories, being a particularly thrilling and emotionally strong evening entirely in its own right.

As is well-known, Shaffer was provoked into writing the play after hearing about the horrifying case of a 17-year-old boy who blinded six horses in a county town in Suffolk. For his fictional version, the playwright created a psychological whydunnit in which his protagonist, the psychiatrist Dr Martin Dysart, tries to find out what caused young Alan Strang to commit a terrible act in the local stables. What emerges is a story about the boy’s rather sheltered upbringing by his parents, the religious Dora and the rather uncommunicative but controlling Frank. Added to this, Alan reveals details of his brief and awkward relationship with Jill, a young woman who works in the stables and who seduces the inexperienced young man. But the boy is less interested in sex than in worshiping a god of his own invention — Equus.

In many ways, this is a classic 1970s story: the sexual openness and hangups of the youngsters, the belief that psychology can solve mental distress through rational analysis, and the idea of religious ecstasy as a kind of anthropological universal. Typical of the playwright, there is also a very schematic idea of the conflict between being a creative individual, even at the cost of mental distress, and being a normal member of society, having been cured of the desire to adore a self-made deity. Today, this concept of a cure for psychosis that involves a kind of mental castration feels very old-world, and the conflict between Apollo and Dionysus a bit undergraduate, yet the play retains a vivid sense of surreal imagery, with its dreams of equine beauty, pagan worship and its barely suppressed sexual energy.

Bennett’s vigorous version, a co-production with English Touring Theatre, is immediately exciting because of the diversity of its casting, its enveloping physicality and its imaginative theatrical intensity. There is an acute contrast between the sterile clinical world of Dysart’s mental hospital, rendered in pale shades by designer Georgia Lowe, and the radiant heat of the passionate scenes between Alan and the horses he adores, especially his favorite steed Nugget. Rainbow colors drench the stage; music provides ominous chords. The show pulses with dynamism. Movement director Shelley Maxwell has had a great input, giving the horses a stage presence that is more like modernistic dance than animal mimicry. They exude power and physical might, but in a symbolic way that echoes the best moments of Shaffer’s text.

The two main actors, Zubin Varla (Dysart) and Ethan Kai (Alan), are convincing and watchable, with the former suggesting the loneliness of a professional who has lost his calling, while the latter has all the muscular anger and glowering passion of the boy who has supped with his own demons. Varla manages to make self-doubt compelling; Kai is a teenager clinging to his fantasy world. Syreeta Kumar (Dora) and Robert Fitch (Frank) double as horses, while Ruth Lass is Dysart’s reasonable interlocutor and Norah Lopez Holden the open-hearted Jill. Most strikingly, Ira Mandela Siobhan creates a fine and thrillingly majestic Nugget. Although much of Shaffer’s writing is dutifully plodding, the play’s story arc builds beautifully into a compelling narrative and Bennett tackles it with gusto (I’m tempted to say “at a gallop”).

In a society where normality and conformity have never been more highly valued, Shaffer’s argument about how the cost of being cured of obsession is a loss of humanity has renewed resonance, even if it still offends the psychiatric profession, while the text’s slight mentions of Biblical cruelty have acquired a new echo in our current circumstances, bringing to mind Christian and Islamist fundamentalists. Dysart’s desire to believe in past Greek mythology retains a contemporary sense of nostalgia, while the moments when the text emphasizes the story’s Englishness are ironically highlighted by the diversity of the cast. But in the end it’s the sheer theatrical excitement of Bennett’s vision — sometimes ferociously passionate, sometimes movingly gentle, and, at the first act climax, absolutely billowing with grandeur — that stays with you. Yes, this is a play for our time!

Equus is at Theatre Royal Stratford East until March 23.

This article appeared in Aleks Sierz on February 21, 2019, and has been reposted with permission.