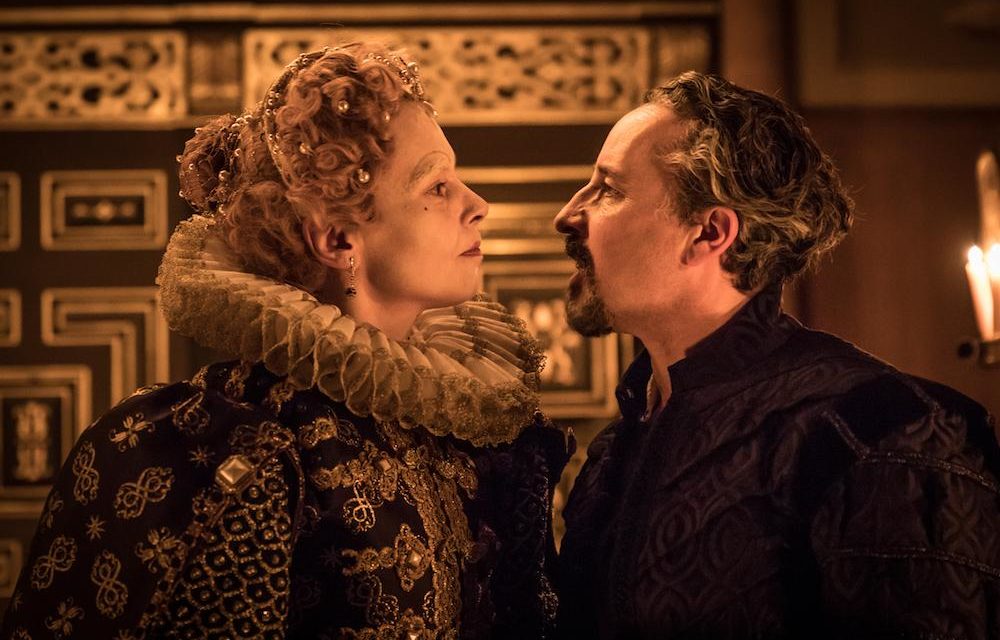 Who will watch the watchers? As Sir Francis Walsingham, Queen Elizabeth I’s spymaster, says, in Anders Lustgarten’s intriguing new play, “Even a secret theatre requires an audience. It’s not enough that men are watched; they must think themselves watched, even when they are not.” And the logical extension of this idea of the surveillance state is that the watchers themselves are being watched, the manipulators manipulated. If, as John le Carré’s once said, “espionage is the secret theatre of our society,” this drama by one of our most politically acute playwrights gives a historical context to that insight.

Set in the 1580s, the play shows how Walsingham’s defense of Elizabeth from Catholic plots and assassination attempts results in hunting down the Jesuit missionary Robert Southwell, the revelation of the Babington plot and the execution of Mary Queen of Scots, followed by the death of Sir Philip Sidney (Walsingham’s son-in-law) and the repulsion of the Spanish Armada. The storytelling is thrillingly brisk and lively, and there’s a foiled assassination attempt, a torture scene and an execution (as well as a medical operation that feels like another form of torture.)

At the center of the web of intrigues and double-crosses, and double-double-crosses, is Walsingham, a somberly dressed figure with a phenomenal memory for detail and a filing system that clearly anticipates the data collection of today’s GCHQ. He is the servant of Sir William Cecil, Lord Burghley, the Principal Secretary to the Queen, and—because of his low birth as the grandson of a cobbler—has a keen motive to prove his usefulness. Haunted by his experience of the Bartholmew’s Day massacre of the Protestants in France, the 9/11 of Anglican England in 1572, his job is the passionate pursuit of Catholic plotters and Jesuit missionaries.

Walsingham’s private life is complicated by the marriage of his daughter Frances to Sidney, an aristocratic courtier who Elizabeth wanted to marry a French princess for reasons of high diplomacy. When Walsingham decides to enlist Sidney in a foreign war, the family tensions boil over. At the same time, Elizabeth is skeptical of the value of his espionage, and, with typical parsimony, cuts his funding. Lustgarten’s image of this iconic monarch—haughty, majestic, foul-tongued and sexually rapacious—provides a memorable cameo in a story full of larger-than-life characters.

The Secret Theatre is effortlessly, and wryly, contemporary in resonance: the surveillance state, suspicious foreign migrants, fake news and the use of propaganda—all of this is convincingly woven into the historical context, and the picture of a nation divided in its core beliefs has an immediate resonance in the Britain of Brexit and Corbyn. Every mention of “Europe” gets an audience response. Lustgarten gleefully mixes past and present in a fast-moving story that is critical, but also informative. You might not always agree with his reinterpretation of key episodes of 1580s history, but the fact that he makes these insightful suggestions is a strong reminder that we tend to accept a history that might well have been artfully constructed for us by myth-makers as well as spymasters.

Written with wit and clarity—a convincing double agent is described as being able to “persuade dawn not to break if he thought darkness would pay him better”—the text shines with allusions and the story it tells is satisfyingly provocative. All through Walsingham’s career runs the question: who in fact is manipulating whom? Who has the most power? Who controls historical memory? Director Matthew Dunster’s production is a crisp and well-paced affair, which uses the atmospheric, candle-lit atmosphere of this venue to great effect. In Jon Bausor’s design, small models evoke Elizabethan London, the Queen’s garden and the Armada, while the paneled setting sprouts filing cabinets and reams of paper.

A splendid cast, headed by a melancholic Aiden McArdle as Walsingham, a spin doctor as well as spymaster and an old man who gradually declines into sickness, and an unforgettable Tara Fitzgerald as Elizabeth, powdered, bewigged and quick to anger, ruling with a vigorous intelligence and a sharp understanding of the men who surround her. If Cassie Layton is a bit too noisy as Walsingham’s critical daughter Frances, Ian Redford is satisfyingly powerful as Burghley while Edmund Kingsley is the slippery agent Pooley. Like the rest of the cast, Sam Marks plays several roles, including the martyr-like Southwell. This is great piece of alternative history that drips not only blood but relevance too.

Its vision is of a divided nation, where power is in the hands of desperately secretive individuals who manipulate its leaders as well as its people, and who invent terrors as well as combating real ones, who use fear as an excuse to increase social surveillance and create an atmosphere of uncertainty. Plots, counterparts, and entrapment create an atmosphere of menace and suspicion. When terrorists acts are manipulated and rumors turned into fake news, a confused and baffled population is prone to panic. On the day after I saw the show, crowds of shoppers around Oxford Street were frightened into believing that there was a gunman on the loose (there wasn’t): that’s what happens when there is a culture of fear. After you’ve watched The Secret Theatre, don’t forget to keep an eye on our own watchers.

The Secret Theatre is at the Sam Wanamaker Playhouse until December 16.

This post originally appeared on Aleks Sierz on November 23, 2017, and has been reposted with permission.