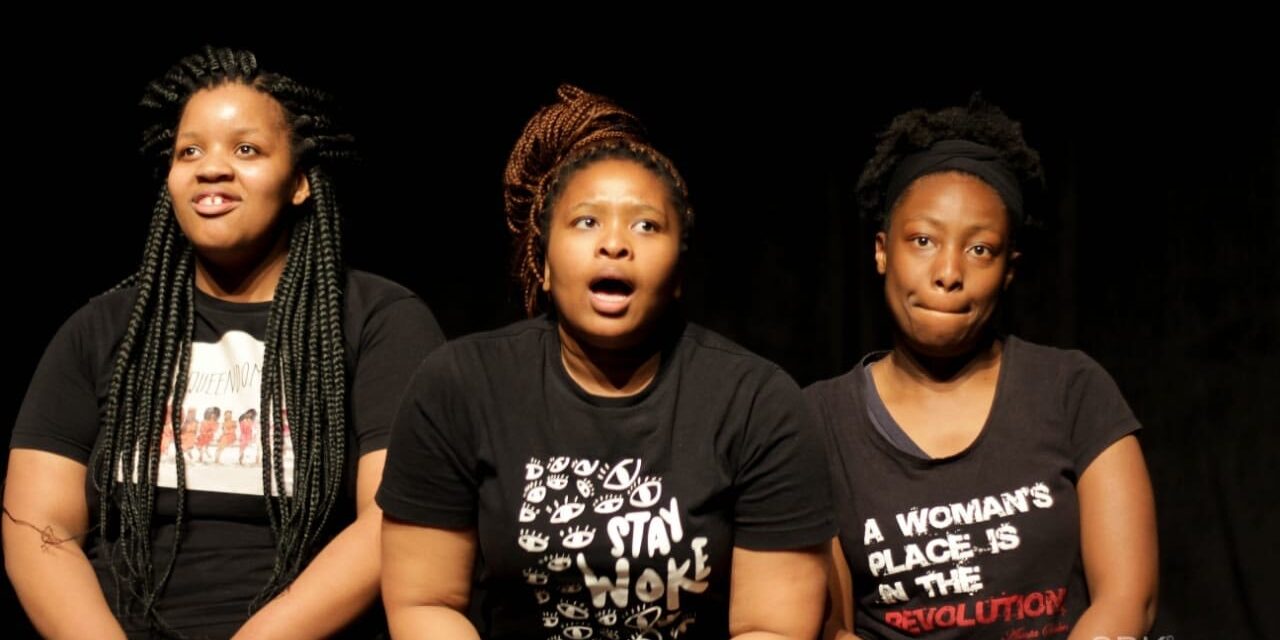 "Text Me When You Arrive" co-produced by The Market Theatre Laboratory. Photo Credit: Hoek van Swaratlhe.

In a normal country, plays like Text Me When You Arrive, which has just ended a short run at the Market Theatre, would not be necessary, but this is not a normal country. To have an entire theatrical production whose sole premise for existence and purpose is to “advise” womxn on “how to not get raped or killed in South Africa,” is certainly an irrefutable indictment on that society.

Gender based violence is not only a South African phenomenon, and this production does not claim that to be so, but it chooses to focus solely on this country for obvious reasons. The regularity with which gender based violence occurs, inherent weaknesses in the justice system which mean few cases are reported, and even fewer result in conviction, added that with the lack of political will and the general sense of entitlement men have over womxn’s bodies, are among the many reasons why productions like Text Me When You Arrive continue to be churned out and remain relevant and necessary.

Text Me When You Arrive is a satirical masterpiece which in following physical theatre conventions, has actors using minimal props and their bodies to play multiple characters and depict various scenarios.  Written through a collaborative creative process by cast members Aaliyah Matintela, Sibahle Mangena and Thuli Nduvane, who are all alumni of the famed Market Theatre Laboratory, it shows in how they are all on par in terms of meeting the physical and emotional demands of this production. Text Me When You Arrive is witty, punchy, and hard-hitting in a humorous way, yet acutely searing in the way it handles the heavy subject matter of gender based violence. Issue-based productions are often accused of sacrificing the craft for the message, but such an assertion does not hold true for this masterpiece!

With polished slice-of-life scenarios which are both vivid and familiar, Text Me When You Arrive manages to take the audience on the precarious, day-to-day existence of what it means to be a womxn in South Africa today.

As a guide of sorts for womxn on “how to not get raped and killed in South Africa,” the choice of using the motif of a YouTube Channel makes the play fresh and accessible. It also ensures that gender based violence is framed from the lens of the would-be victims, which in itself is important and gives the play acute relevance, immediacy and verisimilitude which can only be based on the personal experiences of the three young womxn who make up the cast.

Text Me When You Arrive is directed by the multi-talented Sinenhlanhla Mgeyi, a former member of the Kwasha! Theatre Company, who is also a choreographer and actor. Under his expert directorial vision with mentorship and creative contribution from the equally talented actor, director, and producer MoMo Matsunyane, Text Me When You Arrive is a production that demands attention, and ensures that those who watch not only laugh, but grapple with their own role either as an enable or ally, in the fight against gender based violence.

The production also draws attention to the role of social media in highlighting Gender Based Violence by questioning whether hashtags such as #MeToo, #AmINext and #StayVigilant make any difference, and if in fact digital advocacy does achieve much in terms of issues of ensuring for example that tougher legislation is enacted to curb this scourge.

Text Me When You Arrive was devised and written by the cast who include Aaliyah Matintela, Sibahle Mangena and Thuli Nduvane, and co-produced by the Market Laboratory. It is directed by Sinenhlanhla Mgeyi, mentored by MoMo Matsunyane. It was running at the Market Theatre Laboratory’s Ramolao Makhene Theatre from 26-29 August 2021.

This article was originally published by The African Theatre Magazine on September 4th, 2021, and has been reposted with permission. To read the original article, click here.