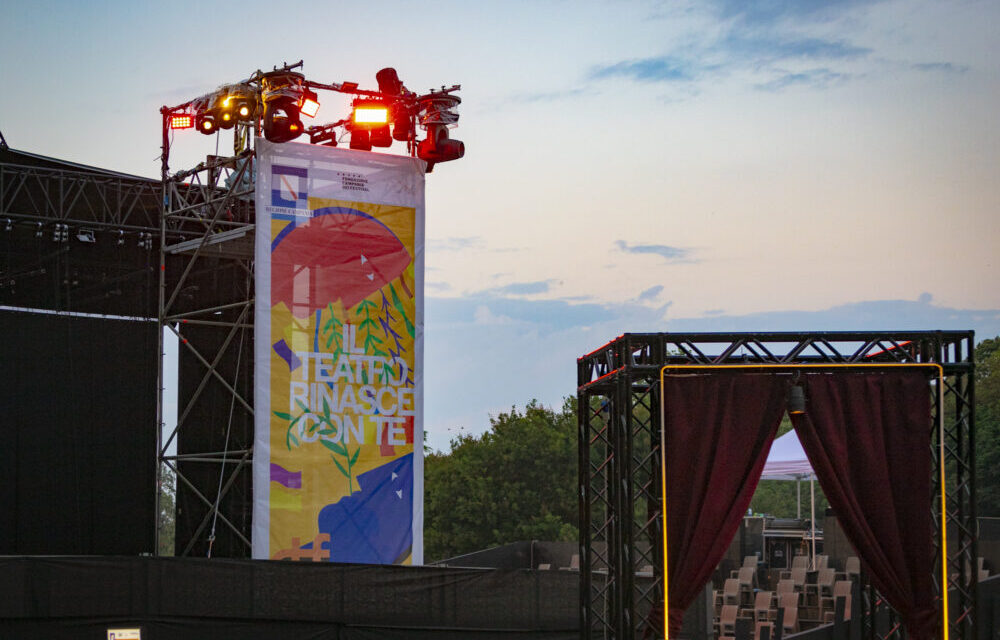 The Real Bosco di Capodimonte is more than a public park in Naples: it is a Paradise, not far from the center of the city. The visitors have the possibility to enjoy a huge, green area with a prestigious history connected to the Bourbon dynasty, and have the impression to walk in an enchanted and peaceful space. It is a place of relax and meditation, in which Art and Nature create a wonderful duet. In fact, the park hosts the Royal Palace and the Royal Museum of Capodimonte with their countless treasures, including the beautiful Capodimonte ceramics.

Due to the pandemic, the last two editions of the Campania Teatro Festival took place at the Real Bosco di Capodimonte, in order to use its immense open area for outdoor productions in safety. The 2021 edition (from 12th June to 11th July) was special and lucky, with the sold out at every night. The people expressed the need to live again a social life, and was in search of the spiritual comfort of Theatre. The initial uncertainties about the reopening of the theatres were counterbalanced by an immediate and astounding answer, with an audience that enthusiastically followed 159 events and the related exhibitions in various locations in Naples.

The images of the poster the catalogue and the promotional materials of the Festival were realized by the famous artist Mimmo Paladino and its slogan, The theatre is reborn with you (Il teatro rinasce con te), testifies the resilience and the consciousness to live a revival for the performing arts, a new beginning. This spiritual renovation had a practical evidence in the staff of the Festival: in the 2021 edition were employed more than 1500 workers of the entertainment industry, as a concrete signal of support for those who lived daily the negative economic effects of the pandemic. Another important sign was the promotion, as in the previous editions, of the public participation with popular tickets (from 5 to 8 euros) and other discounts addressed to the weakest social groups. Moreover, the proceeds from the performances in the Music Section went to charity for the Cutugno Hospital in Naples.

The Real Bosco di Capodimonte hosted eight stages in some strategical points (Cortile della Reggia, Casino della Regina, Giardino Paesaggistico in Porta Miano, Manifattura della Porcellana, Giardino Paesaggistico Pastorale, Praterie della Capraia, Giardino dei Principi, and Cisternone), in order to offer a real map of a “theatrical citadel” in the park. In this edition, 29 prose performances over 38 shows were absolute premieres, and this increased the level of emotions of the actors for the return to work. Moreover, this choice reaffirmed the attention to contemporary dramaturgy: in fact, 85% of the theatrical works staged at the Campania Teatro Festival are written by living authors. See also the YouTube channel.

The people wanted to go over the suffering of the lockdown, and the Real Bosco di Capodimonte was the best place to satisfy the desire of peace for the soul. Also this year, the artists immediately agreed to work outdoors. After the debut at the Festival, the shows went on tour: the challenge of working outdoor, and then indoor, was accepted by all the artists without any problems. Another important aspect is the prestigious international relevance of the Festival: this is also reflected in the multilingualism dimension of many shows, which had excellent results.

For the fifth consecutive year, Maestro Ruggero Cappuccio is the artistic director of the Festival. This conversation with him took place on 4th July 2021, at the Real Bosco di Capodimonte. Maria Pia Pagani: Could you explain the particularity, as location of the Festival, of the Real Bosco di Capodimonte?

Ruggero Cappuccio: Already a year ago, the Real Bosco di Capodimonte became the main location of the Festival, transforming itself into a “theatrical citadel”. To reach the Real Bosco di Capodimonte, you have to go up an uphill road, and this has both physical and spiritual value: in fact, walking this climb means creating a mood for the people, taking them to another dimension and with a different psychophysical concentration. This passage is also underlined by the door in our stages: naturally it is an open door because we are in an outdoor space, but the people must cross it to sit in their place. I wanted the concept of threshold, the crossing of a border space, to be present here as well to favor the welcoming dimension of the people and their disposition of mind to enjoy the show.

MPP: Are you satisfied with this edition of the Festival, which returns so many emotions after the pandemic?

RC: I can say that the Campania Teatro Festival is a miracle both in Southern Italy, and in the general context of the theatre festivals. Many historical festivals have been decimated or are in serious crisis, while the Campania Teatro Festival has conquered a national and international record. A strong point is in the involvement of tourists, who come to Naples from all over the world, and in the fact that it involves the new generations a lot also with workshops. The quality of the Festival is given by the quality of the artistic offer, by the exchange of opinions, by comparison, by meetings.

MPP: What positive aspects do you see in the theater after the pandemic?

RC: In my opinion, the pandemic was a magnifying glass of the strengths and weaknesses of the people, revealing positive and negative aspects. Despite the many difficulties that have existed, an artist must consider the pandemic as an opportunity, a challenge created by the emergency, an invitation to stimulate the creativity.

MPP: Do you think that the pandemic has created a revival of the outdoor theatre?

RC: I am very fascinated by outdoor locations. The Festival has always worked outdoors, in very suggestive locations such as the Belvedere di San Leucio in Caserta, the Natural Theater of Pietrelcina, Pompeii. To understand the effectiveness of an outdoor location, it is necessary to consider where an outdoor theater is located and with what care it is managed, which study on acoustics and the use of microphones is done. In the Real Bosco di Capodimonte, it was not easy to transform an immense forest into a “theatrical citadel”: we studied a lot the technical and acoustic problems, but it was a very stimulating challenge. Working outdoors means taking into account external noises, those generated by nature (e.g. wind, birds) and those that derive from man (e.g. car traffic, airplanes), but the theatre is stronger than these disturbances because it manages to absorb them with its spiritual power. Paradoxically, the audience of the New Millennium is fascinated by the disorder, have a much reduced ability to concentrate because the greatest distraction is given by the mobile phone, with which the people often have a relationship of addiction. Today, the biggest enemy of the theater is the mobile phone. The Festival also included a special project, related to the historical value of the Real Bosco di Capodimonte for the Bourbon dynasty: in fact, it was the most representative place of the Bourbon Age. The project was entitled The Royal Dream. The Bourbons of Naples (Il Sogno Reale. I Borbone di Napoli), and was a special initiative proposed by Ruggero Cappuccio and realized by Marco Perillo, that aims to involve the main Bourbon sites of the Campania Region emphasizing the cultural heritage through an artistic and historical digression on the century of the Bourbon Kingdom. The stage was at the Giardino dei Principi, with its enchanted trees: seven famous actors (Sonia Bergamasco, Alessandro Preziosi, Lina Sastri, Iaia Forte, Euridice Axen, Claudio Di Palma, Alessio Boni) offered a recital of seven different and unpublished stories, written by appreciated contemporary writers (Silvio Perrella, Wanda Marasco, Elisabetta Rasy, Emanuele Trevi, Pier Luigi Razzano, Marco Perillo, Viola Ardone). I had the precious opportunity to attend some debuts of the Festival, and remained admired by the extreme care of all the events. No detail was left to chance, the audience was accompanied to live an experience of high level – artistic and human. The rich program could satisfy the most varied requests, there was a great possibility of choice. The staff of the Festival worked flawlessly, offering an impeccable welcome service. The Campania Teatro Festival 2021 offered a memorable month of summer events to the audience, for the rebirth of the Theatre.