Review: “An Ideal Husband” At The Stratford Festival 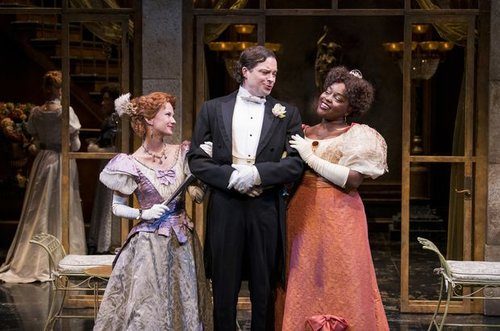 ‘Tis a puzzlement, these plays of Oscar Wilde. They require audiences to pay careful attention as it is easy to get lost in the intricate and, sometimes, silly plots. Considering the advent of #MeToo, I’m also wondering if Wilde’s plays of characters who withhold secrets and indiscretions still hold relevance for a twenty-first-century audience. I sat on the incompletion of this opening night review for a few days to ponder whether Stratford’s “comedy of manners” production of An Ideal Husband was a wise choice for the 2018 slate.

An Ideal Husband opens at the end of a very fashionable dinner party hosted by Sir Robert Chiltern and his wife, Lady Gertrude. The opening scene was quite enchanting with the introduction of Victorian England’s high society, upper-class snobbery. The ensemble members obviously are enjoying themselves here as they helped transport the audience back to an era of British class structure.

Sir Robert Chiltern (a commanding performance by Tim Campbell) is blackmailed by the conniving Mrs. Laura Cheveley (wickedly delicious work by Bahareh Yaraghi) for an indiscretion of a fraudulent money-making scheme years ago to build a canal in Argentina. Chiltern is concerned how this past historical choice will affect his faithful wife, Gertrude (lovely work by Sophia Walker who reveals an interesting performance range in the second act).  She believes that an “ideal” husband is someone who has no past actions, either in public or private, that will return to haunt either him or those whom he loves. Gertrude and Laura Cheveley knew each other as school girls who didn’t care for each other then, and don’t care for each other now.

Douglas Paraschuk’s set design is quite stunning upon initial entrance to the Avon Theatre. There is an elegant creation of a front hall with lush red tones in the drapery and walls. A grand staircase up right is partially hidden. Three grandiose entrances to the front hall are marked with three comfortable looking settees. Scene changes are fun to watch as members of the ensemble work in piecing together the other locales of Chiltern’s parlor room and the sitting room of Lord Goring.

Patrick Clark’s costume designs are most telling fabric creations of colorful textures and designs in the gowns of the women and the formal wear of the gentlemen.

Underneath this pretty and shiny veneer of Victorian England, director Lezlie Wade digs further into the context and subtext of Wilde’s play. The Director’s Note states,

“The making of ‘ideal’ men and women is as unrealistic as it is dangerous…while the past may be sufficiently buried, neither husband nor wife emerges unscarred.”

I’d like to add that no one remains unscarred in An Ideal Husband, and this fine cast captures this stark reality.

Even the dandy bachelor Lord Goring (a stylized performance by Brad Hodder, reminiscent of playwright Wilde himself) does not emerge unscarred as he is constantly harangued by his father, the Earl of Caversham (a witty Joseph Ziegler) on the reasons why he is not married. By the end of the play, Goring’s future marriage to Robert’s sister, Mabel (a delightful Zara Jestadt) will be closely monitored by Caversham and her brother too as they are still uncertain of the successful prospect of marriage. Even as a doting wife who forgives her husband of his business indiscretion, I noticed how Ms. Walker gave a momentary quick look of probable future mistrust to Mr. Campbell at the end of the play.

There is an underlying thread here of forgiving indiscretions which is seen differently within the contexts of #MeToo and An Ideal Husband. Was the play an appropriate choice in Stratford’s 2018 play selection? Yes, this cast is its insurance, but the forgiving of indiscretions is one that could be handled delicately in talkback post-performance opportunities between now and closing.  I hope these opportunities will exist.

The #MeToo context is a blunt reminder that sexual impropriety of any sort will not be tolerated. Victims of #MeToo will have to decide, in their own time, if they are able or can overlook and/or forgive horrible indiscretions thrust upon them. If there is forgiveness, what next? If there is no forgiveness, what next? Through sophisticated humor and wit of his context and time, Oscar Wilde believes that women should take the higher road and forgive men of past behaviors. That is not always the case and women, in the twenty-first-century context, do not always have to take the high road.

This article originally appeared in Onstage Blog on June 07, 2018, and has been reposted with permission. 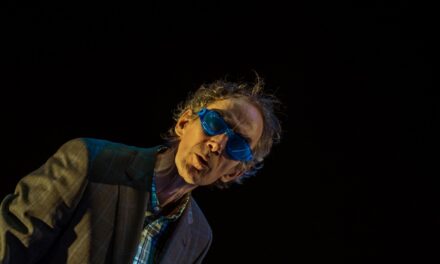 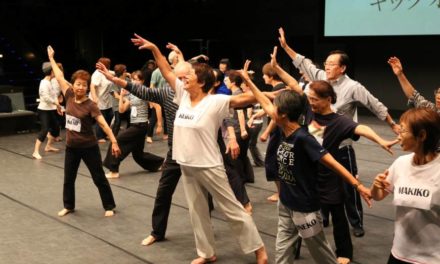