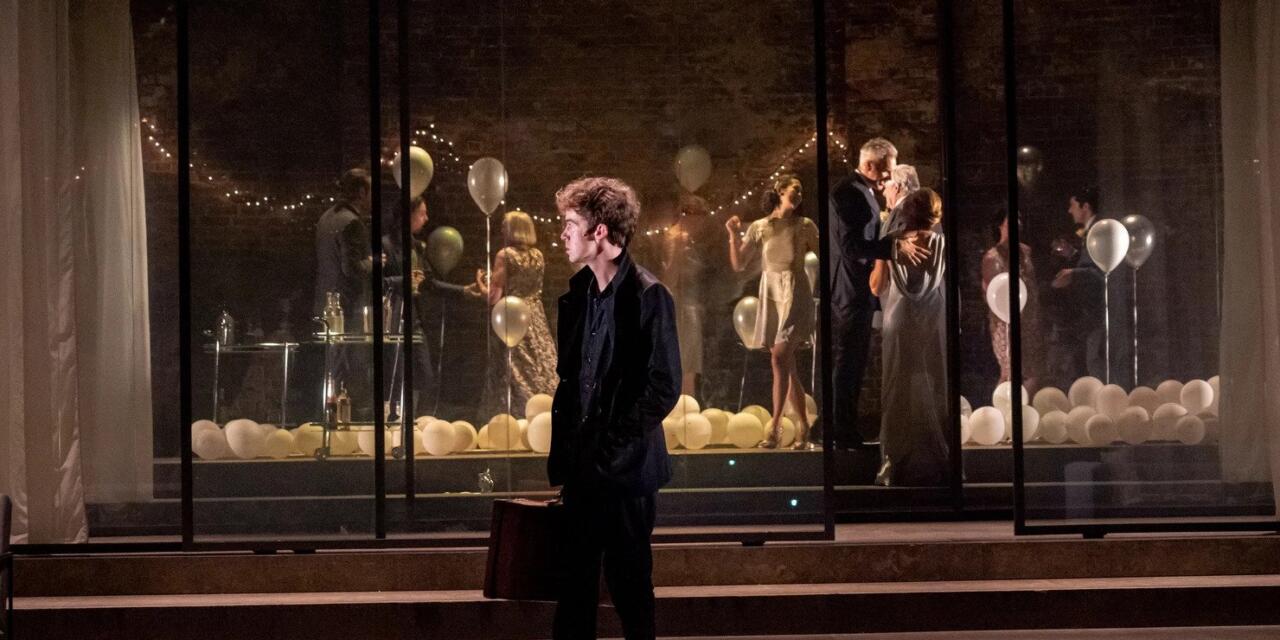 The first ten minutes of Robert Icke’s 3 ¾-hour Hamlet had me worried. Icke is a British directing star, known for contemporized takes on the classics, but the only other production of his I’ve seen was his busy and muddled adaptation of 1984 on Broadway in 2017. Like that show, his Hamlet kicks off with a sustained media rush: slickly produced newsreel footage of a Danish royal funeral, a virtual Ghost introduced on wall-size security-camera monitor feeds, a prolonged entrance by Hamlet underscored with canned Bob Dylan. Overcompensatory tech can be a flaming red flag; the panjandrums of prestige theater have worn out my patience over the years with their enormous expenditures on electronics that scream “I don’t really trust actors!” Happily, this was a false alarm. Icke’s Hamlet is actually grounded in a provocative, if flawed, interpretation and a wonderful acting performance by Alex Lawther in the title role.

Lawther’s Hamlet is conspicuously young. A scrawny and fragile 27-year-old who looks 18, he introduces his prince to us with a slow, slouchy, moping stage cross on the enormous modern-palace set at the Park Avenue Armory (design by Hildegard Bechtler). Lugging a heavy briefcase, he plops himself on the floor as Dylan’s “Spirit on the Water” wafts in from a cheery, balloon-strewn party in a glass room upstage—evidently Claudius and Gertrude’s wedding reception. Dylan music scores much of the show, of which more in a moment.

The wedding party, occurring a mere two months after the old king’s funeral, understandably leaves Hamlet disgusted, as does the advice by his mother and uncle to “cast thy nighted color off” and cut short his “unmanly grief.” He ends that scene in tears, underscoring not just their clueless insensitivity but also how freaky it is that neither of them is still grieving themselves. This Gertrude (Jennifer Ehle) and Claudius (Angus Wright) are as self-absorbed and hot for one another as teenagers.

The controlling force of Lawther’s is the profound, unresolved, acute grief he projects from start to finish. He and Icke have both spoken at length about the extensive reading they did on grief in preparing the show (see their interviews in The New Yorker and The New York Times), but even if you knew nothing about that you could feel the painful understanding behind Lawther’s portrayal. His Hamlet is a lonely, vulnerable, heartsick kid unable to move forward and trying out various tricks and strategies to get himself unstuck: antics, drama, surliness, sarcasm, anger, attachment to Ophelia, rejection of Ophelia. Nothing works, none of it lightens his gloom, and he ends up so locked in by his feelings that he can’t take pleasure in anyone or anything. Even his famous humor consistently falls flat, crushed by his repeatedly re-confirmed isolation.

Interestingly, Icke has cast Guildenstern as a sunny young woman, played by Tia Bannon, who behaves like a former college flame of Hamlet’s, arriving with her new boyfriend Rosencrantz (a chicly cool and resentful Calum Finlay). Hamlet is at first openly affectionate with Guildenstern and testy with Rosencrantz. But then the old flame proves just as untrustworthy as all his enemies, and you can feel his loneliness deepen. This is a gloomy and explicitly suicidal Hamlet, and it’s amazing that Lawther manages to lighten things in his soliloquies, which truly glow with mercurial intelligence and raw theatrical immediacy.

The major conceptual gambit of Icke’s production is its tricky suggestion that Claudius may not have killed his brother after all. Wright plays Claudius as a genial political animal who clearly considers himself legitimate, chosen by due process in an elective monarchy. The stage world is modern, with video, motor vehicles, wireless ear-pieces, and guns but, oddly, no cellphones. In this contemporary (or near-future) Denmark everyone readily accepts the authoritarian form of government even though all their clothes and mannerisms—as well as the Dylan music—carry the swagger and assertive individualism of present-day democracies. The youngsters’ skinny hipster pants and sexy short skirts (Bechtler also designed the costumes) betoken nothing more than the pseudo-youth-rebellion of consumerism, and the Dylan music comes off as pure nostalgia. No fascist surveillance state here because such repressive oversight isn’t needed. Wright may be a bit stiffly formal as Claudius but he carries no air of guilt or deviousness. We’re meant to believe Hamlet’s threatening actions force him to defend himself with violence.

In support of this, several key scenes are staged as though they’re figments of Hamlet’s imagination. The Ghost (David Rintoul), for example, first appears only in a grainy security-video seen by Horatio, the guards and then Hamlet. But when it’s time for him to speak with Hamlet, the Ghost suddenly appears in person in the guards’ room as the others magically vanish. When the Ghost leaves, the others instantly reappear, suggesting that the whole conversation about murder and revenge took place in Hamlet’s head. The Player King later on is also played by Rintoul, and when he arrives Hamlet registers shock at the resemblance.

In the scene when Hamlet overhears Claudius confess his crime while praying (“my offence is rank/ it smells to heaven/ it hath the primal eldest curse upon’t”), Hamlet, as always, declines to kill him because he doesn’t want to send him, newly shriven, to heaven. Lawther’s Hamlet trains a pistol point-blank at Claudius as he kneels, and you have the feeling his uncle knows he’s there. In the end, there’s a direct confrontation that isn’t in Shakespeare’s play. After Wright’s Claudius admits that his praying was ineffective (“my words fly up/ my thoughts remain below”), he looks Hamlet in the eye in defiance, as if to say, “Now do you dare shoot me?” Hamlet hesitates again and his uncle snickers and leaves, adding to the prince’s already immense self-loathing.

Clever as all this rearranging is, my feeling is that its yield is meager. Nothing much ever comes of Claudius’s supposed innocence, since he eventually turns on Hamlet anyway, and in thinking the new situation through we have to suppress any interest in important questions such as: why do the guards and Horatio also see the Ghost? Why did the royal marriage have to be so hasty? And what of Gertrude’s possible complicity? The alteration left me thinking that a guilty Claudius is simply more interesting than an innocent one because it activates more of Shakespeare’s text (even in Icke’s altered version) and makes a deeper character out of Claudius.

One script change of Icke’s I did find very interesting. Most Hamlet productions use some version of the very long First Folio text, judiciously cut. Icke uses First Folio material sprinkled with interpolated speeches from the First and Second Quartos, including one rarely used speech in which Horatio informs Gertrude of Claudius’s plan to have Hamlet killed. This news is deployed as a character pivot, providing Gertrude a reason to finally distance herself from her husband (which Ehle’s Gertrude has repeatedly refused to do, pointedly discounting Hamlet’s harangue in the closet scene). Ehle’s first reaction to this news is strangely non-plussed but we soon see that her character is indeed transformed, no longer bright but deadly somber. In the duel scene minutes later, she has a shocking coda, deliberately drinking the cup of poison even after Claudius clearly warns her away from it. The implication is that she is trying to thwart the poisoning of Hamlet by taking the draught herself.

There is much more to admire. Kirsty Rider’s Ophelia, for instance, has a tragic edge comparable to Lawther’s Hamlet. Ingenuous and amiable, she is also conspicuously young, going along to get along in the spying of the “get thee to a nunnery scene,” for instance, and thereby missing how much her choice hurts Hamlet. After he turns cold and her father is killed, Rider rises to her own portrayal of bottomless, heartrending grief in the mad scene, enumerating the many wounds and bruises on her arms and legs with the names of herbs and flowers. In such beautifully terrible moments, one forgets all irritations from other moments.

This article was first published by Jonathan Kalb on July 5, 2022, and has been reposted with permission. To read the original article, click here. 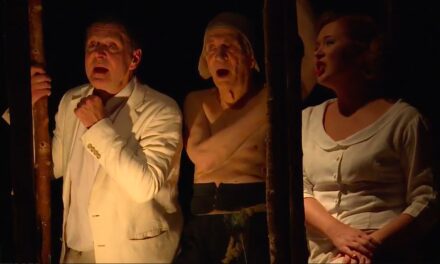