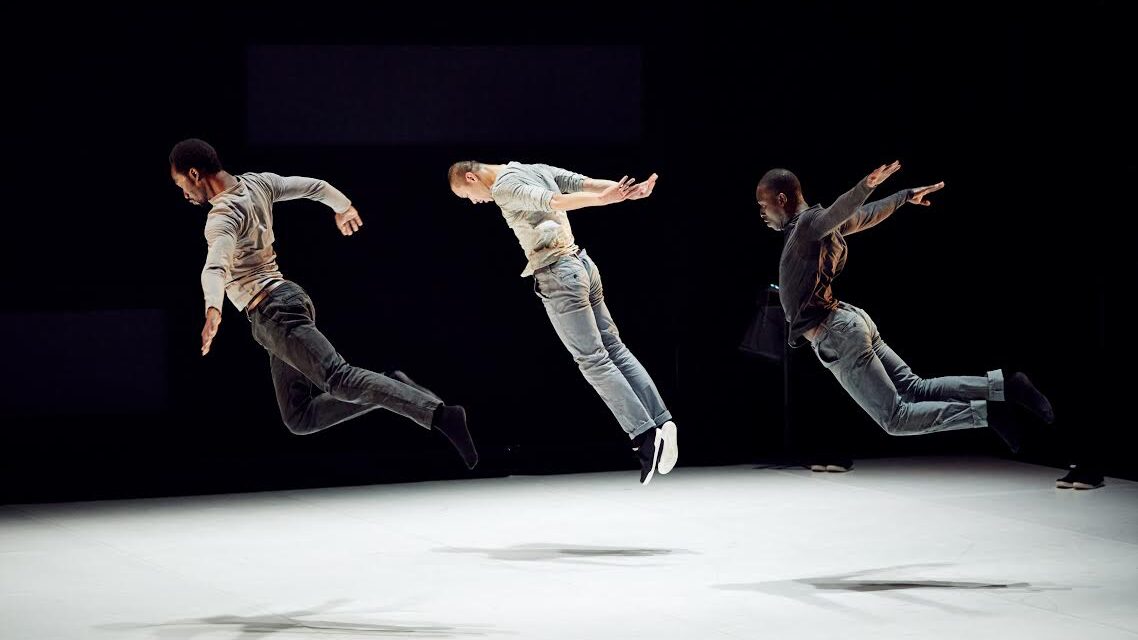 Within ten seconds, I am in love. Three men have taken off their shoes at the side of a white, open space, selected a music track from an iPad on a stand, smiled at each other, and stepped out on to the floor to dance. The three bodies seem to be moving as one single kinetic intelligence – covering the entire space, as at home on the floor as in the air, alternating between counterpoint and unison, picking up motifs from each other and developing them into intricate, elegant shapes and patterns. At one point they seem to be skating, one hand on each other’s shoulders. Several times throughout the piece they return to the same image, constructing a tree-like sculpture out of their bodies in the middle of the stage. During its final iteration the tree slowly contracts and falls, morphing into something else as the bodies, still connected, move through a sequence of images resembling war, nature, or the beginnings of life. 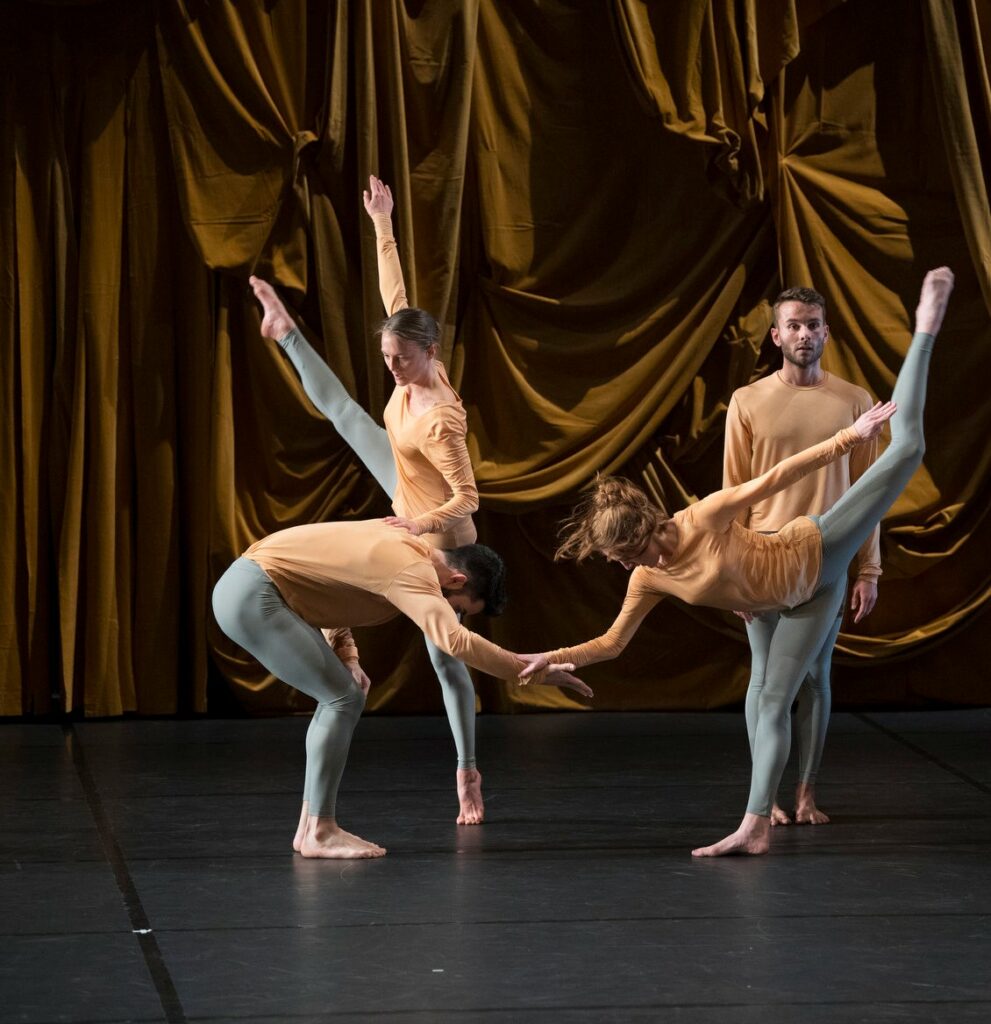 The piece is “Somewhere in the Middle of Infinity” by the French-Senegalese choreographer Amala Dianor, who is joined by his company dancers Pansum Kim and Ladji Koné. It is the first part of a triple bill celebrating the legacy, and 100 th birthday, of pioneering choreographer Merce Cunningham, whose first performances in London in 1964 were welcomed with an article in the Observer entitled “The Future Bursts In”. This evening’s program is shared between Dianor and the CCN – Ballet de Lorraine, one of the few companies in Europe entrusted with original Cunningham repertoire today. There is no explicit connection between Dianor’s piece and Cunningham’s oeuvre or choreographic language, but it works well here as an introduction to artist who has never performed in the UK before.

As the title suggests, the white empty stage evokes a sense of infinity but there are also abstract references to long journeys and migratory identities. Traces of the dancers’ places of origin (Senegal, Burkina Faso, South Korea) are visible in the choreography, which combines movement material from contemporary dance, Hip Hop, and African dance forms. Most striking is the dancers’ sense of togetherness and communication: Continually checking in with each other and with the audience, carefully negotiating, offering support and encouragement. There is eye contact, warmth, humanity, beauty, strength, depth, and humor. More than 45 minutes of pure dance can be challenging for an audience, but here every single one is a joy. If this is a vision of the future, we will be all right. 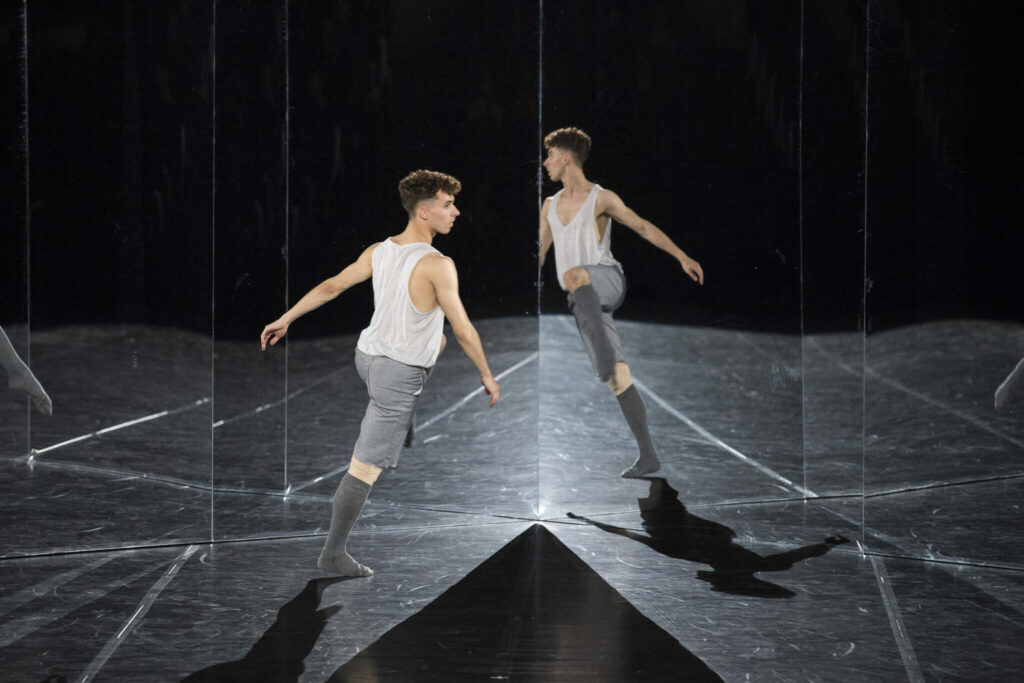 The second piece opens with a coup de théâtre: As the curtain rises, rows and rows of dancers stand facing each other – it seems at least sixty of them. But no. It is an optical illusion created by two mirrored walls meeting at a right angle in the middle of the stage. The space becomes a kaleidoscope as each dancer is seen from four different perspectives. “For Four Walls” was commissioned for the Cunningham centenary and uses John Cage’s original piano score for the lost early Cunningham work “Four Walls”, played live by Vanessa Wagner. The choreography is by Ballet de Lorraine’s artistic director Petter Jacobsson and Thomas Caley. It is set in a rehearsal studio, with the pianist sitting at a grand piano in the corner. Dancers sit or lie on the floor, watching their colleagues. They are costumed in shorts and socks, culottes, tops and belts that make them look fashionable in a vaguely 1940s sort of way. The beginning of the piece with its narcissistic gaze into the mirror, multiplied many times over, reminds me of Jerome Robbins’ classic “Afternoon of a Faun”.

Choreographically, however, the inspiration is clearly Merce Cunningham. There are
recognizable Cunningham-esque hops and tilts, straight leg lifts and travelling steps across the floor, full of speed and precision. A teeming mass of limbs in a small space. Towards the end of the piece, the wall of mirrors breaks open, giving more space to the large company which, up to now, has felt too big for the cramped stage. There is a mysterious scene in which the dancers stand behind the mirrors, singing a song, before returning for more urgent and tense dancing. In contrast to the first piece, there are no smiles and very little sense of connection.

As the final piece, ten Ballet de Lorraine dancers perform Cunningham’s classic 1975 work “Sounddance”, a party piece lasting just 17 minutes. The set is a huge, ridiculously draped, gold curtain. Dancers shoot out of the central opening like bullets, dressed in pale yellow and blue outfits. David Tudor’s electronic score, performed live by Etienne Caillet, rattles, chirps, coos and growls like a manic flock of robot pigeons. The choreography is fiendish and fast, combining ballet steps – pirouettes, tendus, and jetés – with rotations and deep tilts of the torso. Dancers ping around everywhere, using the space in an entirely un-balletic, non-hierarchic way. As suddenly as it started, it is all over as the last dancer catapults himself back through the hole in the curtain. The dancers are drenched with sweat. We in the audience are delighted, leaving enlivened and invigorated. 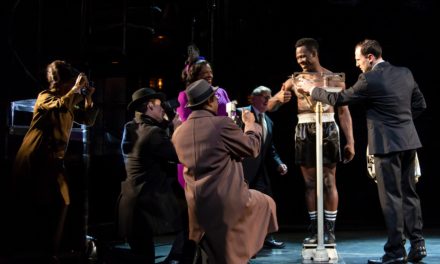