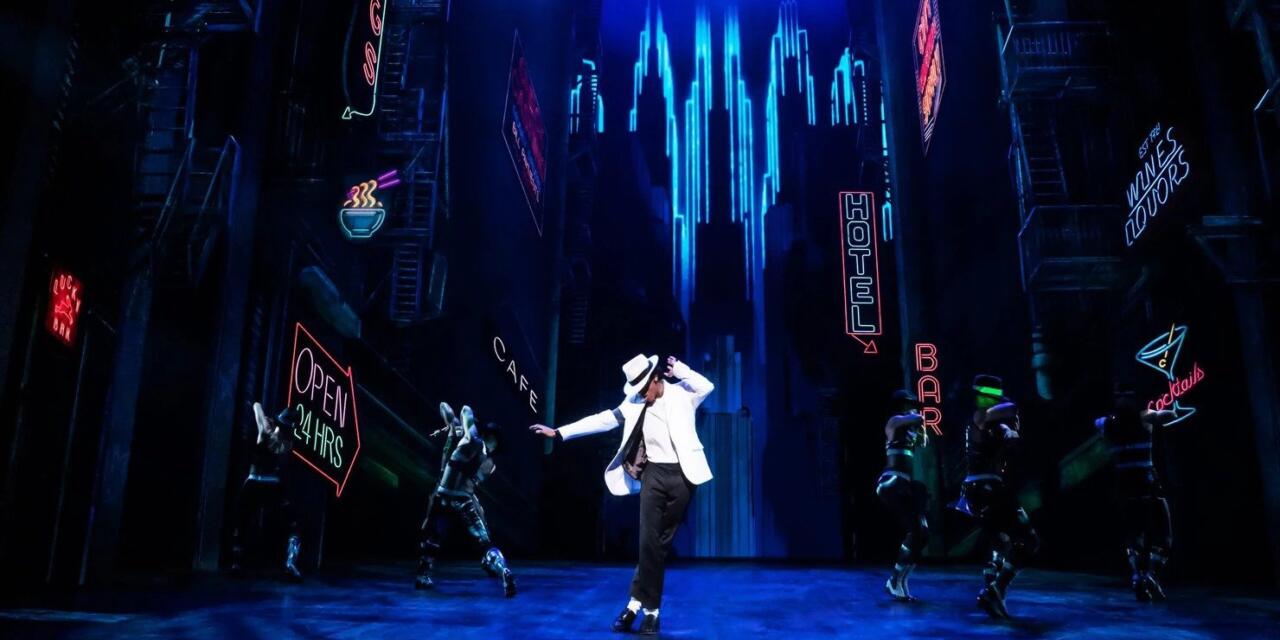 On the way to a play one day in early 2019, I climbed out of the subway at 8th Avenue and 44th St. and was stunned to see a massive, multi-story billboard with no writing on it, just a black-pen drawing of Michael Jackson striking one of his iconic dance poses in a plain, deep-red field. Billboards that size tend to cost in the six figures.

“Is that what I think it is?” I asked my theater friend.

“A teaser for the new Michael Jackson musical? Yes,” he answered.

What stumped me was why producers would shell out such serious money so soon after Dan Reed’s 4-hour HBO documentary Leaving Neverland dropped a bombshell of damning evidence of child abuse by Jackson, including extensive interviews with two grown men (Wade Robson and James Safechuck) describing detailed inappropriate boyhood encounters with the star. I’d read industry reports that the Jackson-musical project (then called Don’t Stop ‘Til You Get Enough) would be withdrawn, either for a thorough makeover or possibly cancellation.

“Maybe they rented the billboard before the dam burst?” I ventured.

“Or maybe they know something we don’t know,” replied my friend, more prescient than he understood.

The Jackson Estate went into overdrive in 2019 trying to rescue the star’s reputation. They denied all the allegations, maligned Robson and Safechuck, sued HBO, financed a counter-documentary, and seeded a public backlash that became racially tinged. How dare a white filmmaker and two white nobodies take down a beloved Black media idol whose rise to stardom meant overcoming entrenched racism in the music industry? Jackson’s music sales ended up increasing 10% that year, according to Billboard. The Estate dug in, determined to outshout, outspend and discredit all public voices friendly to the accusations.

With the musical back in development, I was cautiously impressed to learn that the playwright Lynn Nottage—an artist of proven conscience and moral substance—had decided to stay on as retitled MJ’s book writer despite a fan outcry against her for sympathizing with Robson and Safechuck. Furious Jackson fans had clamored for her to be fired because she’d said publicly she found them truthful. Michael Paulson’s interview with Nottage and the show’s eminent choreographer/director Christopher Wheeldon, published in The New York Times on April 23, 2019, suggested that they both strongly believed in contextualization rather than cancellation, as I do. They are worth quoting at length:

NOTTAGE We’re not journalists. Folks have to remember we’re theater artists that are examining the life of this very complicated artist. We can ask certain questions, but our job is not to answer those questions. My job is to reflect and interrogate and present.

WHEELDON And paint a balanced picture. Yes, lean into the complexities, lean into the darkness, but also recognize the great amount of music and film and choreography that Michael left behind.

Did the estate put any restrictions on what you could address?

NOTTAGE No, they absolutely didn’t. Up until this point they have not, and I don’t believe they will. Initially when we sat down to do this musical we really had a very honest conversation with the estate — that if we can’t tell this full story then perhaps we are not the right people to do it. They know who I am as a writer. I’m very deeply invested in approaching my work with honesty and integrity.

Some fans are calling for you to be fired.

NOTTAGE There will be people from every side who, no matter what we create, will condemn us, and we are prepared to enter into that very difficult space in order to make art.

The fan base is intense.

NOTTAGE I would ask that the fans be respectful to the process, and trust us as artists. And I do in some ways feel up to the challenge of telling this story, as scary as it is, because of the great divide that exists. But, in this day and age, I feel like if we as artists run away from complexity, then who are we?

Well, I don’t know if I count as a fan but I’ve been respectful to the process. I’ve waited eagerly all through the pandemic theater closure to see what this impressive creative duo would do to lean into those complexities. Yet now that I’ve seen MJ, I can report with deep discomfort that it studiously, even defiantly, avoids them. The show is a dazzling, three-hour exercise in ignoring the elephant in the room, never once referring to the child-abuse charges, or Jackson’s death at age 50 from drugs. It gently drops a few general insinuations (e.g. “What do you have to say about the recent allegations” and “there are a lot of strange stories making the rounds”) only to brush them off with equivocation and bluster (“You have no idea the hell this man is going through, do you?”). Far from a balanced picture, MJ paints a disturbingly sanitized one that amounts to extravagant reputation-laundering.

It should be said that the show is very entertaining. It features splendidly performed versions of 37 Jackson songs—each a powerful reminder of his remarkable presence in pop culture over four decades. The beauty, energy, innovation and, yes, the range and complexity, of his catalogue are on impressive display. Myles Frost, a Broadway newcomer playing the main Michael in his 30s (there are two others of younger ages), is a uniquely dynamic performer: a superb impersonator who thrills with the grace and accuracy of his dead-on vocals and dance moves, and also a comparably odd, can’t-look-away, chiseled-gamine physical type. Then there’s the dance. Wheeldon’s stunning choreography shrewdly expands on Jackson’s famous video and concert numbers and wisely emphasizes their theatrical roots in Fosse.

I’m more than willing to concede that Jackson was a great artist, possibly a genius. There’s no need to deny that in order to object to this musical. The problem is in its denials and erasures, its tacit pretense that Leaving Neverland never existed. Had Nottage written exactly the same evasive book for MJ in 2018, sanctifying the subject as she does and insisting that all that matters is the art (Michael: “Listen to my music, it answers any questions you might have”), I would’ve congratulated her and wished her joy on the way to the bank. Our current moment demanded something more—especially given the sustained assault on truth and factuality we’ve been living through in the larger culture.

Short of retooling this show entirely—making it, say, into a frank exploration of Jackson’s psychology and sexuality—the fitting and tasteful choice would have been to put MJ on hold. Let some time pass, enough for the child-abuse claims to settle on the public consciousness and take a place in Jackson’s posthumous profile that felt sufficiently debated. Imagine a worst case where the claims were eventually accepted as true by most people. I suspect that even then, a theatrical celebration of the Jackson song catalogue five or ten years down the road would have been welcomed without major outcry. That’s what dramaturgs are for: to write contextualizing program essays! To mount such a show now, however, just as the theater industry is emerging from long shutdown and reaching for truth about the worth and importance of its living, striving Black theater artists, amounts to unseemly. It comes off as a venal attempt to hide inconvenient truths and protect a lucrative brand at all costs.

More. Hearing the defiant call-outs and cheers from fans all around me at the Neil Simon Theatre for every vague boast and self-justification from Frost-as-Michael (“My goal is to love our planet, foster racial tolerance and global unity”; “I love being a Black man, it hurts when people say otherwise”; “There’s been some dark struggles…Things I can’t…”) I was reminded of nothing so much as a Trump rally. Post-factuality is a political strategy—a calculated effort to spin an alternative narrative based on deceptively framed or cherry-picked “alternative facts” and thereby galvanize a tribe around shared grievances and the glorification of a savior-hero. The savior-hero treats compulsory forgetting as a loyalty test. I’d love to believe that phenomenon is not what I was witnessing in the feverishly vocal MJ crowd, but it sure did feel that way.

This article was first published by Jonathan Kalb on Feb 5, 2022, and has been reposted with permission. To read the original article, click here.