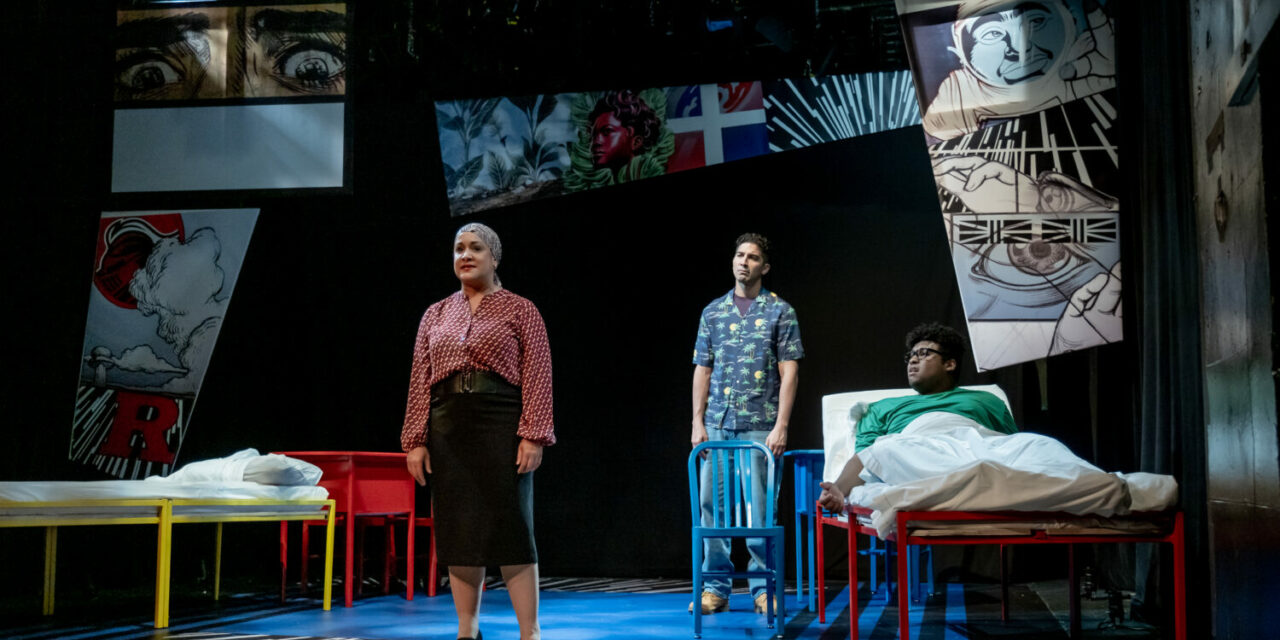 Repetorio Español, in New York’s Gramercy Park neighborhood, is currently home to a new stage adaptation of Junot Diaz’s Pulitzer Prize-winning novel The Brief Wondrous Life of Oscar Wao. The production, called La Breve y Maravillosa Vida de Oscar Wao is a glove fit for the justly venerated venue, with much to recommend it. The theatre, an evocative step into another country, features a gated courtyard and lovingly maintained vintage auditorium, replete with cozy balcony and welcoming staff.

The subtitles, formerly on the seatbacks, have been replaced with supertitles at the top of the stage. The stage is decorated with pop art graphics that conjure the story’s comic book motif and lights and sounds that evoke video games, themes that recur throughout the production. Marco Antonio Rodríguez not only directs but also adapted the novel for the stage.

Whenever a cherished work is dramatized, usually for the screen, one is inevitably faced with a sense of trepidation folded into their delight at experiencing a favorite work in a new medium. Diaz’s novel is a rich epic with literary allusions, Spanglish, and vestiges of magical realism, that nigh-exclusive provenance of the Latin artist. The story is a particularly New York City one, with its Dominican characters within commuting distance of NYC.

The scenic design features primary-colored beds, desks, and chairs whose main function is as dormitory furnishings that double as a hospital room, among other purposes. The graffiti-strewn upstage staircase and foyer are evocative settings for other pivotal locales. The vivid costumes efficiently delineate character without distracting from the action. The use of music is likewise effective and unobtrusive.

At the center is the cast, ideal in portraying characters that are at once pervasive and unique, from the domineering madre to the feisty big sister to the terminally lovelorn Oscar, the heart of the story. There is nary a false step in an evening neatly divided into two taut acts.

The novel seemed at times mournful in its poignant portrayal of a cursed teenage boy who wants only to write a great science fiction trilogy and find true love. The play, on the other hand, emphasizes the humor in the first act, the better to establish the innate comic underpinnings of, and connection between, characters who are alternately amusingly self-aware misfits (Oscar) and gleefully deluded players-in-training (his roommate Yunior.)

The mark of a successful adaptation is that you readily eschew comparison with the source material, easily suspend judgment, and enter the amusement park ride that is the dramatization of a literary work. This “Oscar” offers a wealth of visual and emotional riches and little opportunity for the pause to consider what was dispensed with in the service of condensing a 350-page novel into a two-hour play.

Woven into the play is the recurring theme of fukú, a curse that has apparently plagued Oscar’s family for generations, back before they emigrated from the Dominican Republic (DR) to the US. The play even manages the story’s transportation to the DR and mention of that country’s then-dictator, Rafael Trujillo.

Major work is by nature both site-specific and simultaneously universal and that is precisely what “Oscar” offers; a story about one particular Hispanic college student who is nonetheless relatable to anyone who’s ever been a socially awkward teenager and aspiring writer living in proximity to a major city.

“Oscar” is thankfully slated to remain in repertory for the next few months and should be seen far and wide, by Spanish speakers and subtitle readers alike. A read or reread of the novel is also recommended, for those yearning to spend more time with this quintessential hyphenated American family.