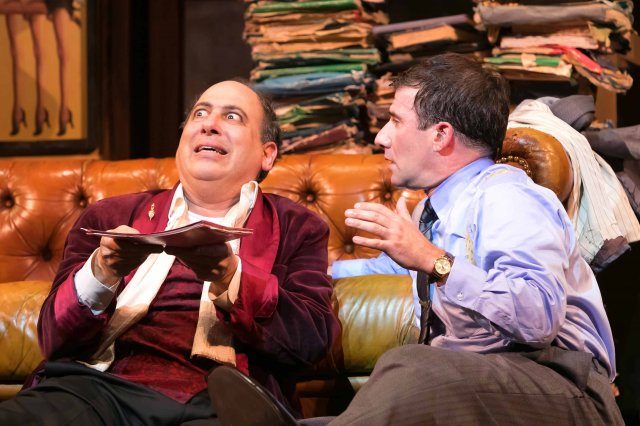 The Paper Mill Playhouse’s revival of Broadway hit The Producers received the 2016 Regional Theatre Tony Award, and the production’s close adherence to original form was likely a significant factor in the extension of acclaim. Fans may have a dual experience of delight in the re-visualizing of some iconic scenes while feeling nostalgia for the élan of Broadway leads Nathan Lane and Matthew Broderick. For new viewers, tones of relevance to the drama that is our current American presidential election will be clearly struck, complete with discordant notes that (despite acrobatic efforts at rationalization) can’t quite be justified as inoffensive.

The play follows a scheme dreamed up by a veteran Broadway producer, Max Bialystock (played by Michael Kostroff), and his partner-in-fraud, accountant and wanna-be producer Leo Bloom (played by David Josefsberg). The pair devises to assemble an intentionally horrendous flop production with plans to run off with the surplus funds, selecting “Springtime for Hitler” as their godawful golden goose. Certain that “Hitler” will fail immediately—gaudy, distasteful, abhorrent in every right—Bialystock and Bloom are flabbergasted as, through a sordid twist of audience interpretation, the production soars to success.

Brooks’ characters are as despicable as those featured in their play-within-a-play, and the broad strokes of satire seem to read as obvious. Unfortunately, a segment of audience response at the performance I attended would suggest a reaction to moments of cruelly-delivered humor at face-value, and the absent depth of satiric perception was eerily resonant to the lack of basic humanity being expressed by some in our political “reality.” The can-this-really-be-happening? effect portrayed with a signature flourish in The Producers hits home at this particular moment in time in a way that surely couldn’t have been anticipated at its inception in 1968. Perhaps the keen timing of its revival amidst this atmosphere of political absurdity was another key factor in Hoebee and Schmidt’s recent Tony recognition.

Performance-wise, musical number “Springtime for Hitler” remained the show-stopper, with a cleverly-imagined set design that made full use of optical illusion to hold up to the shock-factor of prior productions. The choreography set design and acting of the accountants in the song “I Wanna Be a Producer” were aesthetically delightful. To my experience, the most engaging, elevated in attention to detail, comical, and endearing performance was delivered by Mark Price as Carmen Ghia, the “common-law assistant” to director Roger de Bris (played by Kevin Pariseau).

Also of note was the vocal performance by Ashley Spencer, whose raw talent broke through the often distracting layers of derogation pervasively applied to the female characters of the play. The high quality of acting that’s become standard at the Paper Mill was upheld homogenously, although I see I am not alone among reviewers who were underwhelmed by this version of Kostroff’s Bialystock. His seventh time in the role, it perhaps supports the notion that having something to prove can come to one’s benefit.

A rich production full of material for a viewer of any given perspective to both cheer and object to, perhaps the most unanimously charged theme The Producers challenges us to confront is the over-the-top Nazi imagery. By presenting a Hitler-based character as a bumbling, flamboyant, kitsch comedic figure and oversaturating the stage with ridiculously ornamental Nazi symbols, the resulting effect is a layer of healing-through-ridicule, strange and counterintuitive as that sounds. We can only hope to one day reach a societal consensus of decency whereby the many other displays of oppression raised in The Producers won’t zing in present-tense. Until that time, the play’s revival is punctually appropriate for the strange political climate we find ourselves in, one which could easily be mistaken for absurdist theatre.

First published by The Atticus Review on October 24, 2016. Reposted with permission. 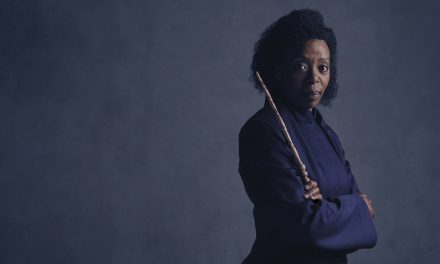