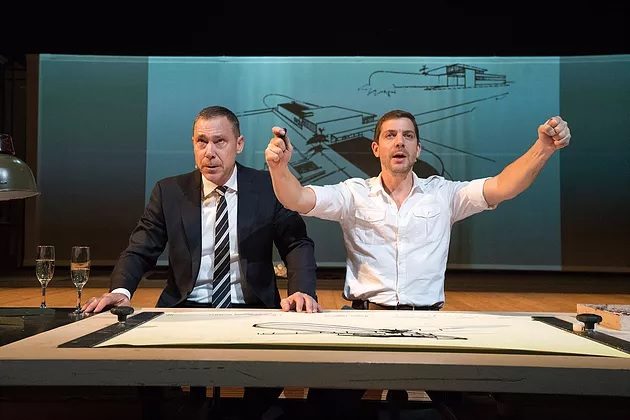 Toward the end of the fourth and final hour of Ivo van Hove’s interminable adaptation of Ayn Rand’s bloviated and adolescent-minded novel The Fountainhead (which recently visited BAM for five performances), I grew twitchy and restless and started looking around at some of my fellow audience members. Onstage, the winsome Dutch actor Ramsey Nasr, playing Rand’s starchitect-protagonist Howard Roark, was midway through his rousing climactic speech that justifies all his actions as heroic defenses of the individual threatened with ceaseless assaults by monstrous collectivism. This speech, a ridiculously implausible, self-aggrandizing, sensationalized monument to Whataboutism, was driving me insane.

We should all, Roark insists, forgive his recklessly irresponsible and wasteful act of dynamiting an affordable housing project simply because those who changed his design plans without his consent violated his sacred creative integrity. Furthermore, we should swoon before the irresistible sexiness of his quintessentially “independent mind” and forget that his love affair with Dominique Francon (Halina Reijn), the novel’s sole trite pseudo-concession to human feeling, began with a rape.

As all this was grossing me out just as much as it did when I read it at age 15, I looked around and saw three or four other patrons in what can only be described as unmistakable ecstasy. A rapt, gray-haired, potbellied man in his 60’s was leaning so far forward that the patron in front of him could probably feel him breathing down his back. A blonde woman in her 40’s was sniffling—sniffling! at Roark’s sinister warning about “a herd of brainless, soulless robots”—with both hands cupped on her cheeks. At the curtain call, these people and dozens of others lept to their feet, pounded their hands together, and shouted “Bravo!” until they were hoarse.

To all appearances, these folks were devoted Randies who had thrilled to a dramatization of one of their sacred texts by a director-adaptor with no evident critical relationship to it. Van Hove had indeed applied his whole, formidable inventory of slick, high-modernist stage tricks—large projections, use of hand-held mics, visible techies presiding over tables of blinking equipment, a sleek glass-and-metal environment by Jan Versweyveld—while presenting Rand’s story essentially straight, as if it was self-evident that her absurdly overwrought, convoluted, soap-operatic plot was gripping to everyone. To non-acolytes, that is laughably not the case, which made the show’s four-hour length a wannabe-epic conceit.

It really ought to be said that this production’s abdication of critical engagement raises Randian questions of selfishness and irresponsibility regarding the director, especially in light of the fact that his signature stylistic gestures were so generic this time. The show wasn’t merely tedious and disappointing but something more troubling than that. Van Hove is currently the most prominent and celebrated European star director working on the American stage, and he used his privileged position atop the high-culture pyramid in this case to deliver, in effect, a drowning gulp of unfiltered triumphal-capitalist propaganda to an American audience under vicious assault by kleptocratic billionaires posing as our political leaders.

What we need right now, I feel emboldened to say, is informed and engaged wisdom and guidance, not vacuous, nostalgic homage to a morally primitive teenage cult object.

I delighted in some of Van Hove’s early work in this country, but for a while now he has seemed to me the theatrical equivalent of a starchitect like Howard Roark himself. What bugs many thoughtful people about flashy and glamorous starchitecture is that the buildings often have nothing to do with their surroundings, having been primarily conceived as sculptural objects meant to boost their makers’ fame and prestige. Fun, original buildings are wonderful when they meaningfully serve the people and places around them, but not when they’re wasteful and irrelevant, ignoring all social, environmental and economic considerations beyond the designer’s fee.

Van Hove’s The Fountainhead is exactly this sort of decontextualized prestige-project. It tells a tale of ego, glamour, and repudiation of social duty through a theatrical language that heedlessly maximizes ego and glamour. That leaves you with the very uncomfortable impression that this director might be as willfully blinkered about the role of art in society as Ayn Rand was.

This post originally appeared on Jonathan Kalb on December 6, 2017, and has been reposted with permission.