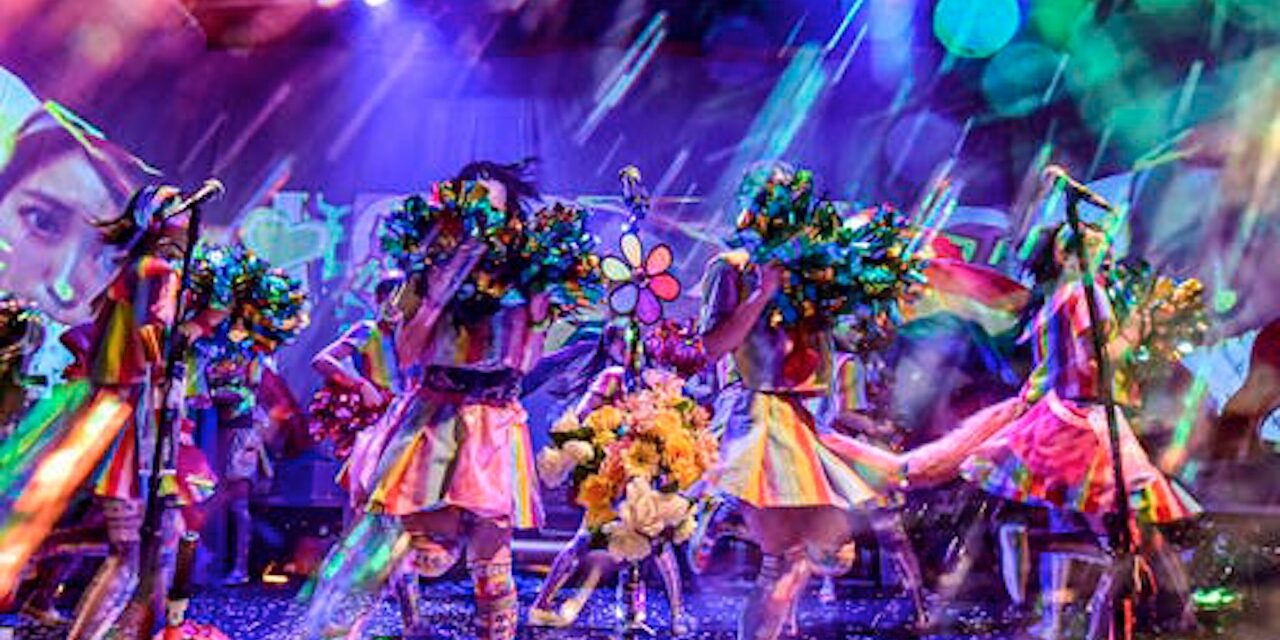 "Totes Adorbs ❤ Hurricane" is ‘a euphoric spectacle amid pop-culture icons and idols’. Photo courtesy of OzAsia.

In theatre, the play text tends to drive the storytelling. The interpretation of this text, known as dramaturgy, determines the artists’ approaches to dialogue, characterization, movement, set design, and other production elements. Dramaturgy’s purpose is to help the audience imagine a world on stage and to understand how this world works.

In some performances, however, the visual production elements – not the text – take the lead in creating the world on stage. This visual dramaturgy enables artists to present alternative narratives by stimulating the spectators’ emotional and physical engagement and by creating immersive experiences.

Visual dramaturgy has been part of Japanese performance culture for centuries. Its reliance on spectacle is responsible for the popularity of kabuki dance-drama, which many believe gave rise to fan culture in Japan. The close spectator-performer relationships in kabuki became possible through innovations in theatre architecture, especially the hanamichi, a rampway extending into the auditorium.

More recently, we can see the importance of visual storytelling in Japanese culture in manga, where emotional intensity and supernatural encounters are presented as something quite palpable. While western comics and graphic novels tend to favor dialogue-driven action, in manga, visual representations of characters and their emotional and physical states take center stage.

Read more: The deep influence of the A-bomb on anime and manga

Visual dramaturgy remains central for contemporary artists in Japan, as was thrillingly demonstrated through two key works at this year’s OzAsia festival

The Dark Master is Kuro Tanino’s stage adaptation of a manga of the same title. Presented by theatre group Niwa Gekidan Penino, it is set in Osaka at a small traditional eatery catering mostly to locals, who come to enjoy a delicious meal, read a newspaper or watch a baseball game over a beer.

The chef/owner (Susumu Ogata) is getting on in years. Though his desire to cook remains strong, his body is beginning to give up on him. At least, this is what he tells the 28-year-old Tokyo backpacker (Koichiro F.O. Pereira) who stumbles in one evening, hungry and in search of adventure. The Dark Master is a hyperreal, immersive experience. Photo courtesy of Takashi Horikawa/OzAsia.

The chef seizes the opportunity to recruit his replacement. So does the eatery: the front door locks by itself, thwarting the young man’s attempts to leave. The backpacker becomes the eatery’s new owner. The chef withdraws to the second floor, never to be seen again. However, for the next 33 days, he will give his apprentice cooking lessons via a minute earpiece planted in his ear. The arrangement is exhilarating and unnerving.

The audiences’ sensory engagement deepens when appetizing smells (the cooking on stage is real) mingle with live, multi-angle video projections showing the young man’s training. Through our own earpieces, we listen in on the chef’s covert cooking instructions, responding with gasps and laughter to comic blunder and culinary spectacle. Surtitles on separate screens provide translation.

Visual dramaturgy produces a hyperreal, immersive experience akin to becoming one with the young chef.

Delight in experiencing Totes Adorbs ♥ Hurricane, the latest work from Toko Nikaido’s Miss Revolutionary Idol Berserker, comes partly from sheer astonishment: did that angel just shoot me with a water rifle? Are they flinging around tofu and … seaweed?!

The performers’ frenzied dance numbers give a tantalizing nod to berserker warriors in Scandinavian mythology who would shape-shift to non-human form in the frenzy of battle.

We are all transformed into pop-culture berserkers. Totes Adorbs ♥ Hurricane is a ‘deliberate overload of color, lights, and glitter.’ Photo courtesy of OzAsia.

Performers and spectators alike are whirled into a shrine to partake in a euphoric spectacle amid pop-culture icons and idols: skeleton specters in the woodblock prints of Kuniyoshi Utagawaappear side by side with anime, video-game characters, and animoji. Digital projections flicker past continuously in a deliberate overload of color, lights, and glitter.

What appears on the surface as unruly indulgence conceals the careful choreography of dance sequences, songs, and the swift on-stage transformations – hengemono – associated with the best of visual dramaturgy in kabuki. Performers character-shift before our eyes, flinging discarded costumes into the audience. Also carefully choreographed is this audience: we are ingeniously drawn into the spectacle, transforming into the actors of our dreams.

The Dark Master and Totes Adorbs ♥ Hurricane reflect two disparate arms of contemporary Japanese performance: one of hyperreal theatre, and one of underground idol performance. Yet they both showcase the immense creative potential of visuals to create meaning on stage.

When visual dramaturgy leads, the spectators’ sensory and physical engagement cuts through performance conventions and helps us discover meaning in those in-between states and spaces, where experiences ring true even when language and logic fail.