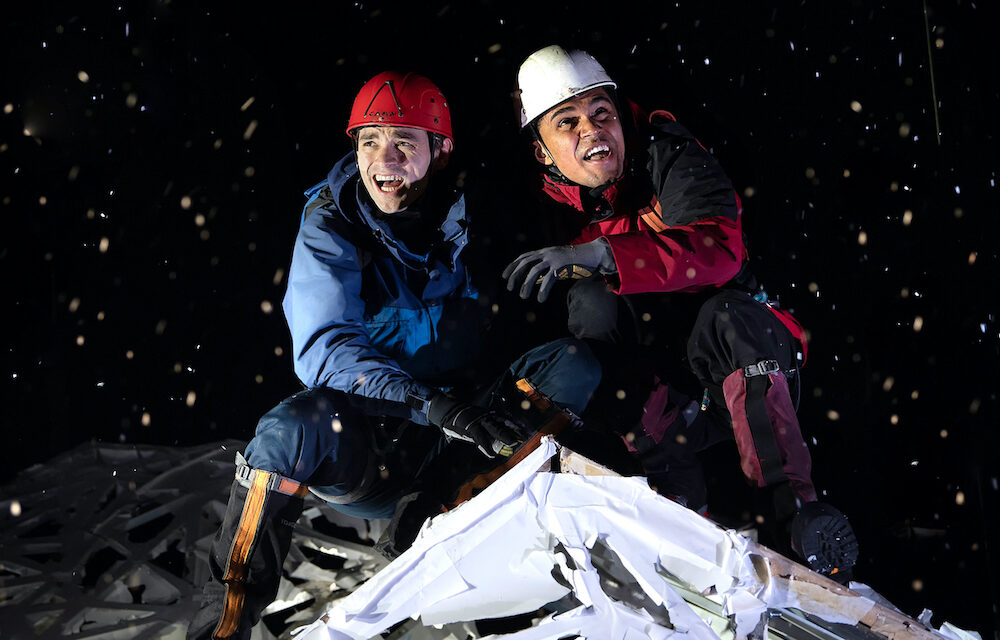 Angus Yellowlees and Josh Williams in "Touching the Void." Photo by Bill Knight.

Theatre can touch thousands of lives. But can it compete with the success of a bestselling book? First published in 1988, mountaineer Joe Simpson’s Touching the Void has apparently sold more than a million copies, and it’s been translated into some 20 languages. Not bad for a rock-climbing memoir. It tells the adventure story of how he, and Simon Yates, reached the Siula Grande peak in the Peruvian Andes in 1985. Last year, David Greig’s stage adaptation of the book opened at the Bristol Old Vic, and then went on tour. Now the much-praised show comes into the West End, and it’s an odd mix of the vertiginous and the banal.

Set both in various bars and on the Siula Grande, the true story has some nail-biting moments. Joe and Simon scale the mountain and reach the top, becoming the first climbers to do this via the west face of the summit. So far, so good. On the way down, however, Joe slips, plummets down and breaks his leg. Simon manages to reach him and then lowers him further down, but — in order to save himself — is forced to drop him into a crevasse. Since they cannot communicate, Simon assumes that his climbing partner is dead and gradually makes his way unwillingly back to base camp. Many feet below, Joe realizes that he has been abandoned and decides to crawl, yes crawl, to safety. It takes him three days.

This quintessential tale of survival against the odds is full of compelling detail. From the height of the mountain (more than 20,000 feet) to the length of time it takes for a body to fall down the slopes (18 seconds), this is a play about mountaineering for those who lose puff when they cross a molehill. Thankfully, Greig introduces a female character, Joe’s sister Sarah, who as a non-climber can guide us through this world of pickaxes, crampons and rope knots. So the first half — when she talks to Simon and Richard, a fictionalized hippie backpacker who joins Joe and Simon on the first leg of their climb — is a delight of humorous nerdism.

In the second half, understandably, the mood darkens. The fact that Joe crawls for days until he reaches base camp is a great testament to human endurance, but it doesn’t make very good theatre (especially in a West End venue with poor sightlines). There really is a limit to how many grunts, groans, and gasps you can listen to before you get sympathy fatigue. Although Greig enlists the help of a hallucination of Sarah to aid her brother, this section is dramatically inert. There’s also something irreducibly banal about male heroism and the whole idea of survival at all costs (none of which are actually specified). A play that treats Richard, a naïve and gawky youngster who wants to write, as a comic character while exalting Joe and Simon, real men with big backpacks, as heroes might feel very British (shades of Scott of the Antarctic), but it also seems a touch reactionary.

Of course, Greig, who is also artistic director of the Lyceum Theatre in Edinburgh, emphasizes humor as well as tension in his writing. And the production, which is directed by Tom Morris, head of the Bristol Old Vic, does have its moments of wonder. At the start, you can gasp while Sarah is made to demonstrate what climbing is all about by miraculously using a couple of wooden chairs and a table; then the first appearance of the mountain, designed by Ti Green, is pretty awesome; and some of the climbing sequences are tense and compelling, especially when accompanied by stories of past rock climbers. The idea of mountaineers as unsocial members of a distinct counter-culture is also very appealing.

In the program, Greig talks plainly and movingly about the human capacity to survive, how “When you think you can’t go on, you can.” He also points out that stories of survival simultaneously frighten us and make us feel safe. It is pretty scary to think of being alone on a freezing mountainside, crippled by frostbite and on the verge of death; but this story is safe because we are in a warm and cozy theatre, and we know that everything will be okay in the end. But just because you agree with Greig’s ideas about the inner strength of human beings in everyday situations doesn’t mean that you have to be blind to some of his adaptation’s less successful moments.

Since this story has already been filmed by Kevin Macdonald in a documentary with the same name, the stage version depends on its own down-to-earth theatrical vigor to appeal to the audience. Some bits are vertiginously brilliant; others look and feel like clumsy drama school exercises. Movement direction by Sasha Milavic Davies helps some scenes, and pulsating music by Jon Nicholls adds to the excitement, making it all very cinematic, while the chords of Joy Division’s “Love Will Tear Us Apart” are always a welcome sound, but the overall production is much too long, and some bits are too repetitive (do we really need to hear the joke about “avoiding the touch” twice?).

If the massive mountain itself is a character (with changeable moods and a distinct personality), and assuming that the metaphor of the void as implacable nature is reasonably thought-provoking, the brunt of the show is carried by the piece’s four actors. Josh Williams convincingly plays Joe the determined, while Angus Yellowlees gives Simon a good sense of survivor’s guilt. The moral choice of sacrificing your comrade in order to live comes across strongly. As Richard and Sarah, Patrick McNamee and Fiona Hampton are likewise good value. She plays Joe’s spirit guide and he provides some good laughs, although I could have done without the guitar strumming. As an affirmation of the human spirit, Touching the Void is great, but it doesn’t quite conquer the summit.

This article was originally posted at sierz.co.uk on November 14th, 2019 and has been reposted with permission. To read the original article, click here. 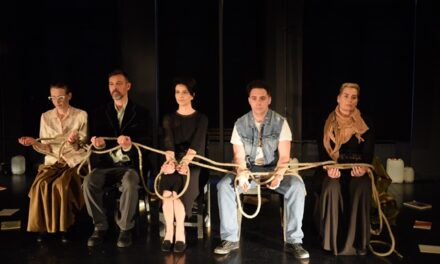