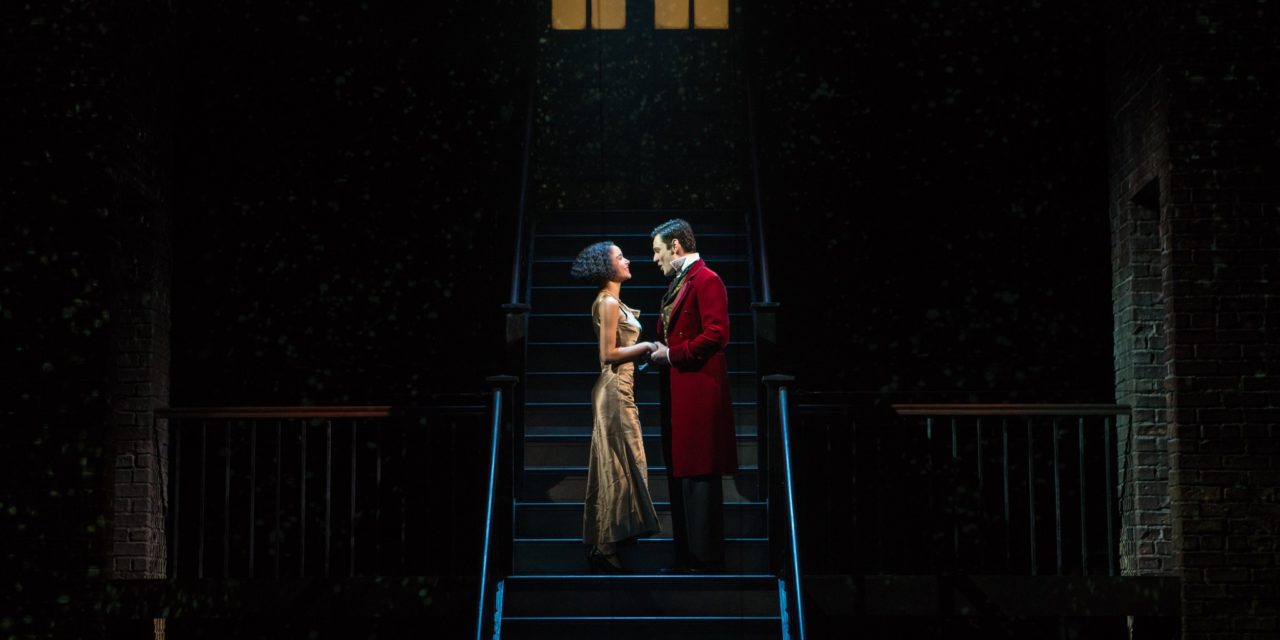 The explosively feminine theater of Adrienne Kennedy breaks many of the fundamental “rules” of drama, beginning with Aristotle’s assertion that tragedy is “the imitation of an action.” Kennedy’s plays are cradled by an exquisitely receptive intelligence; hers is a not a dramaturgy of action but of punishing passivity. Major works like Funnyhouse of a Negro (1964), Lesson in Dead Language (1970), A Movie Star Has to Star in Black and White (1976), and now He Brought Her Heart Back in a Box absorb and reflect received images, attitudes, and templates of violence. Kennedy’s characters are paralyzed, caught in the fact of irredeemable difference.

Kennedy is now eighty-six years old. He Brought Her Heart Back in a Box is her first new play in ten years, and her persistent preoccupation with the psychic ravages of racism and misogyny ought by now to have rendered her irrelevant. However, Donald Trump is the President of the United States. He Brought Her Heart Back in a Box takes place in Georgia in 1941, in New York, and in various theatrical fantasy spaces. It is, among other things, an epistolary play chronicling the doomed relationship between Kay, the haunted product of what would have then been referred to as miscegenation, and Christopher, the affluent scion of one of the architects of Jim Crow. Chris noticed Kay at the movies. Bitter Sweet, Noël Coward’s frothy, escapist operetta, was playing and the two teenagers were sitting in separate sections of the segregated theater. They meet in the wings of another theater, the one at their town’s boarding school for colored children where students are performing Marlowe’s The Massacre at Paris. This is an odd, but unfortunately apt choice for a school play. It focuses on the St. Bartholomew’s Day Massacre, the slaughter of thousands of French Huguenots by Catholics incensed by a royal interfaith marriage. Kennedy’s stage directions tell us that “The students do not try to make meaning of this play / it was assigned to them to perform… / their courses of study are carefully monitored by the / mayor’s committee.” Obscure recited passages from Marlowe’s text are added to Kennedy’s churning stew of cultural and emotional reference points. The young lovers fancy themselves on course to starring in their own cinematic romance, but they are bound for historical tragedy.

He Brought Her Heart Back in a Box cites and suggests intact narrative trajectories, but it proceeds by association and juxtaposition rather than linear storytelling. External factors conspire to divide Kay and Chris, but the ways in which they are each internally riven constitute the tender marrow of the play. Chris’s father, who was such an innovative and illustrious racist that representatives of the Third Reich sought him out for counsel on institutionalizing Aryan supremacy, is known to have sired three illegitimate children by three different local black women. He is spending his dotage supervising the tending of the colored cemetery. Kay’s mother died young and violently. Whether she shot herself or was stabbed to death by Kay’s white father is unclear. Kay unspools the various versions of this story that have insinuated themselves into her nightmares as Chris parses the confusing mixture of pride, shame, envy, and disgust he feels when contemplating his father’s legacy. Their attraction to one another is forbidden and all the more disturbing in that it conjures a chain of taboos already violated.

He Brought Her Heart Back in a Box is as richly surreal and imagistic as Kennedy’s finest early plays, but one might not know it from Evan Yionoulis’s stark production at Theatre for a New Audience. The production suits the shiny new Polonsky Shakespeare Center space, but the space doesn’t suit the play, which would be more at home in a theater with more memory, more ghosts, more modesty. Actors Juliana Canfield and Tom Pecinka are poised and pristine, but they are rarely permitted to interact or to delve into the uglier aspects of their characters’ pain. Projections of shadows and snow falling are overly literal without being clarifying, and the mise en scène is dominated by a steep staircase leading to a set of double doors, which acquires an inappropriate and ambiguous importance due to its prominent position on the stage. What waits behind those doors? Chris’s father dispensing punishment and charity from behind the desk in his corner office? Hitler? God? We are left to speculate until the play’s final moments when the newly married Kay and Chris begin an optimistic ascent only to be expressionistically gunned down and sent tumbling to their deaths. Apparently, then, the doors represent the couple’s “hopes and dreams.” Or something. Kennedy is America’s greatest living playwright, and He Brought Her Heart Back in a Box deserves to receive many more productions, each with their own approach to striking the proper balance between this work’s fragility and its fury. Yionoulis’s interpretation tends to smooth over the differences between the play’s many dissimilar textures. Another director might exaggerate them. Neither choice is necessarily better, and it is a testament to Kennedy’s genius that it is possible to imagine her dense poetry staged in a hundred different ways, none definitive.

Stairway to heaven aside, Kay and Chris are attempting to ascend; they dream of launching themselves into the ecstatically shallow realm of celluloid, where being young, beautiful, and in love is enough to build a life on. In the movies, scars are prosthetic, conflict is foreplay, and, crucially, everyone is white. This is what is most wrenchingly tragic about Kennedy’s plays; her characters find freedom only in passivity, in giving up, in watching from the shadows, wishing with all their might that things were otherwise. Feeling upstages fact in He Brought Her Heart Back in a Box. It is a knowingly ineffectual gesture. Poetic justice prevails where actual justice remains stubbornly elusive.

He Brought Her Heart Back in a Box

Theater for a New Audience