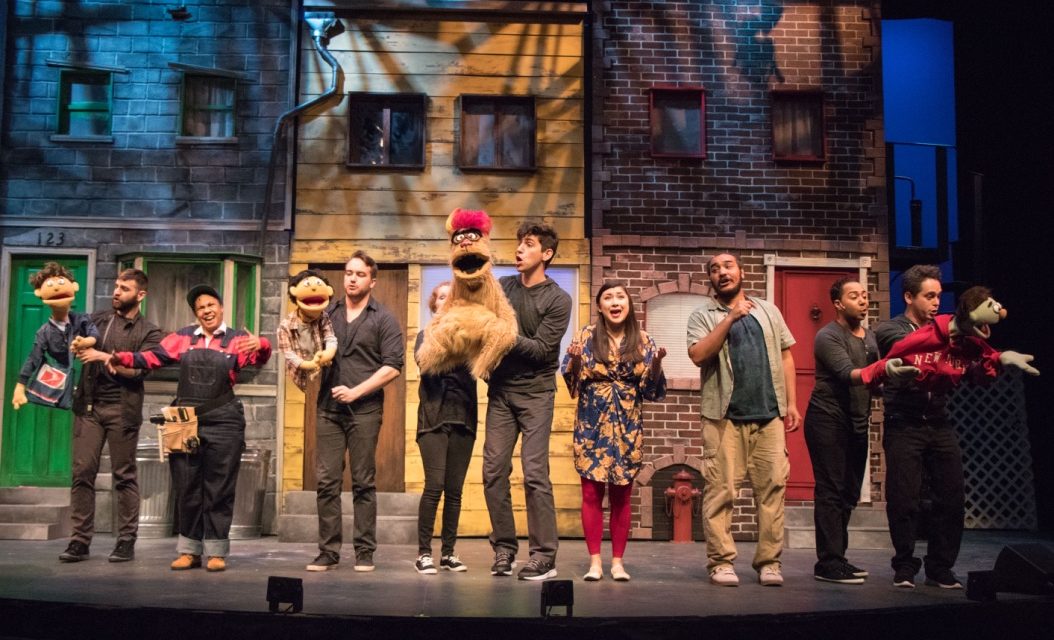 Memory lane took on the form of a shabby New York City block dubbed “Avenue Q” for theatre-goers this past Friday night at the Metropolis Performing Arts Centre in Arlington Heights. A blend of puppets and actors alike, its occupants range from a monster who consumes porn rather than cookies to former child star Gary Coleman, all learning lessons that descend upon adults in their early 20s and 30s. Reminiscent of that other famous Street where puppets live, this laugh-out-loud show explores the familiar theme of post-graduate malaise in an inventive way that is both nostalgic and hilariously incongruent. While veteran Metropolis director Lauren Rawitz did little to reconceive this Tony-award winning favorite, her production is thoughtfully cast and crewed and plays to the theatre’s strengths remarkably well. Despite minor technical oversights and a few cast members who might not be as strong as their peers, this production is a faithful rendition that is well-worth seeing.

The third show of the 2017-2018 Main Stage Subscription Series, Avenue Q was the perfect choice for this small theatre in the northwest suburbs. Following the French farce Boeing Boeing and preceding the decade revue Beehive: The 60’s Musical, Avenue Q fits well with Metropolis’ commitment to bringing first-class entertainment to audiences outside the city–and on a budget. Metropolis Executive Joe Keefe and the rest of the development team know their audience well and, more importantly, know when to push the boundaries and trust them with something edgy. The company played to a full house on Friday night and the audience was very responsive. While some of the crowd might have been far removed from their 20s, they laughed just as hard at the arrival of characters like “Lucy the Slut” and “Mrs. Thistletwat,” proving that everyone was on board and in for the ride. 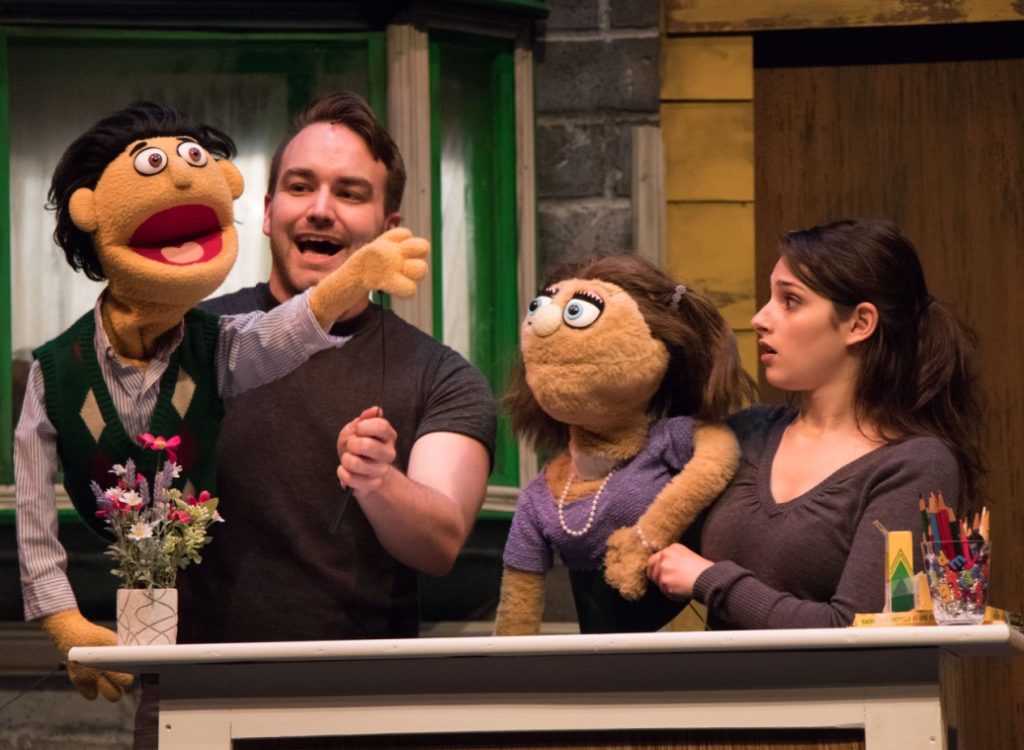 In addition to choosing shows that make a well-rounded season, Metropolis is committed to diversity and inclusion in both its casting and its crewing. With over half of its cast being people of color, the inclusion of a non-binary actor understudying for a traditionally female role, and over half of its production staff being women, this theatre is progressing in the right direction when it comes to listening to voices off the stage and representing voices on it. The key roles of director, music director, choreographer, and stage manager are all filled by women and the production was all the better for it. This staff and cast prove that a show like Avenue Q can be every bit as crass, heartwarming, and ridiculous with talented artists of all backgrounds at the helm.

Scenic designer Robert Pinta transformed the intimate space into the charming Avenue Q, complete with a street sign and bras hanging from a clothing line. The whimsy nature of the show gave leeway for the realism of the set, making homemade beds and a cartoonish Empire State Building completely permissible and even a welcome addition to the do-it-yourself, youthful spirit of the production. Rawitz made great use of the space, utilizing a side entrance with a railing for Princeton’s (Alex Newkirk) entrance and Lucy’s (Michelle Tibble) sexy showstopper Special in addition to the aisles on many occasions. The pit orchestra was nowhere to be seen, once again the most tragically overlooked yet integral unsung heroes of the stage musical. 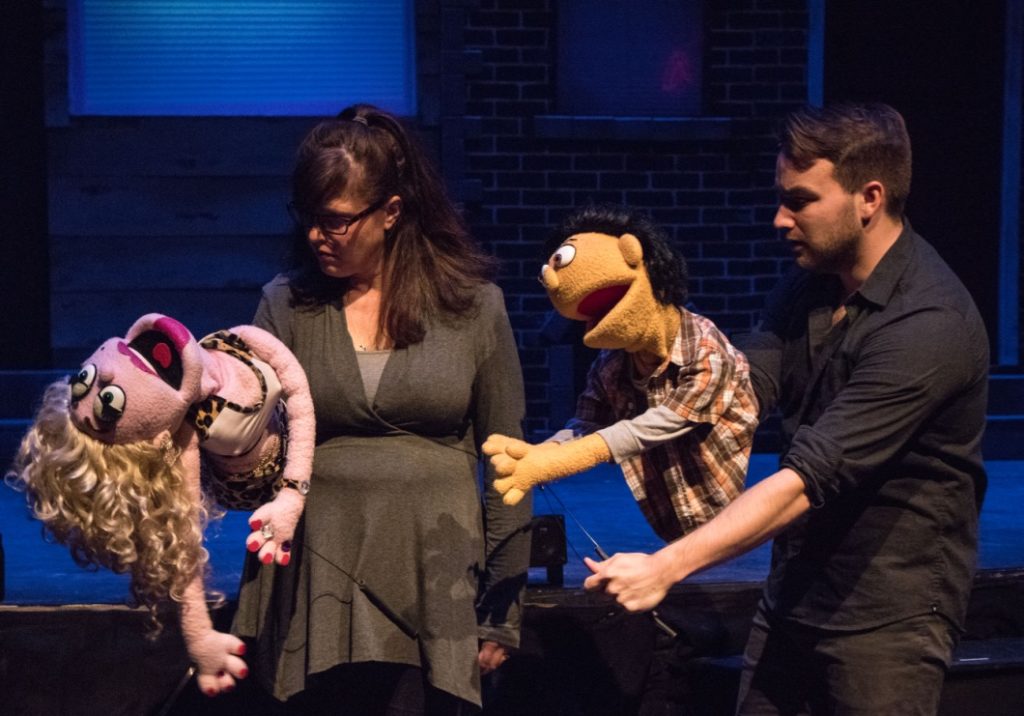 The heart of this production, however, is its actors. Every bit as youthful and Bohemian as the characters they portray, these fresh-faced artists are bona fide talents–with a knack for puppetry. Stars Alex Newkirk and Emilie Rose Danno shone as the leads Princeton and Kate Monster, respectively. Both were remarkably adept at maintaining a healthy and resonant tone despite the hindrance of an affected cartoonish voice, which they committed to thoroughly throughout the show. Unfortunately, a technical oversight with the sound mix of microphone levels upset the balance of the ensemble numbers and often slighted the orchestra, weakening numbers such as Fantasies Come True and The Money Song in a way even the strongest vocalists could not weather. However, this did not take away from the delightful performances by so many of these talented young actors. 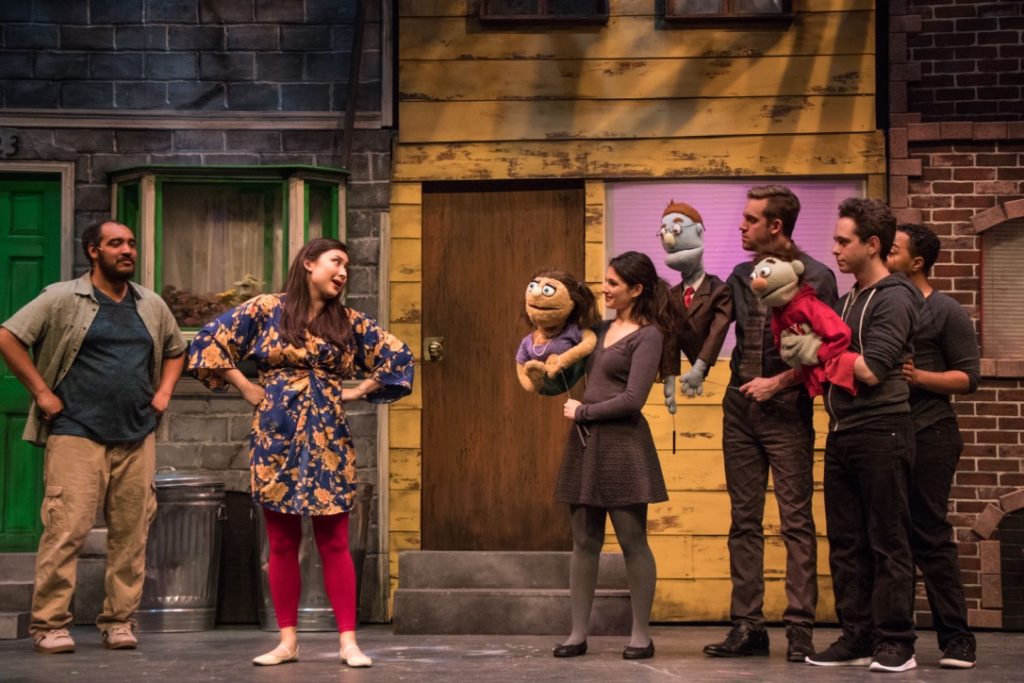 However, it was those who did not have to hide behind the puppet who appeared to struggle the most; the humans residing on Avenue Q were the weaker members of the company. Jordan DeBose and Emily Bailey, who play newlyweds Brian and Christmas Eve, respectively, felt especially awkward interacting with their furry costars. With a closed tone and a limited register, DeBose relied on his comedic flair to portray the struggling comic but ended up needing to fight to win the audience over just as much as his character. Bailey gave a glimpse of her beautifully robust operatic register in her ballad The More You Ruv Someone but disappointed with her upper belt where most of her singing resided. Her delivery was altogether too sincere and uncomfortable and would have played better with a lighter energy. Despite a few pitchy moments in Schadenfreude and You Can Be As Loud As The Hell You Want, Aziza Macklin (Gary Coleman) had a more grounded stage presence and fared much better when interacting with the puppets.

The show’s most triumphant moment occurred in the final number For Now as the company sang about how everything in life is only temporary, replacing the contemporaneous “George Bush is only for now” lyric with “Trump” and garnering the most applause of the night. Metropolis’ production of this beloved Broadway hit is faithful to the original, with a spectacular collection of artists at its helm. Avenue Q plays until June 30th and is well worth the visit to downtown Arlington Heights–just leave the kids at home! 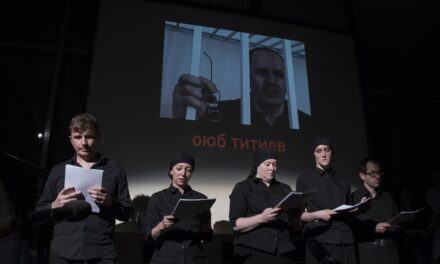