Picture a green landscape, arranged with villages and cottages, farms and reservoirs. Behind, the breathtaking view of Snowdonia National Park in the distance, all bearing up as a forefront to the sight of a nuclear power station as its backdrop.

“…It’s not us who has a hold over the land, it’s the land that has a hold on us…”‘ This is the most striking line in Hollti, a play rooted in the land, in the folklore, the spirit of community and its history. All are eclipsed by an approaching alien force – the ‘New Wylfa’ power station. To some, it’s the beginning of an unwelcome change. To others, it’s the promise of jobs, revenue and in the words of one character in the play ‘a more diverse community.’ Either way, nuclear energy is having a significant impact on the isle of Anglesey in North Wales.

Hollti (which in Welsh means ‘split’) marks the second verbatim play from Theatr Genedlaethol Cymru, following their production of Sgint. Theatr Gen (as they are also known) established themselves in 2003 as the core national theatre for the Welsh-language. Since then, under the artistic directorship of Arwel Gruffydd, their work has reached groundbreaking new levels for theatre in Wales, including the first live-cinema broadcast from a castle in the South Wales valley (Macbeth, dir. Arwel Gruffydd, 2017).

The play roots itself on the Northern Isle of Anglesey (or Ynys Môn as it’s known to its native Welsh-speakers) where the residents contemplate and debate over the construction of New Wylfa, a British-Japanese based nuclear power station with a projected opening year of 2026. This isn’t the first power station on the island, the first being built in 1971 and decommissioned in 2015. But since the proposal for a second, debate has unfolded between the boom of ‘local work for local people’ (as described by one of the residents), the crisis for energy in a increasing population and the raping of land from generational farmers.

Through extensive interviews with residents of the island, dramatist Manon Wyn Williams has carefully structured those voices into a relevant and exciting drama regarding the nature of industry existing amongst the community. The play invites the voices of the very neighborhoods that New Wylfa will be treading on as well as representatives of ‘The Horizon’ (the energy suppliers and investors), the young, unemployed, farmers, teachers and plain simple thinkers. Through them, we’re offered a balanced argument.

Of course, arguments both for and against the use of nuclear energy are strong subjects. The play exists in a cancerous world built on a very real and significant fear after the wake of Chernobyl and Fukushima. There are those will see the economic benefit for the island, resulting in a boom for the tourist industry by supplying accommodation for workers and more importantly, the work in will bring to the unemployed.

This perhaps unfolds what I think is the most important element of the play – purpose. One character stipulates that much of the unemployment and lack of education is due to ‘the lack of purpose in people’s lives.’ Yes, this argument is wholly valid. The construction of the site will bring about a dramatic change in the lives of the island’s inhabitants. Whether directly or indirectly, the previous Wylfa and the New Wylfa will bring about the question of purpose in each and every individual.

But is it worth the risk of toxic injection into the land? Where are the renewable energy sources for the island? Who claims responsibility for their land?

It’s this idea of purpose that allows the play to be relevant to any audience, no matter the language they speak. As part of their commitment to this, ‘Theatr Gen’ have welcomed ‘Sibrwd,’ a downloadable app for mobile devices that offers an English precise in both textual and audio format throughout the play. Having sat in the rehearsal room with the integration of ‘Sibrwd,’ I can safely say it is an integral part of the creative process in ensuring that audiences of any language are offered an equal experience of the play without fear of a language barrier.

It’s probably easier to say this to those nonbelievers; Welsh language theatre is wholly accessible outside its speakers. This is a production relevant to the masses. The purpose is important to each and every one of us, but we should all give voice in the debate of community over an industry.

The New Wylfa construction remains a controversial subject and one that sparks intense debate. In Hollti, audiences are offered a sensual journey through a land torn over the prospect of an exciting, if not frightening change.

Hollti opens at the National Eisteddfod in Boderden, Anglesey on the 8th August and runs to the 11th, prior to a national tour in October. 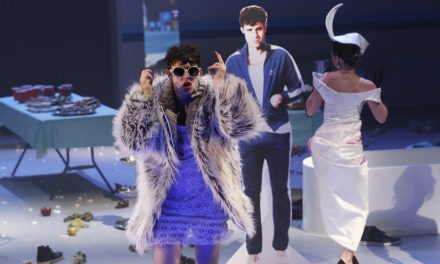 In Conversation With Simon Stephens About Teaching Playwriting – Part 1 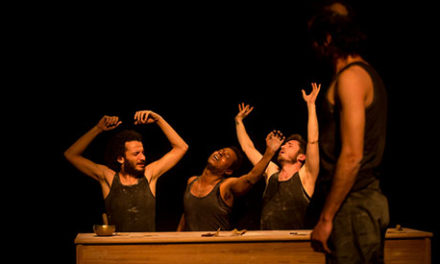