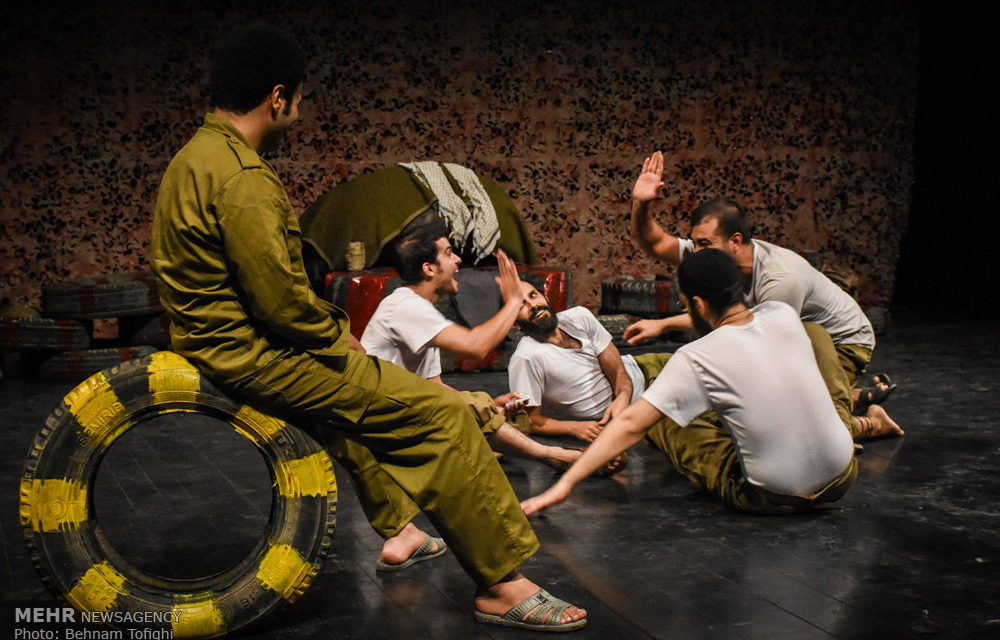 "The Whispers Behind the Battle Line," written by Alirezā Nāderi. Photo Behnam Tofighi

The Whispers Behind the Battle Line, a tragicomedy by Ali Reza Naderi and directed by Mohammad Reza Sattari, revolves around dialogue. Six soldiers, the Sergeant, and the Commander are resting in a cease-fire during the Iran–Iraq War. The play begins as the soldiers are playing soccer. Soccer could be regarded as a symbol for the verbal game taking place between the people in the course of the performance and for the bloody game of war. The soccer game is innocent and lighthearted and stands in sharp opposition to the grimy and cruel war.

Except for a few incidents, nothing significant happens in the physical world; dialogue and inner thoughts and feelings develop the plot. The playwright has selected characters from different political, social and religious backgrounds to create a large variety of viewpoints. Bagher is an analytical-minded leftist; Doust‘ali, uneducated and religious; Moosa, Jewish and meek; Alireza and Parviz seek fun and carnal pleasures; and Shahriar seems to be a romantic and naïve boy.

The dialogue and interactions are generally funny and humorous, but there is a shadow of apprehension, doubt, and sorrow over them. The characters not only challenge each other’s political and religious ideals but also question their own. Most have joined the war to defend the Revolution’s ideals; even so, they’re worried that after the war ends and they return home their values will be forgotten and replaced by anti-values.

The acting is repeatedly interrupted by the sound of stones being thrown toward the trench. Everybody wants to know who throws the stones and why. The sound of stone-throwing makes them think it might be a sign of an approaching attack and a reminder that the truce is, in fact, a moment of peace before the storm. This strange sound is heard repeatedly, like a mysterious motif, throughout the play.

In choosing the truce as a dramatic situation, Alireza Naderi, the playwright, has made a smart move. The cease-fire is an intermediate state between war and peace, an uncertain situation which creates much dramatic attraction and suspense. The limbo outside parallels the limbo inside the minds of the soldiers, created by their doubtful approach to war. Bagher says: “I’m afraid to go back home, and see there is no freedom and justice there.” And somewhere else: “I wish war had happened when I was not born yet or were just a little kid.” Ali Reza says: “I’m afraid that I die and people forget about us and draw a ridiculous mustache over our lips in pictures.” They wonder whether the people they’re fighting for are worth the sacrifice.

The acting is plausible and dynamic; thus, the audience gradually identifies with the characters. All the characters undergo some dramatic change in the way they perceive the war, or show a surprising aspect of their personality hitherto unknown to the audience. Ali Reza, who seems a happy-go-lucky guy, after taking cocaine confesses to his fears, doubts, and sadness, and turns out to be the most conscious member of the group, the culprit who throws stones to somehow awaken the minds of his comrades and to make them review why they have joined in the war. Shahriar, the simple-minded and romantic guy, is later discovered to be educated and exceptionally intelligent; Bagher reveals his doubts about his radical leftist theories and his regret for having the tragic destiny of a war soldier. But it’s too late for any revisions; in the end, the truce is violated and all the innocent soldiers except Parviz are killed in the following attack.

Sattari, the director, while staying loyal to the original structure of Naderi’s work, has inserted a few effectively creative scenes throughout the play. One example is playing the sound of two cellphone conversations from backstage at the beginning and end of the performance. These two parts are set in the future—the war between Iran and Iraq was from 1980–1988, when there were no cell phones—at a time when the soldiers, except for Parviz, are martyrs of the finished war. These scenes lead us to the discovery that the whole play may have been a flashback in the mind of Parviz, who is now tortured by the memory of his late friends.

Another instance of Sattari’s innovation is the shocking scene of Alireza’s nightmare, in which he sees his comrades standing upstage in the dark, holding torches, which are extinguished one by one.

The set is simple and practical, consisting of several tires piled around the stage in the way that sandbags are stacked in trenches. These tires, which remain unused and motionless instead of moving cars, could symbolize the motionlessness of the cease-fire, which makes the soldiers pause and think about the bitter situation they’re trapped in.

The director succeeds in creating controlled and effective humor which is combined consistently with the tragic and more serious scenes. After each episode of laughter, a painful shock awaits the audience.

Short musical excerpts accompany the tragic and serious scenes, although I believe the characters’ words and performance are enough to create the desired emotional effect. Effective lighting is another strength of the play, depicting the suspenseful and indeterminate atmosphere of the cease-fire.

Powerful text, masterful and creative directing, believable and fluent acting, the right decoration and lighting help The Whispers Behind the Battle Line turn to “screams” which cry out fundamental questions about the meaning of war; questions that are alive and well in the minds of the Iranian public.