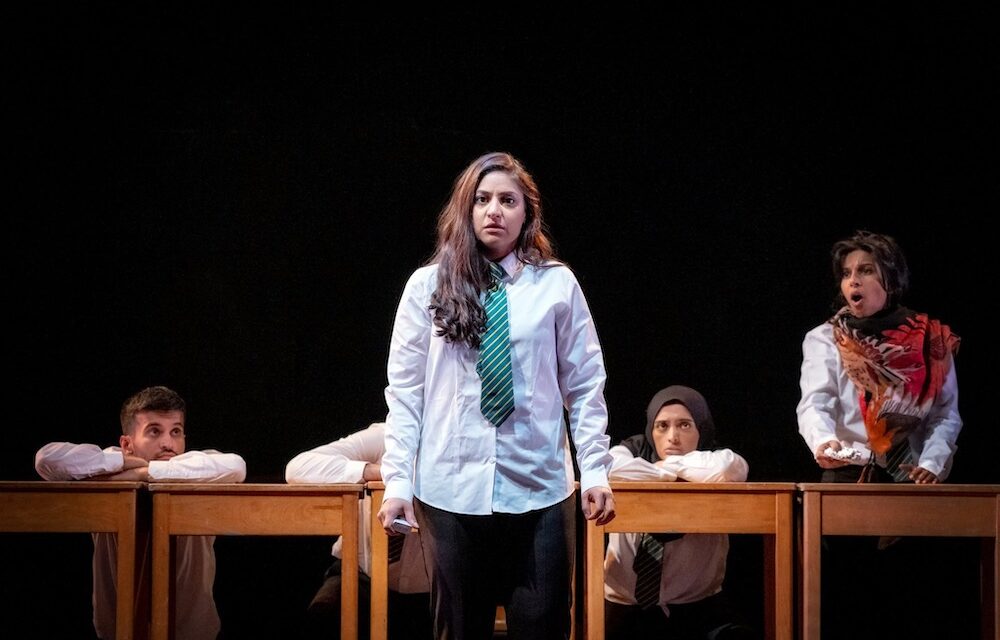 Media hysteria needs good branding. So when in March 2014 an email letter was leaked to the press, claiming to be by Islamist extremists and detailing how to take control of several Birmingham schools, it was boosted by the fact that the email was headed “Trojan Horse.” In LUNG theatre company’s straightforward and moving account of the scandal, a campaigning play which premiered with the different cast at the Edinburgh Festival last year, the events that happened in Park View School are told in the words of a handful of participants — teachers, pupils, governors, local politicians, officials, and bureaucrats. The result is a short, but compelling, piece of engaged political theatre.

Although the Trojan Horse letter, which contained a five-step recipe for Islamists to take over local schools in Birmingham, was soon revealed to be a fake, the national right-wing press took up the case and demanded action. As a result, Tahir Alam, chair of the school trust, was dismissed and other teachers suspended. The flames of media hysteria were fanned by Michael Gove, then education secretary, who was determined to show that the government was taking a firm stand against Islamist extremism. Because of the ensuing witch-hunt, educational standards at the schools plummeted and many pupils were deprived of a sound education. They, and their futures, became the victims of the whole affair.

Like many such scandals, the story is a complex one, and this verbatim theatre version, written by Helen Monks and director Matt Woodhead in a co-production with Leeds Playhouse, is based on more than 200 hours of interviews with many of the people involved, including some scenes from the subsequent hearings. Clearly, those teachers and educationalists who were disciplined were victims of a gross miscarriage of justice. On the other hand, the play does not avoid uncomfortable truths: some teachers did make offensive WhatsApp comments and the needs of LGBTQ+ pupils were not always handled sensitively. The play does highlight one such relationship. Probably, many of the Muslims in leadership roles were sympathetic to a broadly Islamic approach to education. But they were certainly not extremists.

It’s hard to accuse a polemical piece of political theatre of being unbalanced, and the case of what happened in Birmingham is complex enough even in a simplified form. But it is obvious to me that the situation was mercilessly exploited by those in power, whether locally or nationally, to create the impression that the country was under threat, and to demonstrate their own hardline solutions. The piece gives a very good sense of how vindictive accusations by a disgruntled former member of staff can create a situation which spins out of control, imploding a whole city’s educational system. The case also suggests that the current rules about how much religion should be taught in school really do need to be rethought.

Over about 75 minutes, LUNG’s slick and well-paced production follows a handful of characters, such as a Muslim teacher, a pupil taking her GCSEs, a vexatious ex-head and a city councilor, on a rollercoaster of events, narrative, testimony, commentary, and dialogues. The stage is bare except for a large blackboard on which are projected short quotes and the five cast members play all the roles, switching from school uniform to coats, putting on hijabs and jackets as they slide desks around to create classes, meeting rooms, courtrooms, and offices. It is dynamic and smoothly effective storytelling and has an affecting theatrical simplicity.

Towards the end, the show does pose the highly charged question: are so-called Muslim values really incompatible with so-called British values? In fact, and this is utterly convincing, Trojan Horse argues that these ethical and moral systems are very similar. If you like, the greatest danger to Christian practice is not Muslims, but secularists and they don’t appear to be extreme at all. So while the play explores our fractured national identity, it also shows how minorities continue to be demonized, even as we proudly trumpet our apparent fairness and tolerance. Religion, however, battered, emerges as — to use Karl Marx’s phrase — the heart of a rather heartless world.

Watching this story, you are struck by how cynical was the relationship between Gove and Peter Clarke, the head of the investigation who was also the ex-boss of the Counter-Terrorism Command (with no experience in the educational sector) and the notorious Daily Telegraph journalist Andrew Gilligan. As the media storm rages, the excellent cast — Komal Amin, Mustafa Chaudhry, Gurkiran Kaur, Qasim Mahmood, and Keshini Misha — play the protagonists as well as several other roles each. This touring production, along with supporting educational activities, proves that some of the best theatre today is passionately polemical — and proud of it.

This article was originally posted at sierz.co.uk on November 13th, 2019 and has been reposted with permission. To read the original article, click here.