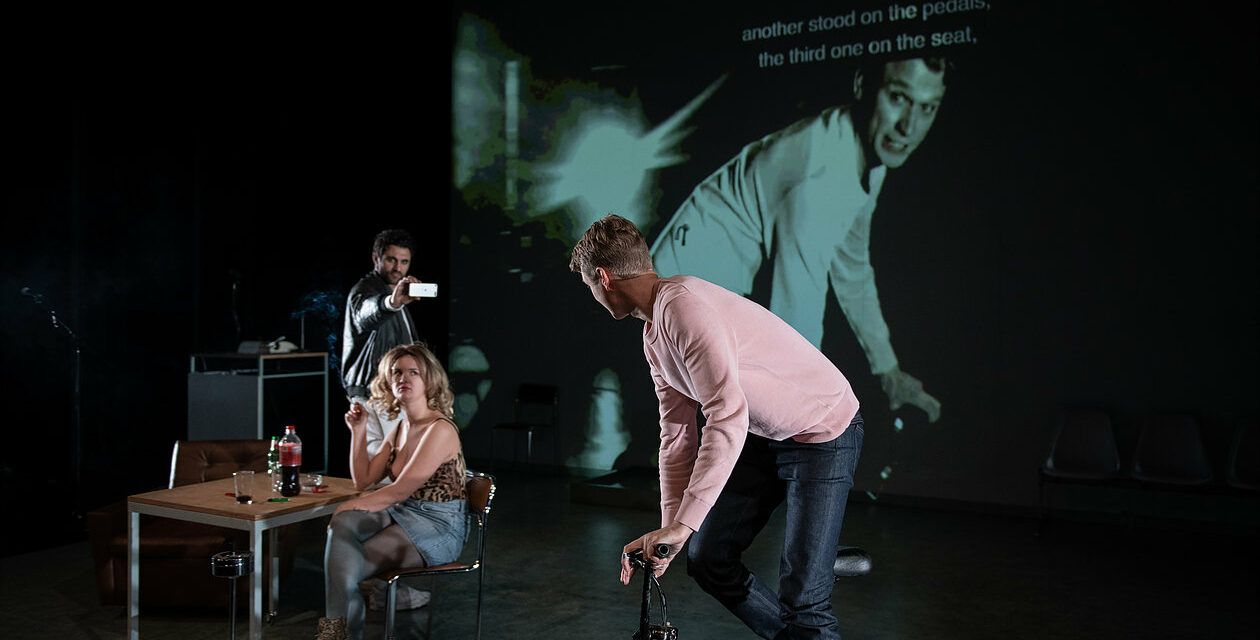 First of all, don’t be put off by the pompous, academic title. Thomas Ostermeier’s extraordinary History of Violence, adapted from a much-discussed 2016 novel by the 27-year-old French literary star Édouard Louis, dramatizes a harrowing and gripping story of rape and attempted murder set on Christmas Eve 2012. There’s nothing sleepy, distant, or pedantic about this Schaubühne production playing at St. Ann’s Warehouse (even if it is in German with English supertitles). It really ought to be titled Story of Violence.

Another suggestion: if you go (and you should), try to keep an open mind about the explicit representation of rape. Scenes depicting rape are almost always exploitative, I’m aware. Whatever criticality they might contain or intend is usually muddled by titillation. Ostermeier, though, sensitive as anyone to such contradictions, makes the violence here hideously realistic. It was the right choice. Seeing this crime in all its chaotic and shameful detail was the only way to keep it from sliding into metaphor, and allegory or metaphor would have softened and downplayed the particularized trauma that makes the story uniquely valuable.

History of Violence is a work of autofiction that novelizes an attack that the author actually suffered shortly after moving to Paris for graduate school at age 20. Finally free to live openly as a gay man and intellectual, he was the first in his family to attend university, proud but also a bit conflicted about his great escape from the ignorance, racism, and homophobic bullying of his working-class village in northern France. That escape—a self-discovering metamorphosis of Eddy Bellegueule into the pseudonymous Édouard Louis—was the subject of his debut novel The End of Eddy (2014), currently running in a British adaptation at BAM Fischer.

International literary stardom doesn’t get much more impressive than the coup of two adaptations of one’s first books running simultaneously in New York at high-profile theaters.

In France three years ago, the acclaim for History of Violence was mixed with controversy. As Jason Farago recently explained in a cogent essay-review of the book’s English translation in The New York Review of Books, Louis courted political notoriety as well as literary recognition and continues to do so. He has become an “implacable, immoderate opponent of Emmanuel Macron” and avid champion of the gilet jaunes (yellow vests), many of whom are poor, bigoted and from the same sort of provincial towns as him. Farago:

Louis is the boy who escaped the boondocks yet became its spokesman. He is a passionate writer, and outspoken on behalf of minorities in a country that pretends they don’t exist; he is also impetuous, self-regarding, and—at a moment of alarming crisis in France and across Europe—all too willing to support populist reaction over sincere political engagement.

In History of Violence, this schizophrenic perspective is seen in the character Édouard’s ambivalence over whether the man of Algerian background who attacked him ought to be prosecuted. The story—including a late-night pickup in the cold rain outside his apartment, hours of delightful, consensual sex before the violent turn, and vivid descriptions of Louis’s compulsive cleaning and reluctant visits to the hospital and police afterward—is told in a fractured, nonchronological manner in multiple voices.

Seeking family comfort about which he’s skeptical, Louis has made a rare trip home to his village, where he lurks behind a door listening to his sister Clara narrate the whole saga to her silent truck-driver husband. She is sympathetic but also judgmental, protesting too much about the family’s tolerance of his gayness, sniping about his newly acquired bourgeois snobbishness, and citing moments in the story that suggest maybe he just got what was coming to him. The importance of class difference is foregrounded in the contrast between Clara’s version of events and Édouard’s many corrections and comments inserted in italics as he eavesdrops.

So preoccupied is the book with dueling social codes that the rape, which occurs about halfway through, isn’t its climax. The emotional culmination is a long rumination on whether Louis should go to the police, which his intellectual friends Didier and Geoffroy (both well-known authors) push him to do but which he resists out of a philosophical objection to imprisonment and a conviction that a police report will “lock” him into a story that isn’t his own. He later castigates himself for fearing dark-skinned men on the street who remind him of the rapist Reda, calling himself a racist as if screaming at his sister or father.

All this grows frankly self-pitying and pedantic by the end; the book’s self-important title is no accident. Neither Reda nor Clara nor her husband nor anyone else other than the narrator is fully developed as an individual. They all end up seeming like devices arranged to prove the author’s theory of social determinism regarding the roots of violence in society at large. Farago understandably compares them to “players in a Brecht Lehrstück.” 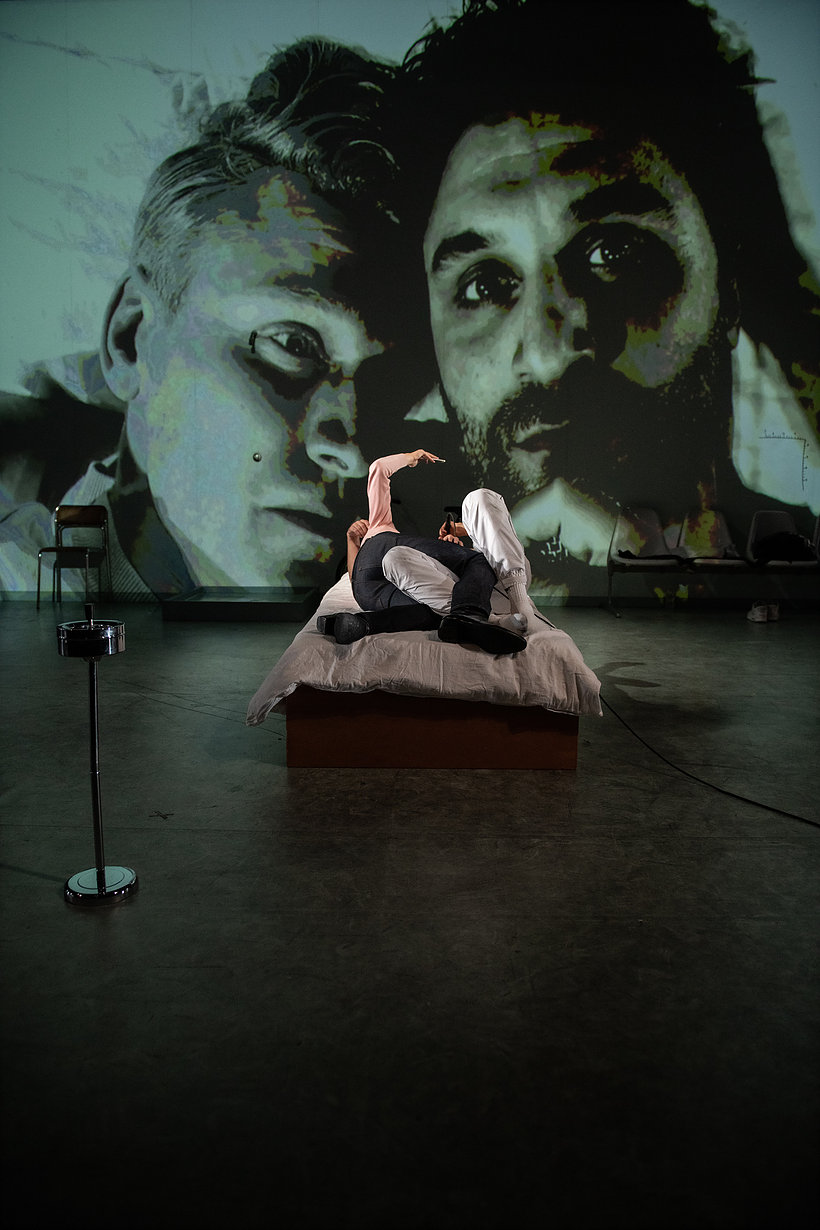 To his enormous credit, Ostermeier did not dutifully follow this structure. He looked past the novel’s pedantic imbalance and drew out the riveting traumatic tale at its core. His adaptation sticks closely to Louis’s language but maintains focus on the rape and its traumatic aftermath. Onstage, the narrative’s stream of manic, analytical rumination seems unequivocally like a symptom of trauma. The running political commentary isn’t cheapened or downgraded. But it becomes much easier to swallow in the theater as a swirl of ideas and reactions bouncing around the very active mind of a traumatized young man who was impulsive and manic to begin with.

Four actors perform in front of a wall-scale video screen constantly in use and alongside a live drummer (Thomas Witte) who adds enhancements throughout like a silent movie pianist. Wispy blond Laurenz Laufenberg, a ringer for the actual Louis, plays him in a plain pink sweater, and the other three (Alina Stiegler, Christoph Gawenda, Renato Schuch) play an array of other people from Clara and her beer-clutching husband to the police and medical officials Louis meets after his attack.

There is nudity and extreme intimacy in several scenes—the acting is searing—as well as a few lightly sketched moments that are scarcely less memorable and moving. (At one point, for instance, Stiegler plays a doctor who has kept Louis waiting unnecessarily for an hour; watch her face as she realizes her mistake and registers her regret.) Schuch is especially compelling as the brooding, hunky Reda, blending the confidence of age (he’s a decade older than Louis) with a completely believable brittleness of self-hatred.

The novel lends itself naturally to distribution of its prose into enacted scenes with dialogue. This may come as a relief to some viewers of Returning to Reims, another book adapted by the same team (Ostermeier and dramaturg Florian Borchmeyer) that played at St. Ann’s last year, with themes of homosexuality and colliding French social classes similar to those in History of Violence. In Returning to Reims, video played upstage as a lone actress (Nina Hoss) read the entire text by Didier Eribon (a friend of Louis’s and a character in his novel) at a table in a sound studio.

Video in History of Violence, by contrast, is an active element in the acting. The performers shoot each other with iPhones, often from point-blank distances, their live-streamed images blown up in extreme closeup on the upstage screen while we watch them live in various states of vulnerability, embarrassment, and uncertainty. The technique (whose smooth operation kind of amazed me) not only intensifies the kaleidoscopic storytelling, it also resonates beautifully with Édouard’s plural, unstable view of himself and with the pivot of the plot.

The character Édouard’s first hint that something is amiss with Reda is the discovery that his iPhone is missing. The iPhone, a device symbolizing bourgeois status, is something Reda, an off-the-books laborer and child of an exploited immigrant, couldn’t afford and probably hopes to pawn. This small act shifts the whole tone of the action, launching it on its climactic path of naked aggression. The shift happens so suddenly it might as well be a gunshot, or maybe more to the point, the results of an election that shocks the social class that regularly attends plays at the Schaubühne or St. Ann’s.

This article was originally posted at https://www.jonathankalb.com/ and has been reposted with permission. To read the original article, click here. 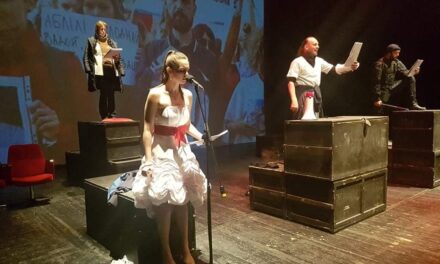