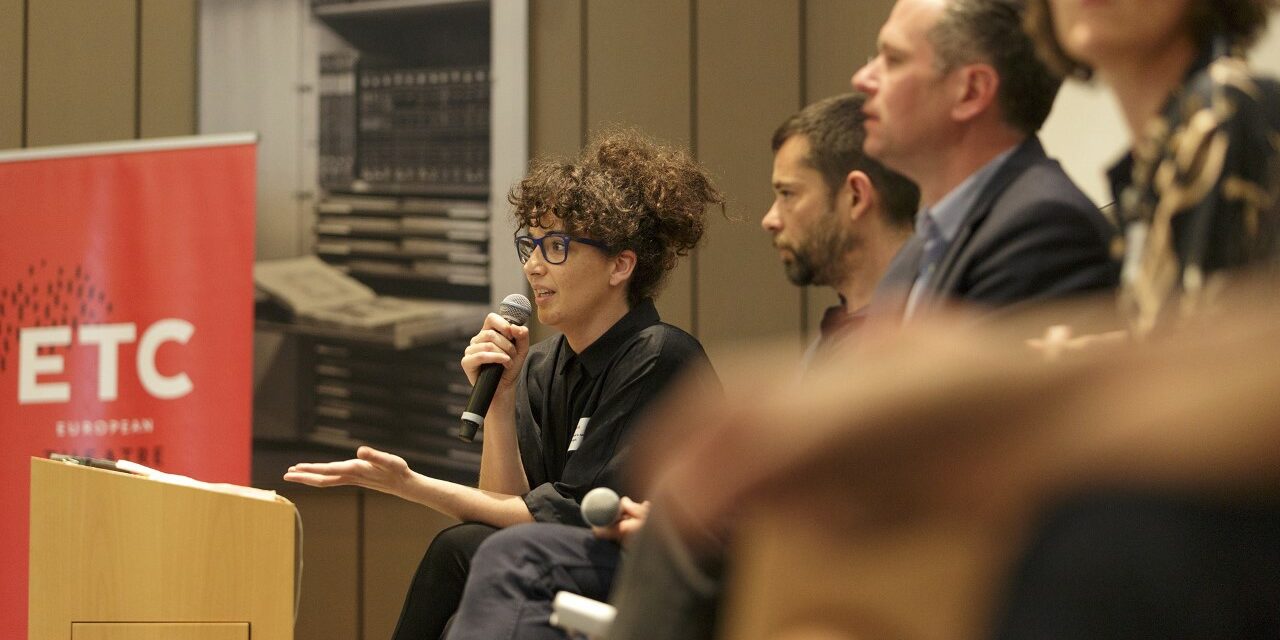 For the most part, theatre can be recognized as the art of the collective. The ETC (European Theatre Convention) is all about sustaining this collective, and at their annual conference between the 23rd-26th May in Dresden, Germany, they are proving that the collective is not only an integral part to the theatre, but that participation can also be a key component.

Described as ‘an artistic platform for creation, innovation, and collaboration’, the ETC functions as the largest network of public theatres in Europe. Today, more than 40 members from over 20 countries are participating in the reflection of the European cultural sector. Founded in 1988, ETC promotes European theatre as a vital platform for urgent and integral political and sociological discourse. This year’s conference is partnered with the annual ‘Our Stage Bürgerbühne’ Festival (see the other articles covering the events of the festival in TheTheaterTimes series), focusing on participatory theatre in Europe. Miriam Tscholl, the festival’s artistic director and curator, has highlighted that in the festival: “participatory not only means that the audience gets involved in the story being performed but that the average citizens themselves perform. The most important thing here is not the actor’s transformation but the life story being told – and this story can be explored, altered and questioned in a playful space without any consequences.”

For this article, I have condensed the vital information I deem most important from the outcome of the conference. Unfortunately, I did not have the time to see and experience every event on offer during the conference or the festival due to time constraints, and that is why some information might be left out, not for any malice reasoning. The information within this article is not to be considered as critical, but as a reflection, and this includes two of the performances I was fortunate enough to see as part of the ETC Conference and the ‘Our Stage’ Festival partnership. It is a dramaturgical analysis of multiple sources that are brought together to consider the current characteristics of participatory methods in European theatre. A full list of information on the ETC and the events of the conference can be found here.

Opening the conference is city dramaturg for the KVS in Brussels, Tunde Adefioye.

In his keynote speech, three terms became central to the definition of ‘urban dramaturgy’: Intersectionality, exotification, and de-/anti-/post-colonization. To Addtioye, urban dramaturgy is reaching out into the community, finding the smaller sub-communities within them, and finally, giving them a voice.

Drawing on the sources of the 2017 ‘Black Lives Matter’ movement, Adefioye’s description of intersectionality is that of a symptom of such an international movement amongst so much political corruption. In order to bring about the subject of colonization – his second term – his work has brought about an awareness of certain personal histories through a series of contemporary poetry workshops within the city of Brussels. In turn, an exotification – his third term – of the process occurs when we begin to question how to cast the present of our performance pieces with an awareness of our own history.

To Additoye, the center of urban dramaturgy is on the basis of reconsidering where the power exists in the center of such multicultural cities across Europe. Theatre that challenges the collective memory of our own history should be the forefront of performance programming. If urban dramaturgy exists, then I would like to be able to see what rural dramaturgy might add in the future, seeing how – in the United Kingdom, at least – more and more theatres are toying with the notions of producing more work in smaller houses outside of the greater cities.

Danish company ‘Fix & Foxy’ are built-up of a large group of creative participants and are headed by the artistic leadership of Tue Biering. Eliminating the boundaries of specific genres, they create performance pieces guided and influenced by a wide source of creative influences. Their current production – ‘A Doll’s House’ – takes the ideas behind ‘realism’ to gravitating new heights.

Led to a remote address just hours before the performance, the audience gathers outside a block of flats in the North Eastern area of Dresden. Here, a staging of Henrik Ibsen’s brutally honest Norwegian masterpiece will occur in the home of a real, non-theatre professional couple. Guided by the witty and impulsive minds of three performers, the couple invites the audience of around 20 people into their home, where we gather on the floors, sofas, and walls to listen to the gradual unfolding of an abridged version of the play. The couple – who will remain nameless for this article – have no preparation, no rehearsals, and no introduction.

What unfolds is an authenticated and systematic staging of Ibsen’s play through careful staging and line-feeding led by the three performers. The question is: can ‘realism’ – as Ibsen was so widely known for – be quantified when it is placed in a real and organic situation?

Rather than purely showing the validity of a classic in a contemporary context, this production is an example of how different space may be occupied. The performance required the audience to enter a private space and make that public, but both participants had to open their private space in order for it to become public. Furthermore, an interesting re-positioning in roles occurred. The audience and the participants had to actively become a part of the performance.

In not knowing the contents of the play, then a real rawness of emotion was evoked. Did the actors play with performers like live dolls as Ibsen might have otherwise anticipated? This remains a remarkable achievement of theatre with the power to provoke and unsettle, particularly when one member of the couple, in the final moments of having to leave her husband, broke down in tears. But this was not as part of the performance, but with the pure reaction of someone deeply affected by the situation and the narrative.

With the presentation of four artists from four different countries, a panel discussion ensued on the effects of participatory theatre in Europe, moderated by Stephan Hoffman (CO, European Capital of Culture, Dresden 2025), centered on questions such as: who are the people watching the people? Why do we wish to see cultural participation on stage? How do we begin to build relationships with citizens?

With a panel consisting of Raquel André (Portugal), Anestis Azas (Greece), Edit Romankovicz & Zsanett Horváth (Hungary) and Miriam Scholl (Germany), a variety of case studies are poised which point towards the above central questions. In this situation, the shared opinion is how theatre can, and should, take a position on issues in order to instill a political consciousness, and that the most effective ways of helping others is through storytelling. Of course, each creative has their own method of being able to fully develop and explore the mechanics of participatory theatre, but the general message is clear: art-based participatory research must tinker with the methods, locations, and people it works with, creating a diverse palate of tastes.

Miriam Scholl, representing the Bürgerbühne, believes that the art of participation in theatre stems from a personal interest in a topic. It has to have a wide appeal in order to begin becoming participatory. Much of what is discussed in this panel discussion is the very nature of building relationships between theatre and everyday citizens. She also believes that, sometimes, the deepest questions of our humanity have to be taught through humor.

In the discussion’s conclusion, it is agreed that reaching artistic freedom requires three elements: TRUST, HUMOR, and FREEDOM. Synthesizing these three elements, Scholl also states that citizens should be the active agents in deciding whether a piece will reach the stage. When this kind of power is given to the audience, then a real sense of participation is achieved.

Their current performance ‘Long Live Regina!’ is the result of a 9-month development process of therapeutic work with Roma communities. Through the performance, which is built-up of personal stories of Roma women, we learn about the struggles of the Hungarian health and social system. A description of the play goes as follows: ‘the family prepares for Regina’s 50th birthday. While cooking, her sisters and daughters tell each other episodes from Regina’s life, in which the performers’ experiences have been inscribed’.

Here’s a performance that brings about a searing honesty, with a rawness that can only emerge from authenticity. The visual stage elements that are brought together from the Hungarian-Roma community give a warm, homely-like state: a cooking pot, tables laden with vegetables and fruit, live and authenticated music. Drama existed even in the most mundane tasks, including gossiping whilst peeling potatoes at the kitchen table. But through ten years of communal work between social workers and the Roma community, they have allowed the stories of these women to be burst wide open, resulting in many of the participants of the process to perform in the production in Dresden but to also have them leaving Hungary for the first time.

Through the drama and the use of live scoring throughout with the playing of a guitar and a vocalist, we are given a rare glimpse of the spirituality in this piece, and how it is the love of home and culture that transcends all other beauty to these simple citizens. 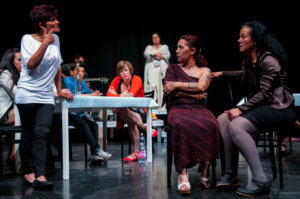 The Future for Participatory Theatre?

So, what to draw from the highlighted events of the ETC Conference 2019? In essence, the politics of participation within theatre are not to be determined on a superficial level. More than ever, the outreach programs of theatrical institutes and companies have allowed the processes of participation to become even more possible. But there are many elements of participation that have altered the definitions of certain vocabularies which allow such methods to be possible.

What we often see in such conferences is the need to further discussions and discourse on the way we view, create and present theatre. What we also often see is the same groups of people leading and participating in these discussions. What we do not see are those who are integral to these discussions be brought into the framework.

It is very difficult to be shaping the future dynamics of participatory theatre without a representative of the target participants.

The next appropriate step would be for the participating theatres and guests to continue to spread the new and varied ways in which participatory theatre can be manifested. The working methods are intriguing when discussed and debated, but are powerful when executed. Regardless, it remains integral that such networking bodies such as the ETC continue ensuring that such international methods continue to be delivered, shared and experienced. 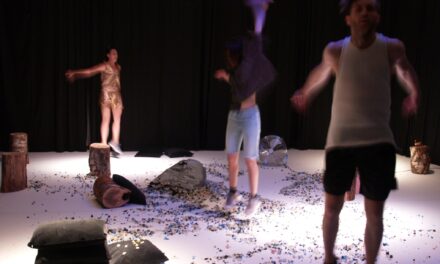