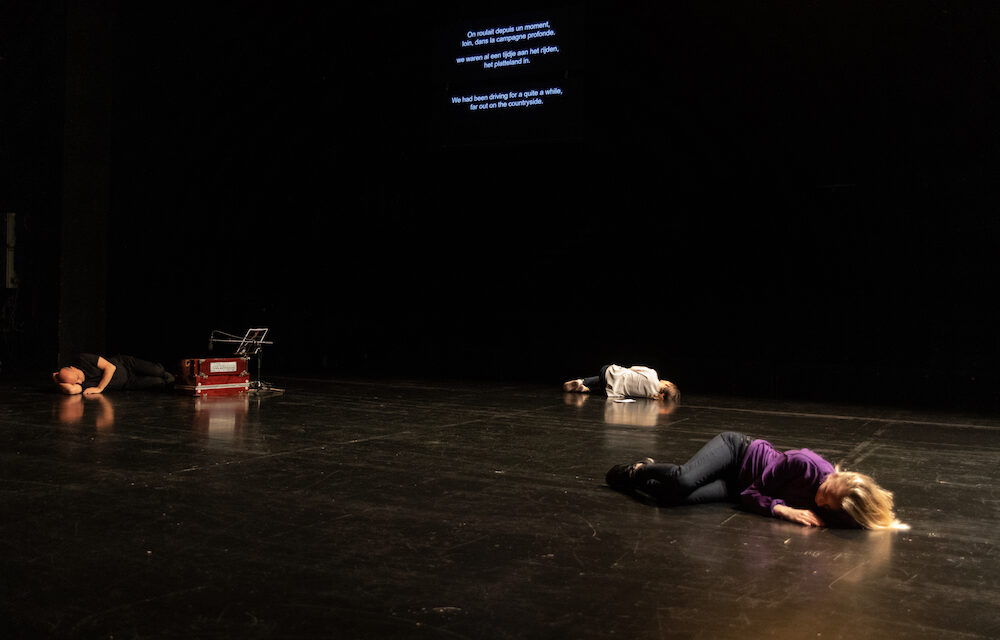 Penelope Sleeps begins in medias res. Three performers, lying as though dead onstage, and a small harmonium plus, I suspect, a Casiotone await you when you enter. You too take a seat onstage, the audience forming a semicircle around the performers, and you look out into the darkened auditorium where you usually sit during a theatre performance. Still lying with her back on the floor, Mette Edvardsen starts telling a story about a small spider in her parents’ guest room and the fear that this type of arthropod fills her with. Telling comes down to reading aloud: both Edvardsen and the audience see the text projected in three languages on a small screen that hangs front right.

The story about the spider is a first, indirect reference to the figure of Penelope, the wife of Odysseus, who waited for her husband for years while he traveled the world and waged war, and who, in the meantime, also kept a large number of suitors at bay. Like every spider, Penelope was a weaver (etymologically, the Greek word pēnē refers to ‘weft’). However, every night she would unravel the result of her work in order to start over again. The performance mimics that working-without-an-outcome: Penelope Sleeps is, according to its subtitle, an opera, but besides being about the idea of musical theatre, it is about the notion of operating, of writing or performing as the weaving of a text that is constantly beginning to fray.

Indeed, Penelope Sleeps strings together fragments of very divergent stories, without any real coherence emerging. At the same time, these often anecdotal tales resonate regularly with the figures of Penelope and Odysseus. For instance, something of Odysseus’s wanderings echoes in the funny story about the successful application for an artist’s residence in the frozen Antarctic, as in the story that Edvardsen tells about a chance encounter she had on an airplane with a nine-year-old boy traveling alone who didn’t want to tell where he lived or where he came from. Most of the stories are narrated lying down, which ties in directly with the title of the performance; this is given even more emphasis by the casual imitation of sleeping on the side, with bent knees. But the world of sleep is also that of the dream, which is characterized by the postponement of a definitive meaning through the juxtaposition, without much mutual logic, of narrative shards.

The strength of Penelope Sleeps lies in the combination of storytelling and musical theatre. Edvardsen’s rhythmical ‘readings’ are interspersed with songs that are partly narrative but above all reflective. The songs are almost all performed by soprano Angela Hicks to minimal, repetitive scores by Matteo Fargion (mainly known to us from his collaboration with Jonathan Burrows). Opera, therefore, in the sense of musical theatre, even though the sung pieces are generally in the register of the psalm and the lament. As a result, the performance as a whole is a bit like an oratorio mostly for one voice, alternately narrated and sung.

In line with the title, Penelope Sleeps is a fragile performance without a direct point: a loosely woven and unfinished tapestry of voices and stories, a linguistic resonance chamber in which the figures of Penelope and her husband, Odysseus, remain as vague as a dream from which one has just awakened. In this regard, the performance plays on the mode of the ‘in-between’ in more ways than one. You hear the telling or the singing, and at the same time you read the projected text, the result being that the sliding, never-concluded meanings nestle in the space between hearing and reading. This effect can also be felt when following an opera via the subtitles, for example, but here it has a much stronger and more autonomous effect (whether this effect was initially intended by Edvardsen remains an open question: she initially wanted the audience to take part in a lying-down position, i.e. to be only listening: Penelope Sleeps would then have been ‘theatre for the ears’).

The ‘in-between’ effect that Penelope Sleeps evokes mainly has to do with the created atmosphere of rest, restraint, slowness – with the at once cautious and focused construction of a situation between day and night, waking and sleeping, movement and stasis. The simultaneously calm and uniform rhythm of the narration and singing creates a quasi-ritual mood without any hint of elevation, an atmosphere you can sink into as in a dream – but then in a waking state. In this way, Penelope Sleeps opens up a time-space in which everything seems possible at any moment because what happens is introduced so unemphatically that many other possibilities resonate with it.

There is generally something forced about immersive performances: ‘you have to participate’. Penelope Sleeps, by contrast, is dominated by the implicit invitation to surrender yourself physically to the ‘in-between’ that erases the distinction between actuality and potentiality, act and dream, alertness and self-forgetfulness. To achieve this, the performance employs the weak, immaterial power of voice and language, their performative ability to affect and to incite participative, non-discursive thinking. The result is a special theatre experience that perhaps most resembles the reading of a good book, one that doesn’t want to carry you along and that steers you towards a waking involvement without any rhetorical display. It is in the choice of this type of thoughtful engagement of the audience, beyond any trace of moral beckoning, that lies the political relevance of Penelope Sleeps: this performance creates a utopian fold in time.

This article was originally posted on Etcetera on May 27 and has been reposted with permission.