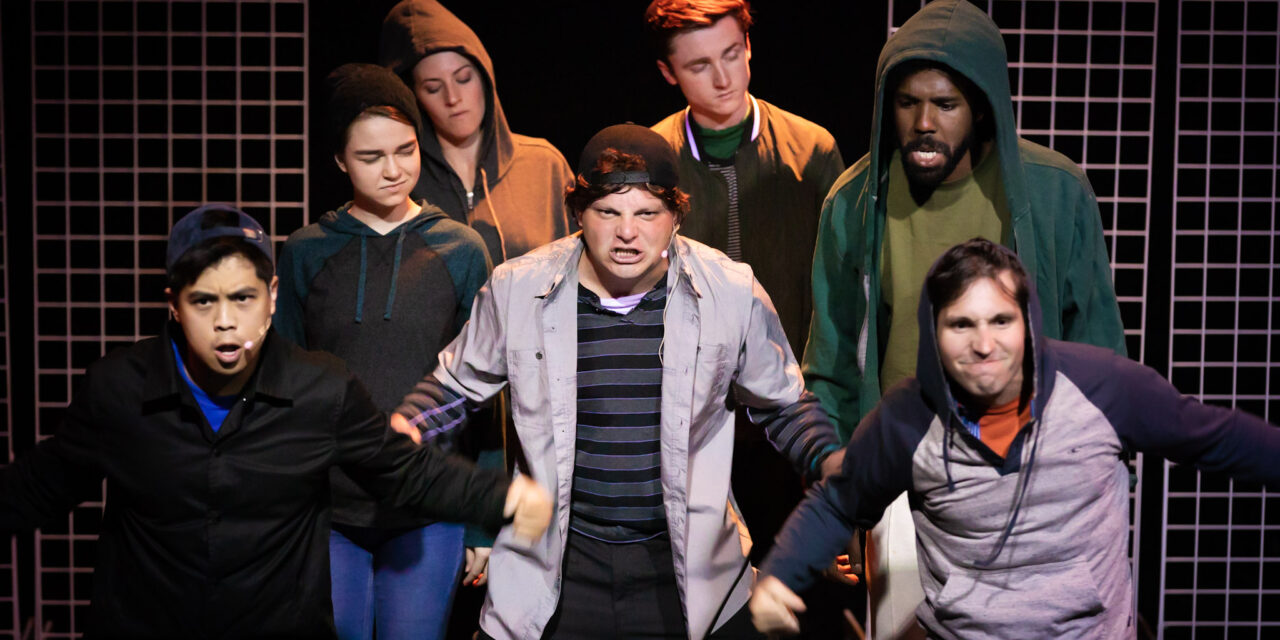 It’s Hollywood Fringe Festival time here in Los Angeles, and for those of you who are not familiar with this entity let me start by saying that the phrase “It’s Fringe” will be heard multiple times over in an echoing reverberation that never ceases to gain momentum between now and June 30th, 2019.  Not unlike Harry Potter’s powerful spell ‘Expecto Patronum’, this phrase has a magical ability to shape itself to meet all manner of circumstances – the good, the bad, and the just plain bizarre.  The official fest launches on the 13th, so that means it’s preview week.  There are 32 venues scattered throughout the intimate theatre district in Hollywood offering every kind of imaginable space – from those about the size of a minor celebrity’s walk-in closet seating about twenty to larger venues built to suit LA’s 99-seat companies.  Across the board, this festival is an “annual, open-access, community-derived event celebrating freedom of expression and collaboration in the performing arts.”  Some shows are presented by companies with their own theatres and/or regularly scheduled events throughout the year. Others are presented by people who have something they want to share – and something they want to say. 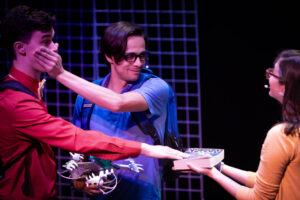 Enter  The Bully Problem by Michael Gordon Shapiro.  Selected as one of two new musicals chosen for the Stephen Schwartz Musical Theatre Workshop 2018’s Los Angeles program, Shapiro’s musical take on the inventive way 14-year-old Kevin Djykstra helps his computer-hacking, museum-loving, chess-playing fellows nerds avoid a life of constant torment at the hands of a group of bullies was also awarded first prize in New Musical Inc.’s 2018 Search for New Musicals.  [New Musicals Inc. is a group based out of North Hollywood that focuses on developing new musicals with a variety of resources].  Given all of the divisiveness and apparent support that is being given to those who engender hate in our society, this musical feels as appropriate for those of us long past the realm of high school as it does for those characters we meet in the play and it’s hard to argue with the wall of enthusiasm, energy and vocal talent an audience member encounters in this production [it’s a cast of 15 and they all know what they are doing]. 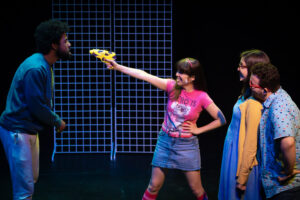 James Everts breathes exuberant life into Kevin, the precocious young robotics engineer in the making who wants so desperately to leave the school where he feels trapped and seemingly alone in favor of earning a full scholarship at an elite tech academy where he feels certain he will thrive and finally belong.  His father, Marshall Djykstra (Josh Hillinger) surprises Kevin from beyond the grave with the delivery of an advanced robotic entity in the person of Oscar (Jordan Mitchell-Love) complete with a letter asking his son to be careful not to let anyone know about Oscar – we get the sense that Papa Djykstra didn’t exactly acquire the humanoid robot from his workplace legally.  Determined to scholarship himself out of his unbearable school and into a place he seems certain will mean he becomes the best robotics engineer imaginable, Kevin first makes use of Oscar’s skills to fix glitchy issues in his scholarship project then learns that Oscar might be better utilized as a bodyguard for a group of nerds like Kevin that he meets in the school basement while hiding from the pervasive and delightfully cartoonish bullies that run the school in-between and after class.

Joanna Syiek directs and choreographs what ultimately becomes an endearing work.  The musical opens with a series of interactions via song that makes us feel like we are treated to three different openings with no clear sense who our heroes are going to be but once we settle on Kevin and understand he is our hero, it’s easier to buckle in for the ride.  The group of smart-kid hackers/geniuses/quirky characters that we meet in the basement is inhabited by a group of talented people who give their all to their parts and the minimalist set is used well, given the extreme limitations each Fringe show has for load-in/load-out (15 minutes).  However, knowing (as we do) that Kevin’s father told him to keep Oscar a secret, it seems a little emotionally off-base to see him use Oscar so publicly without a second thought.   In addition, some of the songs seem emotionally or dynamically tone-deaf, hitting the same beat multiple times, making it a challenge to really get where the change in these characters is coming from [the thing we love to feel the most in musicals]. 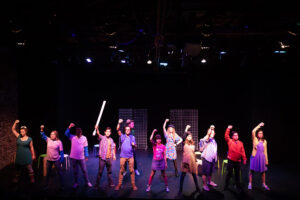 That same-dynamic-note problem is altered in a surprising and beautiful manner via a due between fellow nerd student Margaret (played by the absolutely wonderful Allie Costa) and Kevin, who realize via the song that they have a mutual interest in each other that goes one step beyond sheer geek-brotherhood.  It is the strongest song in the show, about what it feels like to, well, like someone.  The moment where Margaret ever so slightly extends her hand out from her side to be met by the stretching gesture of Kevin’s pinky finger – what feels like a canyon of space separating them even as we know it wouldn’t take much to make their hands meet – that is the kind of moment we go to watch plays like this for.  This moment, coupled with the fact that these performers are strong (though some are harder to hear than others for not all of them have microphones – for some reason) makes this worth the time to stop and watch.  The arc may not be clear, the logic of the story may be lacking and the audio at this preview needed some smoothing around the edges (hey, it’s Fringe).  It doesn’t feel like the next big touring sensation, but if you love watching people who know how to sing well together give there all for a little over an hour (including some solid choreography and character work), this is the Fringe slot for you.