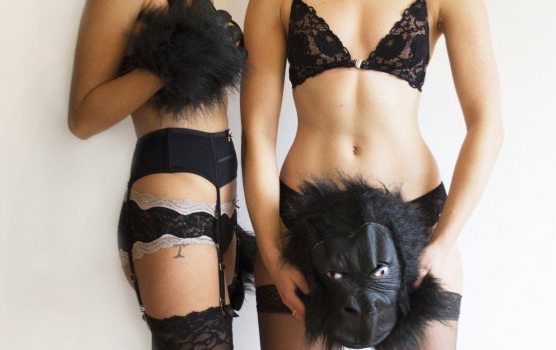 "Are There Female Gorillas?" attacks the standard of female hair removal.

The patriarchy has a lot to answer for, including what must be a ridiculous profit margin for the hair removal industry. Women have had it drilled into them, both explicitly and subconsciously, that having body hair is ugly and dirty. So we wax, shave, epilate, thread and laser ourselves to smoothness – and ingrown hairs, razor burn, and expense. Gorilla, the alter-ego of Girl, is sick of it.

But Girl is relentless in her war against her stubble and infuriated by Gorilla’s insistence that she love herself as is. Gorilla is frustrated by what she sees as the Girl subjecting herself to patriarchal expectations. The two want to get away from each other, but in this staging, they are handcuffed together and the key is long-lost. There are moments where they playfully get along but it’s mostly a tense and uncomfortable relationship.

Though not overtly stated until later on, it’s clear from the beginning that these women are two halves that make up a whole – or at least, it will be clear to women watching the show. There’s not a lot of subtlety in the script, but it effectively uses a range of forms, from spoken word to dance, to hold the audience’s attention. A simple story emerges that gives the piece a cohesive structure and clear ending even though it initially feels like this could be a Beckettian-style farce.

Sophie Ablett and Grace Strickland de Souza are Girl and Gorilla, as well as the co-creators of the piece. They have intimate and playful chemistry that can flip between fun and tension with little notice and are thoroughly engaging to watch. They are the strongest feature of this straightforward production that would be further enhanced by the addition of some nuance, but the core of the show is commendable in structure and theme.

This article was originally published in The Play’s The Thing on June 3, 2019, and has been republished with permission.