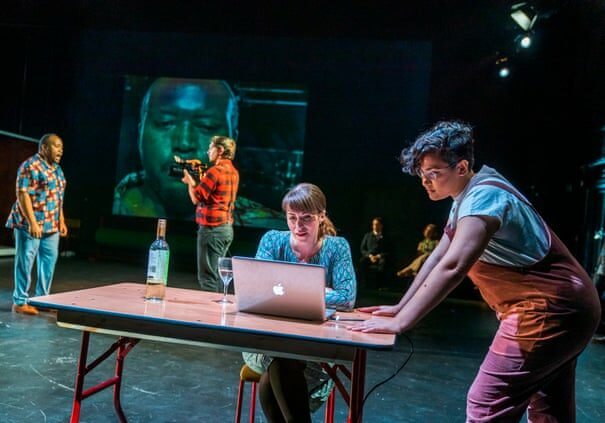 If theatre has a reputation for being inaccessible and snobbishly high cultured, opera is doubly regarded as such. Fortunately, the Unicorn and ENO teamed up to make this young people’s version of Dido and Aeneas, pared down to 60 minutes with an easy-to-understand story for secondary school students. However, the story is pitched as placing Dido’s teenaged daughter at the centre, but this version is not reconfigured enough to make her more than a passive observer of her mother’s collapse.

Though this is a concise, comprehensive version of the original with seamless orchestrations, a weighty melancholy interferes with characters’ connections with each other and stifles any sense of urgency. Even the transitions are slow. What could be furiously fast rage is instead casual sulking. As much as the mental health issues presented are important to the stage, they are shown here as middle-class and restrained with Dido’s sadness at the core of the story (and a white wine always at her side). With a recommended audience of 11+, younger secondary school students will be able to follow it, but are likely to not engage with it tonally. I could see older kids relating to its seriousness, but finding the story too simplistic.

The theatre is stripped to its bare, black walls; the cavernous space makes the bright, contemporary costumes stand out but the performers often seem lost in it. An abstract staging that has the potential for universality isn’t fully exploited by director Purni Morell, though a bucolic picnic scene where trees are flown in and a grass carpet is unrolled from a giant, upstage reel is a lovely exception.

With the pronounced disconnect between the plot and the mood, it is not clear exactly who this production is for. It attempts to make opera accessible to young people, but it hasn’t gone far enough to create a vibrant, engaging story for adults or children.

Dido runs through 2 June at the Unicorn Theatre, London.

This article is reposted with permission from theplaysthethinguk.com by Laura Kressly. It was originally published on May 15th, 2019.