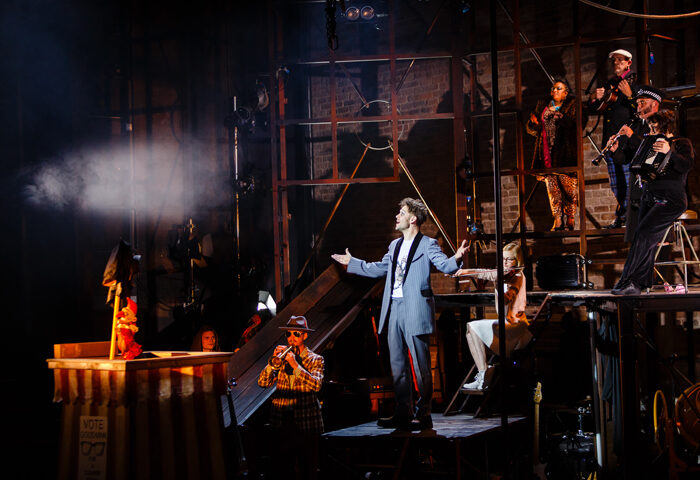 John Gay wrote The Beggar’s Opera in 1728 to reflect a London ridden with corrupt and dangerous politicians, inequality and violence. Not much has changed in those nearly 200 years, then. Kneehigh updates the story to a rundown coastal town where all the citizens resort to cold-hearted ruthlessness in the name of survival, resulting in an extravaganza of murder, betrayal, and spectacle.

This is a dark show – a really dark show. It bears more resemblance to a patchwork of Hamlet, Richard III and Macbeth (no doubt influences of Gay’s) than a contemporary seaside drama. No single character bears a consistent moral compass, that is if they aren’t complete sociopaths willing to destroy their own family for the sake of personal gain. Even the Punch and Judy puppets that mirror the characters’ subconsciousness, appearing and vanishing like sinister ghosts, are ruthless in their slapstick violence.

The opera documenting a businessman’s dealings and political agenda, and their effect on his family and others around him, gets full Kneehigh treatment, with live music from an on-stage band and actor-musos, puppetry and abstract, dreamlike design. Music and puppetry usually add levity to a production, but in this instance, they make the show all the more disturbing. The set adds to the mood as the performers climb, slide and dangle from a multi-level scaffold created by Michael Vale. Though it looks open and exposing, paired with Malcolm Rippeth’s lighting there are plenty of corners to skulk in and hide unseen. The show’s climax exploits the design’s capabilities in its fullest, resulting in a spectacular, destructive chaos.

Though it’s a long show at two and a half hours, it never drags and no point in the complex plot is gratuitous. The story is classical in its grandiosity and fantastical in its content, but considering that our world today is teetering on a tipping point – or perhaps has already gone over the cliff – where government-sanctioned murder and corruption is the norm in supposedly civilized nations, it comes as a stark warning. It also comes with stellar ensemble performances and a visual feast, making for a show that is both highly theatrical and political – an effective combination with a necessary message.

Dead Dog in a Suitcase runs through 15 June in London.

This article was originally published by The Play’s The Thing UK on May 28, 2019. Reposted with permission. Read the original article here