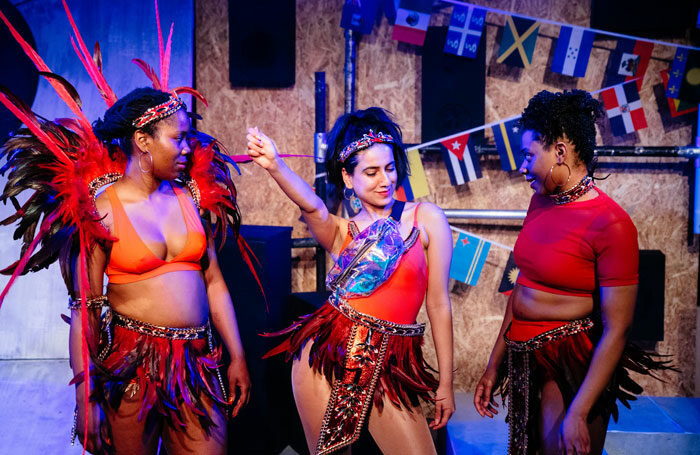 "J'ouvert," directed by Rebekah Murrell at Theatre503 in England, 2019, photo by Helen Murray.

Over the August bank holiday weekend, people of West Indian heritage have been celebrating their history and culture in the face of racial oppression since the 1960s. Bright colors, elaborate costumes, loud music, dancing, and lashings of rum mark the Carnival that’s now one of the largest in the world. In her female-led, debut play taking place over a day at Notting Hill Carnival, Yasmin Joseph pays homage to the people, young and old, that make up the event’s vibrant landscape and give it its soul.

Joseph makes three young women the heart of this snapshot of a day. They are members of West London Rising, a local, sort-of activist group. Sharla Smith plays Nadine, the narrator and central character who desperately wants to win the day’s competition for her costume and dancing but must deal with a gossipy Auntie and predatory men along the way. Jade is her quieter, angrier friend who’s still finding her feet in life; and Annice Boparai is Nisha, a posh girl frustrated by the lack of direction in the organization. They often bicker, but they also bond and lift each other up–they are authentic young women trying to find their place in a busy city that often disregards women and people of color.

Though the events that unfold take place in chronological order, there is no singular storyline that emerges. This is more of a day-in-the-life-of show centering on the main characters, so there is little direction and climax. Joseph employs lengthy, poetic monologues to evoke mood and add specificity to her wonderful characters, but higher stakes and some textual trimming would make this play much stronger by giving it a narrower dramaturgical focus.

The direction is often static, and the set design also doesn’t fully serve the show. This is clearly a production with a limited budget, but rather than trying to fudge a more elaborate set with elements of abstraction, a simpler concept – say, more of the flag bunting and music posters on black box walls – would give the actors more space to play and dance.

Despite its shortcomings, the audience loves it. This is a piece for people who feel Carnival in their bones and live Joseph’s references year after year. Laughter regularly rings out, along with knowing verbalizations and joining in with familiar sayings. For those of us less familiar with Carnival’s history – particularly the often-referenced “Mother of Carnival” Claudia Jones – we have homework to do on one of London’s defining cultural events.

We are also told at the beginning of the play that there have been numerous obstacles that arose over the rehearsal process. But like the women in the play—and in the spirit of Carnival—the production team did not quit. They kept fighting, making adjustments and compromises where needed, and picked themselves up again and again. Though the final product does not have the expected level of spit and polish, there is a lot to be admired, and no doubt the team will use these experiences to grow and improve a story that already brims with love and pride.

This article was originally published on The Play’s the Thing UK on June 6, 2019. Written by Laura Kressly. Reposted with permission. Read the original article.