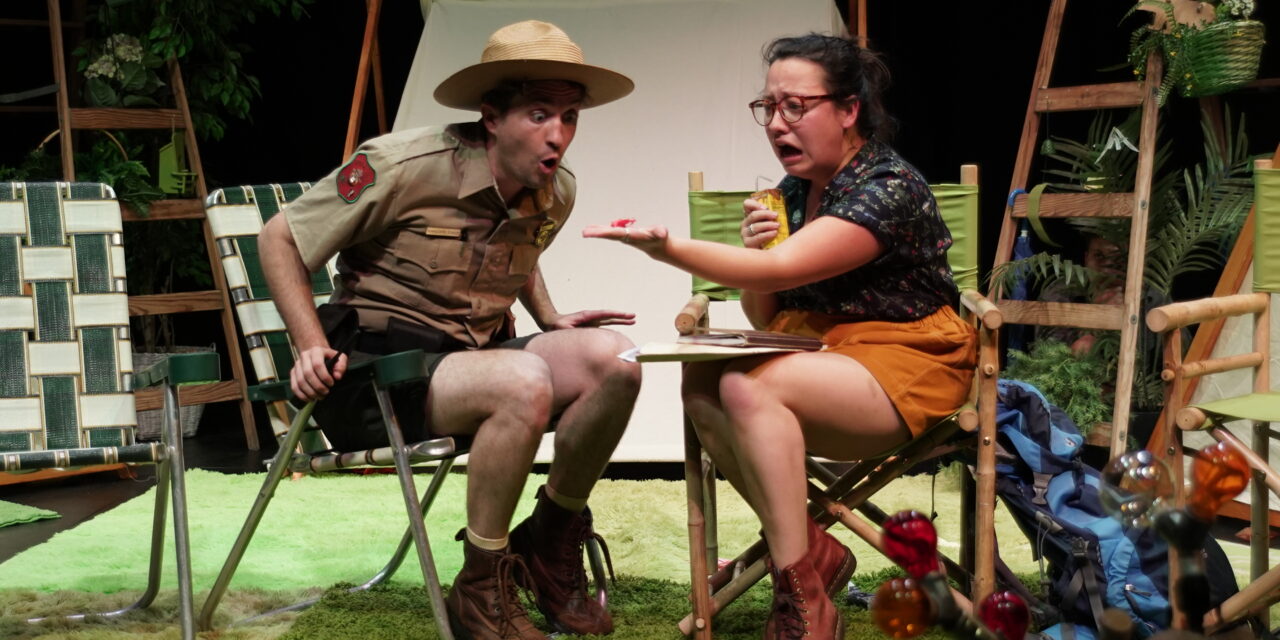 Somebody forgot to tell The Attic Collective’s production of The Last Croissant that they only have fifteen minutes to set up and tear down because the moment you walk into the theatre, it feels like a fully realized production settling down for a long run in a theatre it doesn’t have to share with anybody.  This show at Hollywood Fringe Festival already sets itself apart by providing a pre-show featuring the cast out on the street where you line up and wait for entry.  Thirty minutes before curtain, they sing campfire-like songs together and interact with the crowd, encouraging them to sing along as they ask if we are going camping with them.  We are, whether we meant to or not, and this zany play gives this cast of nine actors some really meaty bits to chew on as they sit under the stars, watch their relationships almost fall apart thanks to a series of misunderstandings, find a family when they discover the one they expected is not there and do all they can to protect the last croissant on the picnic table from what might be a bear – or might not be. 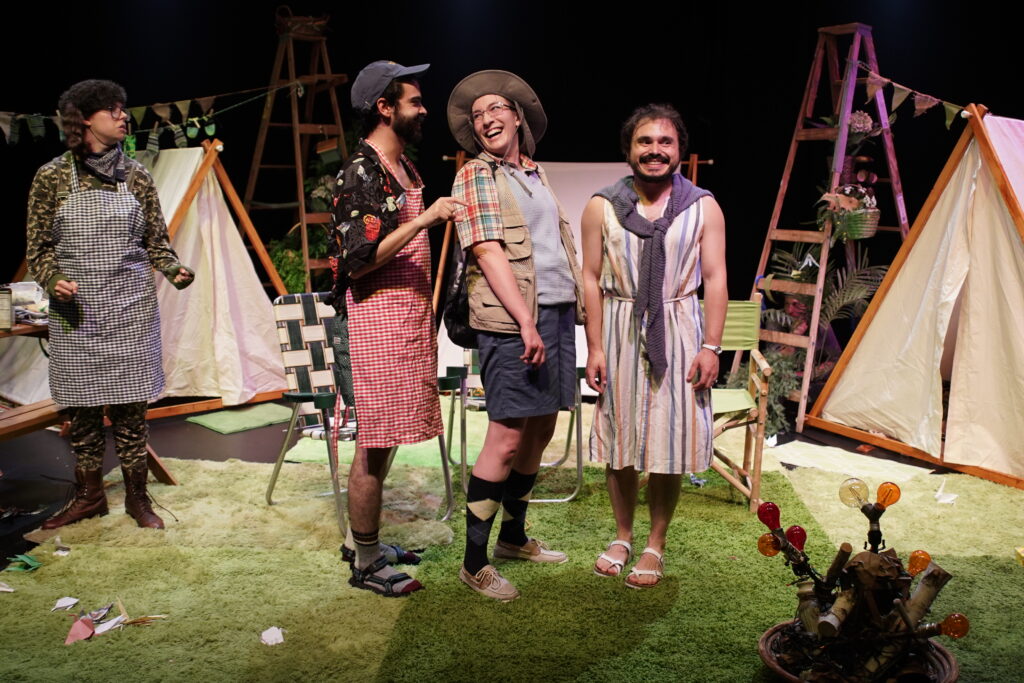 Written by Veronica Tijoe and directed by Rosie Glen-Lambert, the play doesn’t actually center on any single character but if there were one who we might pick out for that role it would be Veronica Tijoe as October/February.  We meet her as October first, a young woman who writes obituaries for a living who has come to this campsite certain she will find her parents in their usual spot but Ranger Dave (played by Conor Murphy) knows her brother February and lets her know their parents chose a vacation this year that didn’t involve camping.  Stunned, October admits her home is in danger of being consumed by a recently ignited wildfire and asks if she can set up camp.  Ranger Dave isn’t one to break the rules but he does agree to let her share a spot with two other families.  It is hard for him, as Murphy endows him with an air of innocence that almost makes you worry for the poor man.  Not only is our world less than kind to people like him, but the world of this play is also full of figures who could be his undoing at any time. 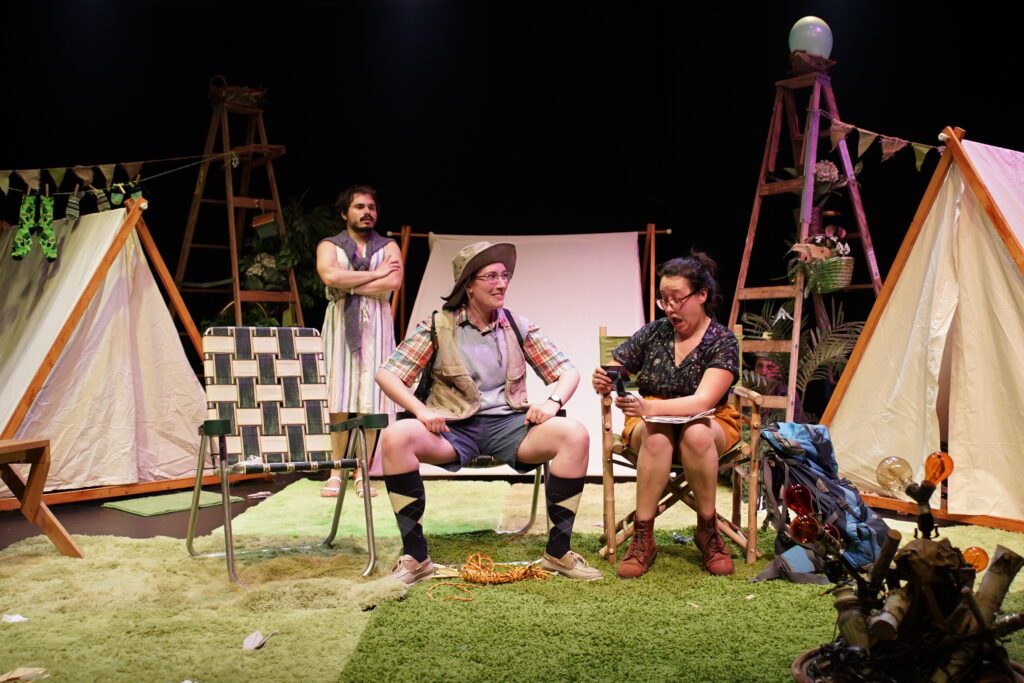 L to R: Luke Medina, Julia Finch and Veronica Tjioe in The Last Croissant. Photo by Rachel Rambaldi, courtesy of The Attic Collective.

October sets up her tent but The Postal Service (played by Taylor Bennett), who acts as a narrative framework of sorts begins to send origami cranes in her direction that will only increase in numbers over the course of the play and the more they fall out of the sky, the more unsettling it is for October who cannot figure out what they are supposed to mean.  She shares her campsite with Frederick (played by Julia Finch) and Imogen (played by Luke Medina), an older couple in the middle of a crisis that only gets worse the longer they stay there.  Imogen doesn’t understand why they had to go camping while Frederick couldn’t be happier thanks to all of the birdwatching opportunities around them.  He ignores her and she simmers with anger.  It doesn’t help that Frederick keeps paying their other campsite-sharing couple Mumbo (Meg Cashel) and Jumbo (Tyler Bremer) for bird-watching maps and supplies that Imogen feels are a complete waste of money.

Over the course of 90 minutes, each of the characters (well, maybe not The Postal Service) endures their own journey that includes overheard conversations that turn into misunderstandings, secrets that are kept from one another, and a general sense of not having the slightest idea what is the right path to take moving forward.  Mumbo wants to know where all of their food is disappearing to while Jumbo does his best to hide that he is, in fact, the culprit.  Imogen fears Frederick is having an affair while Frederick risks his life to prove that his quest is worth the time.  Both Ranger Dave and October are surprised to see February arrive.  A stoner who loves setting things on fire, he argues with his sister thanks to some clever use of in-tent shadow play and tries to assure her that his being there is going to be just fine but a sense of impending doom starts to permeate the moment he promises to put out a campfire.  We can’t be sure that he can be trusted.  And we are right.

In between, Imogen finds some solace in a conversation with a Teabag (played by Kat DeVoe-Peterson) and risks taking a swim in a nearby stream.  A Bear (played by Brandon Blum) visits the campsite and eloquently explains what food attracts him and the risks he is willing to take until he finds the last croissant and struggles to control the urge to devour it.  He loses the battle in what is one of the funniest bits of physical acting, and the loss of that bit of pastry plus the devastation that is the fire ends up forcing each of the characters to come to terms with their situations in their unique ways.  Truths are revealed, relationships are healed and though we never get to watch October open one of the origami cranes it seems even nervous she has come to terms with something that will set her on a better path.

The scenic designer is Lex Gernon.  Costume and prop design by Rebecca Carr.  Lighting design by Joey Guthman.  Sound design by Corwin Evans.  I’m not sure whether Evans or Glen-Lambert can be credited with coming up with the environmental sounds that both DeVoe-Peterson and Blum create when they aren’t onstage as their characters but the tapping of spaghetti, crunching of bags of pasta and other tools I couldn’t see from where I was sitting that Blum manned added a beautiful sense of environment to the piece that made it feel more immersive.