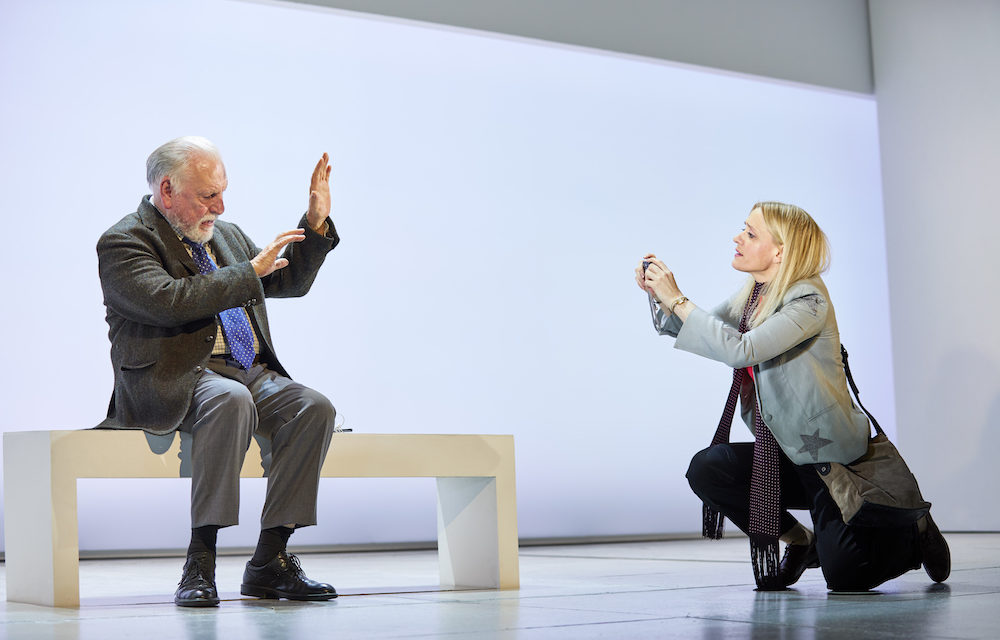 Playwright Simon Stephens and director Marianne Elliott are hyped as a winning partnership. Their previous collaborations include The Curious Incident Of The Dog In The Night-Time, a massive Olivier-award-winning hit, and her sensitive revival of his early play, Port, at the National Theatre. Now they are in the West End again, this time with a two-header starring Anne-Marie Duff and Kenneth Cranham. Despite the title, this is not a play about science, but about love, but it does concern chance. And uncertainty.

Inspired by a vague notion of the Uncertainty Principle (scientists, look away now), which suggests that chance is braided into the very fabric of the universe, Stephens has written a 90-minute rom-com about an unpredictable meeting, and its consequences. First staged in New York in 2015, the story is a simple one: on a crowded London station, Georgie (Duff), a 42-year-old American school receptionist, mistakes Alex (Cranham), a 75-year-old English butcher, for her lover. She approaches him from behind and kisses his neck. The only trouble is that he died some 18 months ago from a heart attack. She kissed a total stranger. It’s a mistake that could happen to anyone. And here it kickstarts their relationship.

Georgie and Alex are a typically odd couple. She is ebullient, erratic, noisy, a fire-cracker; he is stolid, careful and a bit of a stick in the mud. They should never get on, but they do. Each sees something of interest in the other, and — to adopt the metaphor of the play’s title — the very act of observation changes the other’s behavior. Both Georgie and Alex are stricken by loss: she has not only lost her lover, but also her 19-year-old son (who has left home); he has lost his wife, his mother when he was 17, and a childhood sister. Each sees in the other some material for healing.

What starts off as a simple encounter slowly turns into a deeper attraction, but money (lack of money, need for money) is the worm in the bud. A conflict erupts over not only money but also over how far they should take their relationship. After all, at the age of 75, how many more Christmases has Alex got? And can Georgie take any more loss?

At its best, Heisenberg tenderly touches on the feelings of old age, of winter love, of grey desire and momentary passions. At its worst, it comes across as portentous and unconvincing. I lost count of the number of declamatory lines such as “People worry far too much about what they are; they should be thinking about what they do.” At moments like this, and there are many, the play sounds like a self-help manual. As a playwright, Stephens has always loved the eccentric and the quirky, and most of his work has brilliant riffs on everyday subjects, but here he just sounds pretentious.

Despite the banality of much of the writing, there are some passages which work well: I liked Alex’s long litany of pop music styles, which starts off with rock ’n’ roll and ends up with dubstep. There’s also a moment remembered when two lovers connect, which is ironic because it is immediately followed by separation. Then there’s Georgie’s critique of Alex’s obsessive diaries. But whenever the dialogues seem to be improving, Stephens brings us down to earth with a bump; someone starts prattling on about how the Universe is “a circling whirl of gravity and matter in space.” See what I mean about banality?

Although this is a rom-com so you can accept the basic premise of a chance meeting, a lot of the incidental detail is unconvincing and the characterization felt, ahem, uncertain to me. Still, Duff and Cranham do what they can with the material, and there are several passages when they really seem to connect with the glinting eyes of affection or circle each other with suspicion and antagonism. But Duff’s accent is unlike any American I have ever heard, and Cranham indulges his Teddy Bear persona a bit too readily. On the other hand, you could just say: Fuck naturalism—and adore the production’s lighting.

Designed by Bunny Christie, with lighting by Paule Constable, Elliott’s production is ravishingly lovely to look at. Each scene is drenched in color, from the cool greyness of the railway station to the orange-red of a seductive meeting. Passion burns brighter red, but with a bluish hue of detumescence. Deeper blue tones of sadness accompany crying, while a deep green lights up a risky idea. There are some beautiful moments of movement (Steven Hoggett), with a delicate dance sequence, and evocative ambient sounds (Nils Frahm). At one point, Duff struggles symbolically with two huge walls. Bands of different hues suggest entire cityscapes. But these are just wonderful minutes; overall, the play feels paradoxically rather predictable.

Heisenberg: The Uncertainty Principle is at Wyndham’s Theatre until 6 January 6, 2018

This post originally appeared in Aleks Sierz on October 10, 2017 and has been reposted with permission.