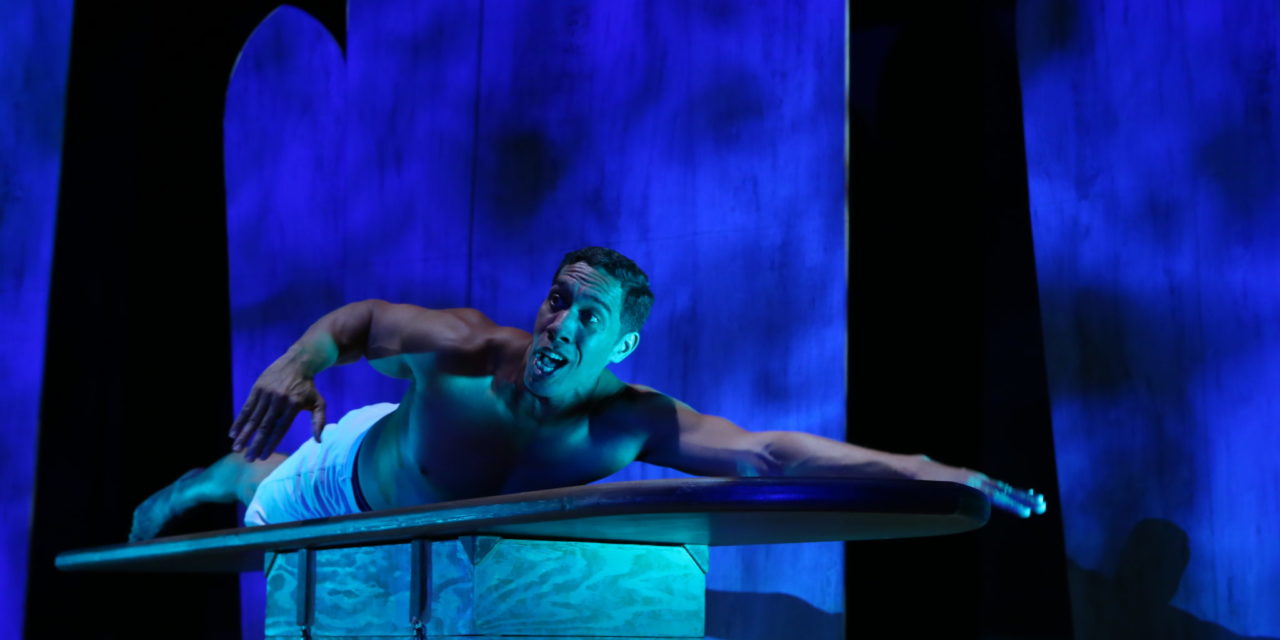 Popular images of Hawai’i are those of dancing women in provocative grass skirts adorned with coconut-shell bikini tops, palm trees swaying amid infinite miles of golden sand, surfers gliding on cobalt waters.  The reality of Oahu—the most densely populated of the 8 main islands which form the state of Hawai’i—is somewhat different.  While our ocean waters are always warm (with a year-round temperature of 83 F), traffic is a source of constant frustration and the high cost of living is virtually untenable.  Still, Oahu has all the convenience of any modern American city—24-hour grocery stores, countless dining, and shopping options—yet, if you drive for 10 minutes, you can seclude yourself in a tropical rainforest, or a tranquil sea cove.

In addition to being the most populous of the Hawaiian islands, Oahu also has the most in terms of entertainment options: hula halau regularly perform both kahiko and auana, slack key guitar and ukulele (an instrument which actually originated in Portugal) dominate the thriving music scene.  Stand-up comedy, improvisation troupes, international and folk celebrations, ballet, modern dance, opera, nocturnal gallery walks and art festivals abound.  Considering the size of Oahu, its entertainment scene is extraordinarily vibrant.  The same is also true of theatre, 8 companies regularly produce a season of work and a multitude of others produce work sporadically. 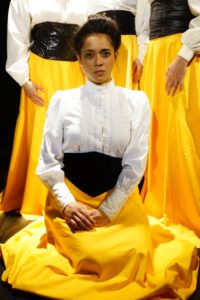 Danielle Zalopany as Princess Ka’iulani in the 2015 production of Ka’iulani at Kumu Kahua Theatre. Photo by Denise DeGuzman

For the visitor interested in gaining insight into Hawai’i, top of the list is Kumu Kahua Theatre.  In its 46th season, Kumu Kahua Theatre (KKT) is the only theatre in the world dedicated to producing plays by for and about the people of Hawai’i.  Kumu Kahua translates as “original stage” and KKT fills most of their season with original, world premiere plays by Hawai’i’s playwrights or plays highlighting some aspect of the local or Hawaiian experience.

Note: the notion of “local” culture is decidedly distinct from traditional Hawaiian culture.  Local culture evolved in response to the many immigrants who came to work the plantations in the 19th century: Chinese, Japanese, Filipino, Okinawan, Portuguese.  An amalgamation of these cultures and indigenous Hawaiian influences resulted in a ‘local’ culture with its own Hawaiian creole language—pidgin.  Another crucial aspect of life in Hawai’i and its mix of cultural influences is the fact that there is no one single ethnic majority; it is difficult to oppress the marginalized minority—near impossible to impose culturally tyranny—when there is no majority of one type of person.  Local culture is agglutinative and most families are a mix of ethnicities.  In Hawai’i, one can speak openly about cultural differences without peril—and few other places in the world can people get away with this.

KKT’s season reflects this mostly harmonious incorporation of influences: plays about the Japanese, Chinese, Filipino, Korean, Portuguese, Hawaiian experiences—and many others.  Historical and contemporary plays, plays in pidgin, plays in more standard English, and plays which parody aspects of specific cultures.  Kumu is also the word for teacher and source.  KKT regularly offers free workshops on playwriting, acting, auditioning and improvisation to the community.  Above all, the artistic standard is often very high at KKT (in terms of directing, acting and design.)  Their intimate black box theatre singularly provides a window into the culture of Hawai’i.

Nationally renowned, Honolulu Theatre for Youth is the only professional company on Oahu.  Honolulu Theatre for Youth (HTY) also produces plays of an extremely high artistic standard.  Like all great children’s theatre, their plays can be enjoyed by adults too.  Most significantly, under the artistic direction of Eric Johnson, HTY, like KKT, produces a season of plays which categorically supports and speaks to its community. Recent productions include: Anime Alice and Her Adventures in Wonderland, Duke (the story of legendary Duke Kahanamoku), and A Korean Cinderella (using K-pop songs). A Plantation Celebration is currently playing. 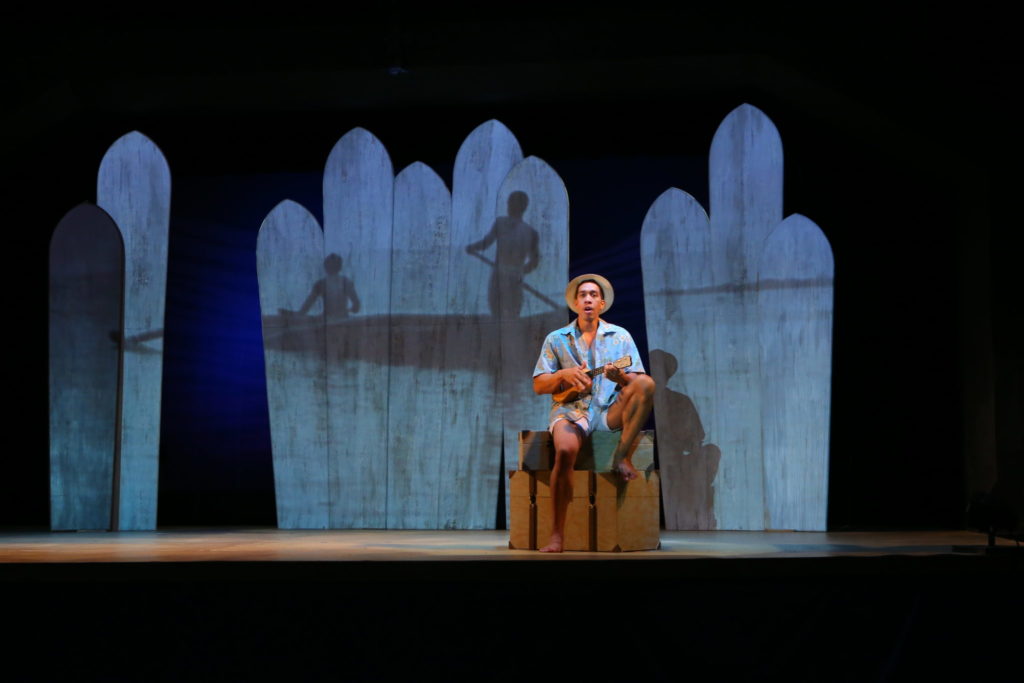 Founded in 1915, Diamond Head Theatre is third oldest continuously operating theatre in the United States, and the oldest of the companies on Oahu.  Diamond Head Theatre (DHT) is an off-Broadway size proscenium space, nestled on the gentle slopes of Leahi (Diamond Head crater), at the edge of one of the most affluent neighborhoods on Oahu.  Styling itself the “Broadway of the Pacific,” DHT’s season reflects their commitment to giving Honolulu audiences a taste of the Big Apple (without having to fly 10 hours to NYC.)  Recently DHT staged Billy Elliot.  Audiences at DHT are generally more interested in spectacle, stunning choreography, entertainment, and superb design than seeing their own stories onstage or some aspect of their own community reflected with profound insight.  Currently, A Christmas Carol is playing and Evita and The Little Mermaid are slated for 2017.

Situated in verdant Manoa valley, Manoa Valley Theatre (MVT) just closed their production The Elephant Man.  Stage Kiss and Rock of the Ages are next.  MVT’s season is often comprised of musicals, plays based on films, and a handful of Broadway or Off-Broadway hits.  Paliku Theatre, the “jewel of the windward side” is home to concerts, musicals, dance, two annual experimental plays and an annual Hawaiian Children’s Theatre play (most recently, Tales of the Ko’olaupoko and The Magical Pu Stealer by Moses Goods.)  The Actor’s Group (TAG), All the World’s a Stage, and a handful of college and high school theatres (Hawai’i Pacific University, Leeward Community College, Chaminade and Midpacific Institute) also regularly produce works. 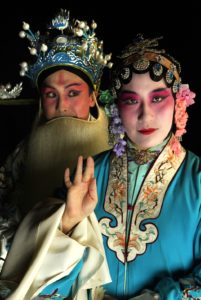 Historic downtown Honolulu and the surrounding area across from the harbor, known as Chinatown (today, mostly populated with recent Vietnamese immigrants), is home to KKT and The ARTS at Mark’s Garage (a performance collective and art gallery).  At The ARTS at Mark’s Garage, Burlesque, Burlesque satire, cabaret, spoken word, sketch comedy and long-form Improvisation shows run throughout the year.  (For example, Naked Women Reading or the wickedly entertaining Jane Austen Zombie Apocalypse.)  Also, in the historic downtown Honolulu area is Hawai’i Theatre.  Constructed in 1922 and listed on the Registers of Historic Places with exquisite Neo-Classical design, Hawai’i Theatre focuses on concerts and touring companies.

For unspoiled nature, Moloka’i, Lana’i, Kauai and Maui are excellent choices, though theatre is slim to non-existent.  For a combination of culture, entertainment, convenience, theatre, and unspoiled nature, Oahu is unquestionably the best.  If you travel, remember: while technically a part of America, Hawai’i is unlike much of the nation.  Hawai’i has the tragic distinction of being the only American state that was once a kingdom with its own monarchy.  In 1893, a group of American businessmen overthrew Queen Lili’uokalani, the last ruling queen in a line of Hawaiian royalty which stretches back thousands of years.  Annexed to the United States, Hawai’i formally joined the union in 1959, becoming the 50th state.  Hawai’i’s relatively recent political conversion, indigenous cultural influences, massive waves of immigration—resulting in a community of minorities without the single overwhelming presence of a particular ethnicity, and the lingering effects of Colonialism have inexorably shaped life—and therefore theatre—in Hawai’i.