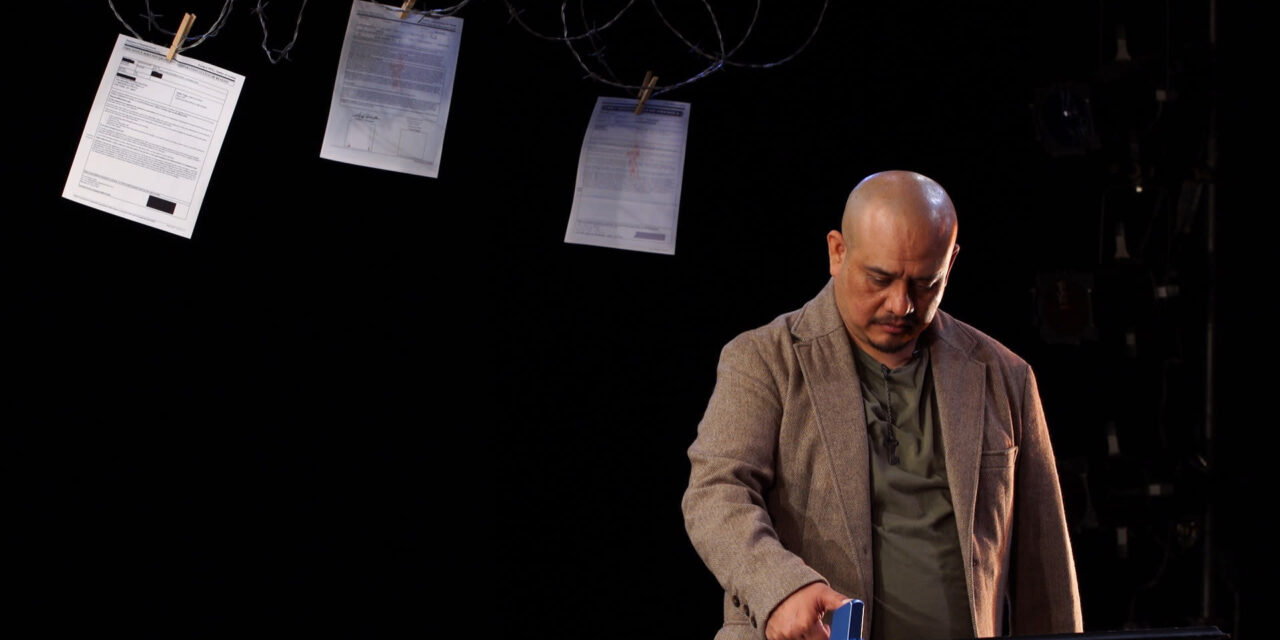 With so many screens in our lives it continues to be a struggle to find the inner strength to choose to commit to another one but the Center Theatre Group’s production of Alex Alpharoah’s “WET: A DACAmented Journey” is as powerful as virtual theatre can get and worth the digital journey. Crafted from his personal experiences as an immigrant who was brought to America from Guatemala when he was only 3 months old, Alpharaoh takes on every role as the story unfolds, from children on the playground who bullied him for not having ‘any papers’ to his father and mother, to his own daughter, shifting from childhood to adulthood, from gender to gender with ease.  It’s impressive to watch him take on each identity, especially in one moment when he takes us back to his life as a social worker in 2009 with a resident who reported physical abuse at the facility (though it is also a little uncomfortable to watch).   He had been managing to keep his head down and, as his mother says, not draw attention to himself until that resident’s report took him to the DOJ where he was first praised for filing it and then asked to provide ID that he didn’t have since he was not a citizen (something he notes he would have been if his mother had only come to the United States 6 months earlier – if you weren’t already stunned by the fact that he has been considered an illegal immigrant since he was 3 months old this reframing of his timeline will send that home).  He was arrested for using a fake social security number, one he had been using for 10 years.

Then came 2012 and Obama’s Dreamers Act, a piece of legislation that would have changed things for Alpharaoh forever – but he had a record.  His lawyer back in 2009 had gotten the DOJ to drop the felony charge for “falsifying a birth certificate for the purposes of unlawful employment” but that ultimately meant pleading guilty to ‘disturbing the peace’, noting the record would be expunged after two years.  Alpharaoh explains how he applied (with an application fee of $465), how they asked him to go to an immigration center to take his fingerprints and that he got DACA (Deferred Action for Childhood Arrivals) the first time in May 2013.  Besides his telling us that he had avoided immigration centers his whole life, we don’t really get to hear how that felt, nor do we really get a sense of what it meant for him in his life at that moment and there’s almost an assumption that we in the audience already have some knowledge of the process one has to undergo to run this gauntlet.  When Drumpf is elected, Alpharaoh likens it to Poland in 1939, which hits the discomfort nail squarely on the head again but there are elements to that correlation that fit.  The stinging wounds of Drumpf’s racist policies linger still so it’s easy to imagine how that comparison might come to mind.

In this political climate, things got complicated for Alpharaoh because his grandfather back in Guatemala fell ill and his mother wanted them to meet before he might die.  That meant leaving the country, without papers, trusting in the concept of family emergencies and ‘advanced parole’ (Alpharaoh explains it better than I ever could) in a time when reentry to the US is left up to the individual officer at the border.  If refused, he wouldn’t be able to come back for ten years.  It might not sound like it’s possible given what he is facing at this moment in the play, but as we hear about the labyrinthine maze of red tape and general nonsense he had to navigate to accomplish this in the timeframe he was allowed, you can’t help but laugh in the darkest moments even as you can feel the growing sense of panic.  At this point, we have to know that unless Alpharaoh arranged to record this piece in Guatemala via the Center Theatre Group, he obviously made it there and back again but we feel the tension grow to a near unbearable level as he expresses and faces his own fears and in these moments we are entirely with him and feel every bit as terrified. It’s possible we might have had that “Apollo 13” feeling in the theatre live (we know they ended up fine but we sit on the edge of our seats wondering whether they will make it) – but streaming this performance, being face to face on the other side of the camera, the gaze he meets repeatedly – that cements our emotional connection.  The plans he had to make in case he couldn’t make it back can break your heart.  The fact that he says he felt like an immigrant for the first time in Guatemala can make you feel angry toward this American government that doesn’t acknowledge that America is his home.  The visceral moments of fear will fray your nerves.  The moment he is able to visit a family member’s grave and share his feelings, tears streaming down his face that he does not wipe away, will stay with you long after the play has ended.

All of this said some moments feel rushed or overlooked – as noted above when he speaks about getting DACA for the first time (and what does ‘the first time’ mean?).  The stage features minimal pieces of furniture to indicate different areas where Alpharaoh might take on the role of his mother reassuring him as a child or his father at work painting cars but they are not dedicated to these roles so when we first see his daughter in the space where we met his mother, it takes several minutes for our brains to catch up and understand that we aren’t seeing a mother/son exchange but instead a father/daughter one in a different time.  The choice to cut away from Alpharaoh just after he faces one of the most gut-wrenching moments of the play to the auditorium where each seat has been prepared with a photo of an immigrant and details about their lives and deaths may have felt like a strong one but it actually diminishes all that we have built together in our virtual space.  We don’t actually get to know how he got in, what he had to say, how long he waited, what he felt while he as kept waiting – and we don’t have enough time to read all of those papers in those seats, which ultimately diminishes their presence as well.  Alpharaoh was more than enough, his story was utterly compelling, his being so powerful and charismatic that we did not want to look away from him or lose that connection.  It’s a jarring choice.

The play takes a strong stance re: what Drumpf (or as he only ever is referred to here ’45’) did to DACA, noting it is a ‘side effect of US Imperialism” and that there are still human rights violations being carried out in 46th’s administration but Obama’s legacy is never mentioned here and we know that slate is not clean.   The production values are strong, as they are always at the Center Theatre Group with a painted background that helps illustrate when we are in Guatemala vs. America, which also points to how connected we all are.  There were many moments where my mediocre Spanish skills came in handy for often there were no subtitles to help us out when dialogue in Spanish replaces English.  Overall, this is the best possible time for a story like this one, from a theatrical voice who isn’t afraid to call a human rights violation by its name.

“WET: A DACAmented Journey” written and performed by Alex Alpharaoh and directed by Brisa Areli Muñoz.  Presented in Association with Ensemble Studio Theatre/LA.  Sammy Ross is the Lighting Designer.  Martín Carrillo is the Sound Designer and Composer.  Tyrone Davis is the Associate Artistic Director.  Jennifer Franco is the Stage Manager, Maggie Swing is the Assistant Stage Manager.  B. Rubén Mendoza and Francisco Tejada are the Directors of Photography.  Wil Prada is the Camera Operator.  Erik Johnson is the Editor.