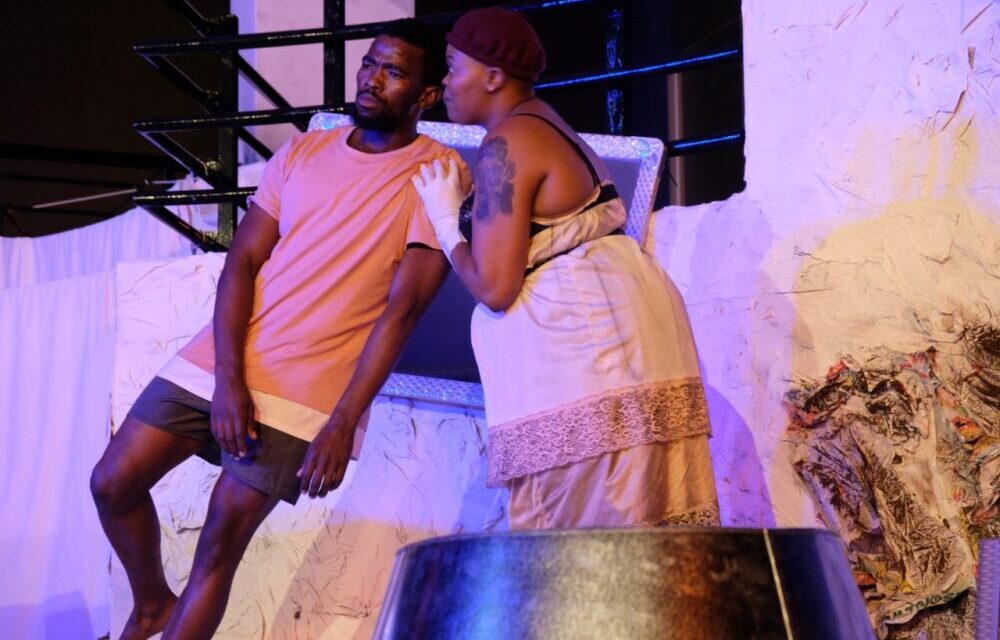 "The Princesses of Askies Shem Street" was written and directed by Khutjo Green (Photos by Tin Town Theatre).

The Princesses of Askies Shem Street written and directed by Khutjo Green is one of four productions currently showing at the Tin Town Theatre (NPC) in Johannesburg with the others being Jefferson Tshabalala’s A Tribute to Ikas’ Lama Kasi, Masai Lepuru’s The Tragedy of Samuel Omunye and Ayabonga Makanya’s Induku.

With such a wide array of productions on offer the Tin Town Theatre (NPC) continues to be a space where “creativity meets inspiration” as per their motto and as evidenced by their strategic and deliberate the staging of freshly minted productions some of which are making their world premieres.

A few of the productions on show have previously been showcased as ‘staged readings’ within the same space so to see them as fully fledged theatrical productions is testament to the ethos of Tin Town Theatre (NPC) and indeed other independent theatre spaces such as TX Theatre in Thembisa of providing platforms for the staging of new work. The story of The Princesses of Askies Shem Street is set in a township laundromat and lays bare the lives of the various colorful characters who are part of this eclectic community. What makes the story vividly engaging is how it is so recognizable and how its characters are seemingly ordinary yet relatable people who are trying to navigate daily life and its challenges in creative ways.

Khutjo Green’s unmatched storytelling prowess is on show coupled with her refreshing directorial eye which makes the story sad yet beautiful, humorous yet serious and urgent yet routine. Each of the characters not only embodies their character impressively but further distinguishes themselves by how they also have mannerisms (physical gestures) peculiar only to themselves.  The Princesses of Askies Shem Street is not a physical theatre piece in the traditional sense, but it does borrow though sparingly from that proud theatrical tradition and ultimately pushes its conventions further to tell the story this production needs to tell.

Khutjo Green’s brilliance in creating and depicting the world of the play shines on multiple levels with the most striking being the costumes which depict an almost surreal yet on interestingly mundane environment. The sights and sounds of a typical laundromat dominate the narrative from the whirring of the washing machine to the splashing of water as garments are either rinsed or folded all of which sprinkle magic on an already captivating story.

The Princesses of Askies Shem Street was written and directed by Khutjo Green (Photos by Tin Town Theatre).

The Princesses of Askies Shem Street also introduces the inimitable talent of Buhlebendalo Mda from leading acapella group The Soil who plays the central role of ‘Mamshella’, the likeable proprietor of the laundromat. In swopping the microphone for a monologues Buhlebendalo Mda does a splendid job and is one to watch as she spreads her wings outside of the familiar musical circles which she has reigned over with aplomb and grace.

In the end The Princesses of Askies Shem Street is not a story of victims or victimhood, but rather of women who take life by the scruff of the neck and make it what they need it to be without allowing the circumstances they find themselves in incapacitate and debilitate them by taking away their agency.

This article originally appeared on The African Theatre Magazine on June 7, 2021, and has been reposted with permission. To view the original article, please click here.