The Need for Supertitles or Not 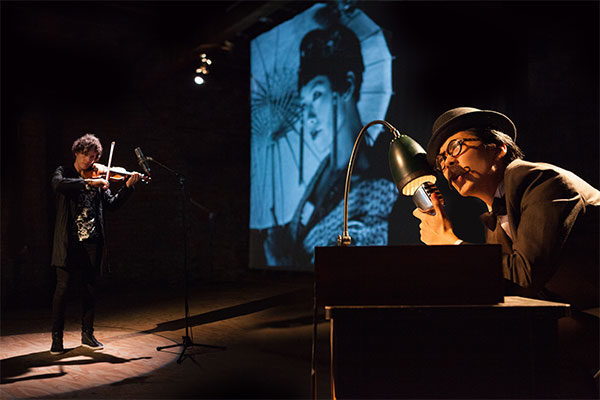 Two shows recently seen at the Under The Radar festival in New York gave me the opportunity to reflect further on the need for supertitles in order to fully appreciate contemporary theater pieces from home or abroad.

Club Diamond, a new stage work by Saori Tsukada and Nikki Appino, seen at the Public Theater, was especially interesting to me in this respect.  The play begins with the showing of Appino’s silent film about a beautiful Japanese immigrant who comes to America hoping to become a star and ends up working in New York City in a sleazy joint called Club Diamond. Violinist Tim Fain accompanies the film with sweeping melodies that perfectly capture the melodrama of the scenes taking place on the film. Tsukada plays the role of Benshi, a famous live narrator of silent films in Japan in the twenties and thirties. Speaking at breakneck speed, in Japanese, she animatedly and enthusiastically tells us what is happening on the screen.  However, there are no supertitles to help the audience follow what she is saying.  In an interview, Tsukada disclosed that the Benshi enjoyed making up their own script to the films that they narrated, regaling the viewers with stories and gossip that had little to do with the tale being shown on the screen.  Speaking of the absence of supertitles in Club Diamond, she explained that she isn’t trying to get people to understand the Japanese but rather to appreciate the piece on multiple levels. The silent film in the center as a visual aide together with Tim Fain’s music to the right of the screen and Benshi’s performance on the other side, create a richly layered score

In the last part of the show, Tsukada becomes a Kamishibai man, a Japanese street performer who puts on a paper play for children. This comical figure arrives in towns on a bicycle complete with a miniature stage and a number of illustrated cards with which he tells his stories by sliding them through a wooden frame.  He also sells candies and if the children buy his candies, they get to see his show up close.  Tsukada hawks his wares in Japanese, speaking directly to the audience with the skill of a true salesman, to try to get them to buy his candies. Again there is no translation but, thanks to Tsukada’s vivid physical performance along with the colorful, illustrated cards, we understand more of what he is saying as compared to Benshi’s film narration.

Perhaps translation is not necessary to understand these passages in Japanese. It is clear that the show deals with the experience of many immigrants who have to face a language barrier when they come to this country not to mention so many other obstacles. Tsukada actually worked at Club Diamond when she first came to New York.  Inspired by her personal story, Club Diamond leaves us with a visual homage to those who have experienced the hardships of immigration throughout the world.

Seen at the Kitchen, Philippe Quesne’s Mélancolie des dragons, featuring the delightful Vivarium Studio players from France, also raised questions of a possible language barrier. Originally performed in French when I first saw it in Avignon, I assumed it would be in French again with supertitles. Instead, and this was a wonderful surprise, Quesne’s actors delivered their lines in French-accented English.  Some of the actors were more fluent than others, but it didn’t matter. In fact, their tentative English just added to the fun. 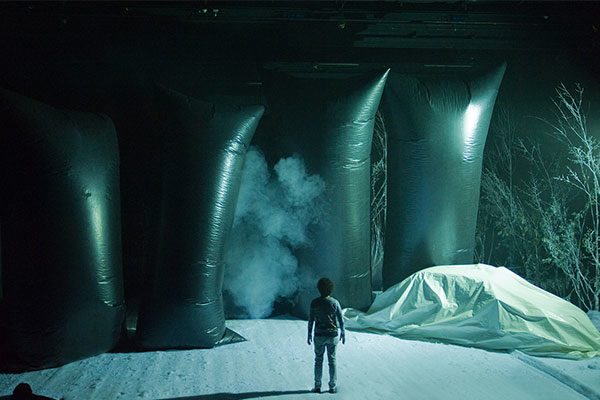 The play features a group of longhaired metalheads on their way somewhere to set up a traveling theme park. As the play opens, we find them stuck in a visually stunning winter wonderland. Their car and trailer have broken down and they are unable to continue their trip.  Unperturbed by their predicament, they are content to sit in their car listening to rock music, drinking beer and eating chips until a mysterious stranger, Isabelle, appears out of the forest. She volunteers to take a look at the car’s motor as the men stand around. Exchanges between Isabelle and the guys are mostly wordless at this point as she takes out loose hoses and other paraphernalia and hands them around. They will have to wait a week for a replacement part so they ask Isabelle if she’d like to visit their theme park. “Oh yes!” she eagerly responds.  Isabelle is the perfect fan.

Every time the men run over to one of their “amusements,” they call out to her: “Isabelle, if you want we can show you,” pointing to various attractions which they introduce straightfaced: wigs hanging on the stage that wave in the breeze, a lending library filled with serious volumes as well as children’s pop-up books, bubble and smoke machines, a slide projector which they plug into an electrical outlet hidden beneath the “snow,” and giant inflatables. She appropriately responds  with “oohs” and “ahs “ and ”wows.” The metalheads’ childlike enthusiasm and Isabelle’s delight in everything are contagious. It is a treat to watch wide-eyed Isabelle as she marvels at the bubbles that disappear as fast as they appear. Thanks to Philippe Quesne and his company, the audience  discovered a world in which the ordinary is magically transformed into the extraordinary.  Clearly, supertitles would not have been necessary to appreciate this beautiful piece, even if Quesne had presented his show in French. 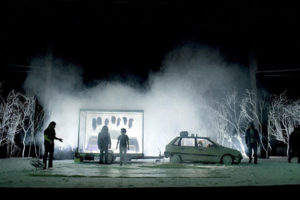