An entire car covered with snow, a group of potato chip eating metal heads, a woman who climbs inside a car’s engine, scrupulously selected metal and classical music throughout, wigs on strings hanging in colored light, intentionally arranged bodies with the most mundane of gestures, and bubbles and smoke make up some of the charming wonders and striking visual images from French director Philippe Quesne’s La Mélancolie des Dragons, presented by The Public Theater’s Under The Radar Festival from 10th-14th of January at The Kitchen.

Using a large prop that exists somewhere between a poor person’s Mummenschanz puppet, one of those air-filled, arm-waving customer attractors found at a used car lot, a frozen ice pack, and a enormous piece of frosted shredded wheat, this company manages to create something graceful, beautiful, and funny with sheer theatrical force of will. And sheets of plastic. The human desire to connect and share, however, seemed anything but plastic.

Although the movement was quotidian, the stage pictures were perfectly attended to, and just occasionally, the excellent ensemble of a cast revealed how on point they were in their studied banality: the slam of a car hood precisely on beat to the music, ski poles piercing the snow with exactitude, a stunning performance on a plastic recorder.

For the layperson, not ensconced in theater or theater history, La Mélancolie des Dragons offered a gently broken, wistfully delicate look at a group of heavy metal aficionados whose sole purpose seemed to be to create an experience for imagined or future fans. Abandoned and stranded in an unknown hinterland where a missing distributor cap from their 1990 Rabbit would take seven days to reach them, seemingly with only Budweiser and Lays potato chips as sustenance, these seven gentle metal-heads reveal their “amusement park,” an odd dream they’d created, to the woman, Isabelle, who shows up. She first circles the perimeter like a curious and wary forest creature, then knocks sharply on the hood of their car to wake them.

For this experienced theatergoer, the mischievous flirting with the fourth wall was refreshing, and the unmoored and somewhat helpless lives of the characters took on a deeper resonance when Artaud was mentioned: the bodies onstage were the actors signaling through the flames, fully doubled in their representation – as both the impoverished character and the artists on tour – creating worlds with little more than inflatable sheets of plastic, bubbles, a smoke machine, a ladder, and several wigs.

And while, for many audiences, the penultimate large image might point to the hardcore band Black Flag’s logo (with a message of resistance, and even the monoliths of 2001 or Arrival ), the final lit image of Gaëtan Vourc’h’s face was like that of the iconic photo of young Artaud in Jeanne D’Arc. Pious, simple. Looking up to an absent god, questioning the sacrifices made for an art form as the name for the amusement park was chosen for the night.

The refrain of “if you want we can show you” was repeated throughout the delicate unfolding of the piece. The audience, as with the character of Isabelle, is led through park attractions, which though absurd, are presented with such earnest offering, that they’re difficult to refuse. Strange humor was often present. And, as Isabelle says, while walking through a fog created for wonder number four, “it’s possible to disappear,” and give over entirely to the delight of the piece.

Amanda Boekelheide is theater lover with her MFA from Columbia University. She can be reached at ab2353@columbia.edu. 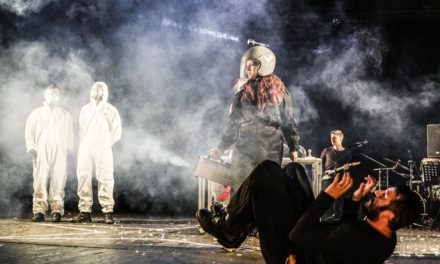